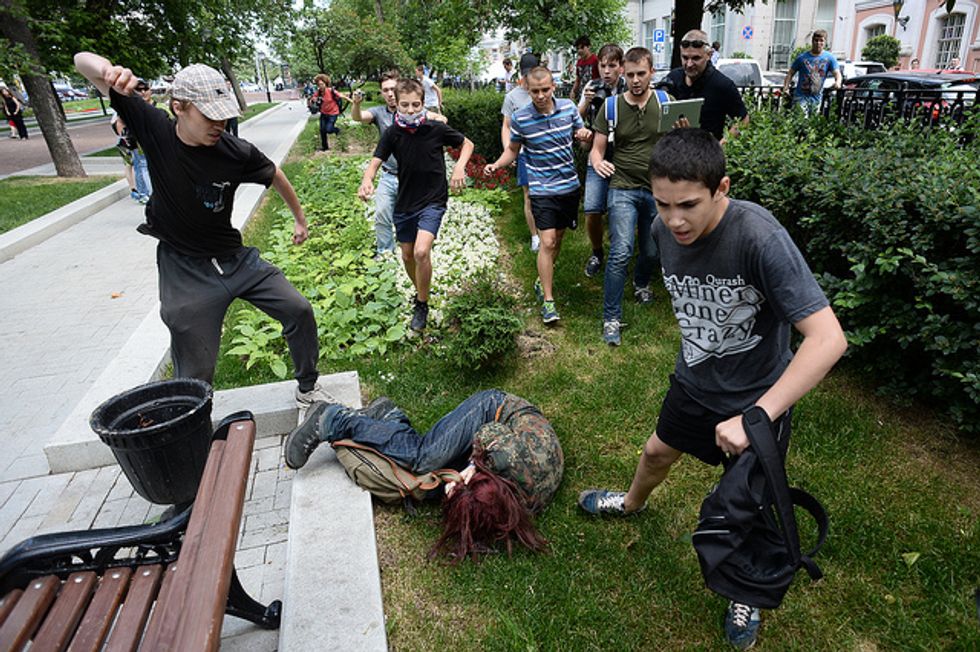 LGBTQ activists attacked during an action "Day of Kisses" against the Russian gay propaganda law. Photo by Roma Yandolin in Moscow, Russia.

Hundreds of gay men may have allegedly been rounded up, arrested, and systematically tortured by local police in Chechnya, a federal subject of Russia, according to reports.

The inciting incident leading to the arrests came from one small request from the local LGBTQ community: They simply wanted to have a parade.

"There has been a very strong outcry in recent days across the North Caucasus because a Russia LGBT group has applied for permission to hold a gay parade in the cities across the North Caucasus," Natalia Antelava, editor in chief of Coda Story, told PRI. "They were denied, of course, because gay parades are not allowed in Russia. But it seems to have resulted in this witch hunt on gay men."

An estimated 100 men have already been arrested, according to a story translated by the The Washington Post, with three allegedly dead. However, Chechnya’s leader, Ramzan Kadyrov, has categorically denied the report. In a statement to the Russian news agency Interfax, Alvi Karimov, a spokesperson for Kadyrov, called the report “absolute lies and disinformation.”

Kadyrov noted that law enforcement in the country is not concerned with the gay population as “their own relatives would have sent them to where they could never return.” The accusation of honor killings by family members of gay people in the region may have merit. As The Guardian reported, Chechen society, which is predominantly Muslim, is strictly conservative, and when a homosexual relative disappears, “those suspected are likely to be disowned by their own families. Locals say that if a family was known to have a gay member, other relatives would find it difficult to marry due to the ‘shame.’”

The story becomes even more perplexing after a spokesperson for the region’s interior ministry told the Russian newspaper RBC that the report of gay men being arrested was “an April fool’s joke.”

However, Ekaterina Sokirianskaia, Russia project director for the International Crisis Group, told The Guardian, “I have heard about it happening in Grozny (the Chechen capitol), outside Grozny, and among people of very different ages and professions.”

All of the information, Sokirianskaia said, was coming second or third hand, because admitting you’re a member of the LGBTQ community in Chechnya is extremely taboo. “It’s next to impossible to get information from the victims or their families, but the number of signals I’m receiving from different people makes it hard not to believe detentions and violence are indeed happening,” Sokirianskaia said.

While the reports of arrests, torture, murder, and honor killings have yet to be confirmed, what is verifiable is the frightening and hateful response by leaders of both Russia and Chechnya toward the LGBTQ community in general. As Karimov, the spokesperson for Kadyrov, said of the report, “You cannot arrest or repress people who just don’t exist in the republic.”

LGBTQ demonstration in St. Petersburg. Photo by By InkBoB.

Additionally, in 2013, Russia's parliament famously signed a federal law banning gay "propaganda." The law essentially made it illegal to distribute material on gay rights, created fines to be levied against people or organizations found guilty of breaking the law, established special fines for foreigners breaking the law, and made it illegal to equate straight and gay relationships.

[quote position="right" is_quote="true"]Any person who respects our traditions and culture will hunt down this kind of person without any help from authorities.[/quote]

The U.S. State Department issued a stern statement in response to a request from the Human Rights Campaign to assist in providing much-needed international pressure. The statement is aimed at both Russia and Chechnya on the alleged killings, saying it was aware of the troubling reports. The State Department’s statement read in part:

"We condemn violence against any individuals based on their sexual orientation or any other basis. We urge the Russian government to conduct an independent and credible investigation into the alleged killings and mass arrests, and hold the perpetrators responsible. We were likewise deeply disturbed by local authorities’ statements that apparently condone and even incite violence against LGBTI persons.”

However, those arrested will find little sympathy, even among local human rights leaders. Kheda Saratova, a member of the Human Rights Council in Chechnya, told CNN the article claiming gay men are being rounded up is "spitting into our face, our traditions, our customs." Saratova additionally told The Guardian, “In our Chechen society, any person who respects our traditions and culture will hunt down this kind of person without any help from authorities, and do everything to make sure that this kind of person does not exist in our society.”

Svetlana Zahariova, a Russian LGBTQ activist, told PRI her organization is actively working to set up a help hotline for LGBTQ people in Chechnya and is seeking answers to confirm the arrests and killings. Her group will also work to help any gay residents get out of the area.

"Right now we don't talk about concrete separate cases for security reasons, because we care about people who have managed to escape or can still escape," she said. "They are afraid they will be killed, or their friends are missing and they don't know where they are."