The Best Bet For Stopping Outbreaks Isn’t Just A Vaccine

“It seems like a foolproof way to eradicate a disease.”  #ProjectLiteracy 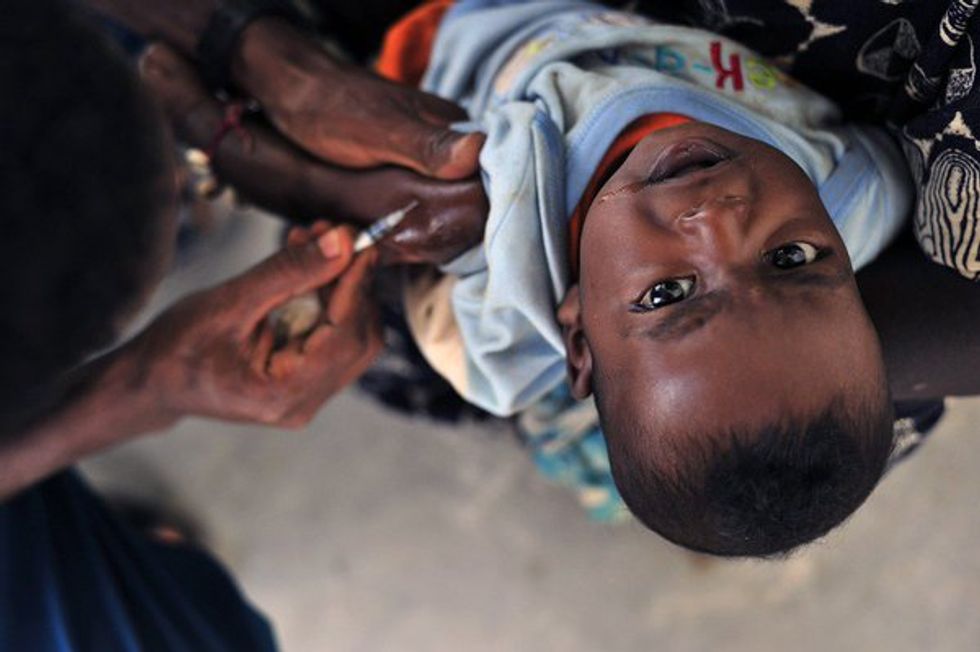 This story is part of an ongoing campaign called the Alphabet of Illiteracy. By using letters themselves—the foundation of reading and writing—Project Literacy examines the ways illiteracy underpins some of the greatest challenges facing the world today. Below, we explore the letter E for “Ebola” and other similar outbreaks of infectious disease.

In a series of events and missteps that are starkly reminiscent of the beginnings of the ebola virus outbreak in West Africa, Angola is now grappling with a worrying outbreak of yellow yever, the worst in three decades, which is spreading like wildfire throughout the region and has already claimed nearly 300 lives since December of last year, with another 2,900 people reportedly infected. Cases have already been reported in Kenya and even China, carried by Chinese nationals returning from Africa, and the World Health Organization (WHO) warns that the virus is likely to become a global pandemic if not slowed soon.

This has an odd ring of déjà vu to it… ebola, zika, now yellow fever? All diseases coming from Africa that have reached epidemic proportions in a dramatically short space of time. The difference is that unlike the other two, yellow fever is entirely preventable and has been for more than 80 years with a one-shot vaccine that lasts a lifetime.

Any international traveler visiting Central Africa knows that a basic requirement to get through customs is a yellow fever card, which shows you’ve received the vaccine. Officials are notoriously strict on this to prevent travelers from getting infected while in the region, but also to ensure they’re not bringing the disease in with you as an inadvertent carrier. It seems like a foolproof way to eradicate a disease that we’ve known about, and have been able to prevent, for almost a century.

So how is this outbreak happening again? Truth is, we may have dropped the ball on this one–not everyone living inside the region actually gets the vaccine, or even knows that they need to. Doctors of the World, one of the NGOs working on the ground in affected areas providing emergency medical care, advocacy and education to vulnerable communities, admits they’ve been struggling to get the message across about the absolute critical necessity for everyone to get vaccinated.

“Until a few weeks ago, even the local [health] ministry wouldn’t recognize the spread of the epidemic from the capital to other provinces,” says Silvia Perez, a health coordinator for the Médicos del Mundo team in Angola (MdM is part of the Doctors of the World network). “They only saw a few cases in other provinces… But now they’ve moved their strategies from the capital to other places, but it’s only been recently.”

The disease is now in 16 of Angola’s 18 provinces and spreading fast. Some of MdM’s health strategies there aren’t so surprising, such as a vaccination push—but education campaigns are proving to be equally important. MdM is teaching local communities about the disease, explaining both why it’s so dangerous and why getting vaccinated immediately is such an imperative.

In fact, the root of our current yellow fever problem may potentially be the low levels of literacy in this part of Africa—according to UNESCO, the adult literacy rate in Angola is only 71.14 percent—ravaged by decades of civil war, political instability, and a lack of access to consistent education and services. Few adults have anything beyond a grade school education there, and though that is changing with the younger generation (youth literacy rates are a bit higher, at 72.93 percent), that still leaves a large part of the population without the knowledge and literacy level that studies show could help them understand the spread of disease and how to protect themselves and their families from it.

Health illiteracy is itself a global problem, but in outbreak hotspots like Angola, it can be especially problematic. For example, the local government has attempted to tackle the yellow fever outbreak by distributing flyers in communities with information about the outbreak to encourage locals to get vaccinated. But of course, not everyone can read those flyers, and even if they can, most can’t understand the highly technical medical information they contain. There is also a smorgasbord of local languages and dialects spoken across the region, which means basic literacy taught to one group in one particular language can’t necessarily be easily passed along to others, especially the elders in their communities who make the decisions.

To bridge the gap, MdM has been taking some more novel approaches to promoting literacy and education, like using local theater, puppets, marionettes, and performance workshops to communicate important information.

Another organisation, Feed the Minds (FTM), took a similar approach to responding to the outbreak of Ebola in Sierra Leone, where the disease has now been eradicated but still has a tangible impact. FTM has been working with their partners Craftshare since 2002. During the outbreak Craftshare held workshops and drama sessions for trainees with low literacy levels, raising awareness of the disease and how to remain safe. FTM and Craftshare have helped rebuild communities by giving people valuable literacy skills, as well as trade skills like tailoring or carpentry.

That kind of training is particularly important for yellow fever, as well, because although it is endemic to the region, claiming the lives of around 60,000 people every year, locals often can’t tell it apart from the myriad of other diseases at play—malaria, chikungunya, dengue, zika. The symptoms of each are very similar at the onset. However, unlike zika and the others, yellow fever is a far more serious and formidable killer. The fatality rate for severe cases can be as high as 75 percent and symptoms can include bleeding from eyes, nose and mouth and the skin turning a yellow color (hence the name). But perhaps even more concerning is that most of those infected exhibit no symptoms at all and can carry the virus across the world without even knowing they’re sick.

“The main strategy is the vaccinations but for that we need time,” says Perez. “In the meantime, the people who are not vaccinated are carriers and they need to prevent the disease from spreading via personal protection like mosquito nets and using repellent, killing the mosquitoes in the house.”

There again are the reminders from the ebola outbreak and lessons not learned: Poor communication from these primary care facilities about what goes on behind closed doors, what the disease is, and why it is so dangerous is an important skill when it comes to getting people to volunteer for vaccinations. It’s equally important to explain what the vaccine does so locals understand what they are getting. Perez recalls some instances in which one community member or another thought a yellow fever vaccine might also work for malaria, which is not the case. In another instance, several locals were insistent that the vaccine would actually kill them, a plot by a government that didn’t want to pay for education—which is also not true.

Another big problem for health workers is the current critical shortage of vaccines. Amid talk of delivering lower doses so there’s more to go around, it becomes clear that there is a need for more resources. The first step for authorities and health workers will be to get communities on board with appropriate prevention strategies, even if they must wait for more vaccines.

Hundreds have already died as a result of this uncurable disease, which can cause renal failure, respiratory dysfunction, brain degeneration and death within a few hours. Please donate today so that Médicos del Mundo (Doctors of the World) can reach more people through education and outreach, saving lives before its too late.