College Freshman Fights to Give European Migrants a Great Education

Chrisann Jarrett won’t be happy until everyone who wants to be is in university. #globalgoals 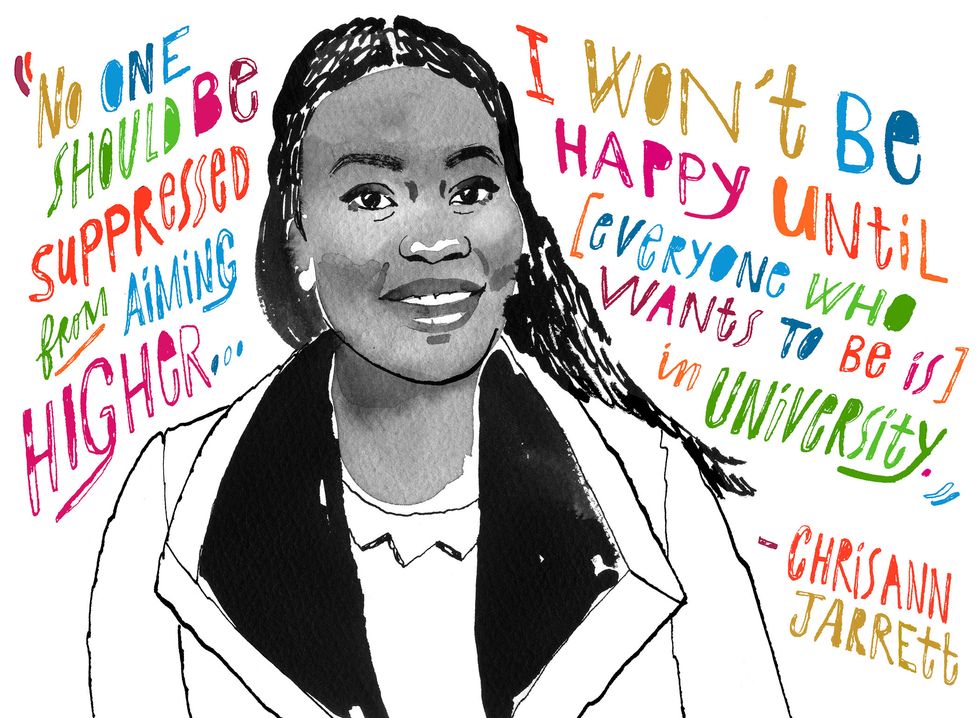 This fall, the United Nations is preparing to launch its 17 Sustainable Development Goals—an extraordinary action plan to solve the world’s biggest problems by 2030. Over the coming months, we’ll be connecting with The Local Globalists: 17 nonprofit founders, entrepreneurs, and social innovators who are working every day, wherever they are, to turn one of the U.N.’s #globalgoals into reality.

When most 18-year-olds get accepted into the university of their dreams, their main concerns are their social lives, changing living situations, and crafting the perfect course schedule.

That was not the case for Chrisann Jarrett, a Londoner who was accepted into the prestigious London School of Economics to study law in 2013. Jarrett is the daughter of Jamaican immigrants, and came to the U.K. when she was 8 years old. Though she didn’t have permanent status, she was a legal resident with what’s technically known as “limited leave to remain.”

However, because of her status, Jarrett was classified by her university’s student finance department as an international student, and thus not entitled to a student loan. In order to gain permanent status, Jarrett would have to embark on a 10-year “path to settlement” before she was entitled to funding. The moment when she realized she was unable to afford to attend her dream school was when she decided to take on the government’s immigration policy itself.

In lieu of her would-be freshman year, Jarrett found an internship at Just For Kids Law, a legal youth advocacy organization, which helped her launch the Let us Learn campaign, an effort to empower first-generation Britons who are unable to access university funding due to their immigration status. Like Jarrett, many of these students have lived in the U.K. their entire educational lives, attending primary and secondary school completely unaware of their status—either because their parents didn’t know due to misinformation or just hadn’t told them.

“I was not informed about my status as it’s not something an 8-year-old would ask about,” Jarrett said. “At the time I found out it was so confusing. No matter what anyone said I still saw myself as British.”

Jarrett, now 20, eventually found a scholarship that enabled her to attend LSE, where she’s currently a freshman. But in launching a campaign to help her peers through similar situations, she interjected herself squarely into the immigration debate in a country that has become increasingly hostile to foreign-born residents—and she managed to secure a major victory in the process.

“The issue was still relevant to me even though I sorted out my situation because I still have friends going through this,” Jarrett explained. “It’s still very fresh in my heart—I won’t be happy until all my friends who want to be are in university.”

Just for Kids estimates there are somewhere between 500 and 2,400 pupils a year in a similar state of limbo: Legally residing in the U.K. with little to no ties to their home country, but not yet permanent residents. In the midst of an explicit government policy to create a “hostile environment” for foreign-born residents residing in the U.K.—meaning more bureaucracy, paperwork, fees, inconvenience, and strife that are intended to eventually send frustrated migrants back to their home country—many feared that the nonsensical rule would stay in place simply to prove a point at the expense of a small, otherwise deserved group of students

However, in July, Britain’s Supreme Court ruled in case of Beaurish Tigere, a student originally from Zambia who found herself in a similar situation to Jarrett. Their ruling stated that it was unjustified to prevent legally-abiding students to access a student loan, a coup for Jarrett and her fellow campaigners, whose public awareness efforts were vindicated by the ruling.

“On the day of the judgment I felt nervous doing a small speech before entering the courtroom with the young people who were gathered outside.” Jarrett recalls. “But after we heard the good news, people were crying. That’s when I realized what we had done as young people: we created a movement that turned into a whirlwind.

Though their initial battle has been won, Jarrett and her fellow campaigners say there is still work to do when it comes to ensure that all Britons—regardless of where they were born—have access to education, especially in a political climate where attitudes towards migrants are fast-changing. She feels passionate that it makes no sense to curtail the dreams of some of the country’s most ambitious minds, just because they’re foreign-born.

“From this movement we would like to move forward by educating others on immigration changes and keep the emphasis on youth empowerment,” Jarrett said. “In terms of higher education I hope to work more on access as well as planting the seed that no one should be suppressed from aiming higher.”