Michelle Obama has the most relatable advice for Meghan Markle.

"Like me, Meghan probably never dreamt that she'd have a life like this, and the pressure you feel—from yourself and from others—can sometimes feel like a lot." 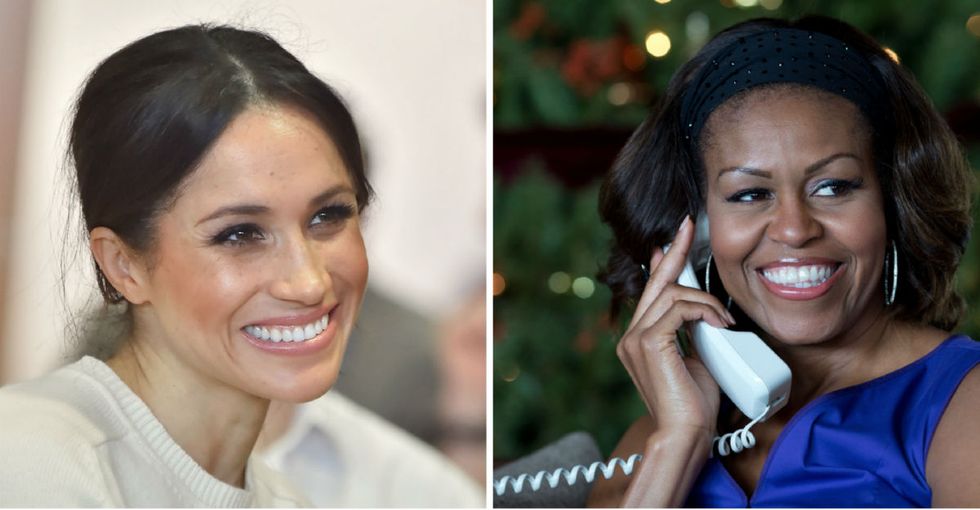 Michelle Obama might be fielding questions as to whether or not she’s running for president, but she’s not too busy to dole out advice to Meghan Markle. Obama, who is promoting her memoir, Becoming, had some words of wisdom for Markle in a recent interview with Good Housekeeping -- from one public figure to another. Yet, it’s relatable to the rest of us listening in.

As someone who’s familiar with being in the public eye on a global level, Obama said she could relate to the circus surrounding Markle, and advised that the newlywed Duchess of Sussex take some time to put on her own gas mask before launching into anything ambitious.

"Like me, Meghan probably never dreamt that she'd have a life like this, and the pressure you feel—from yourself and from others—can sometimes feel like a lot," said Obama.

"So my biggest piece of advice would be to take some time and don't be in a hurry to do anything. I spent the first few months in the White House mainly worrying about my daughters, making sure they were off to a good start at school and making new friends before I launched into any more ambitious work. I think it's okay—it's good, even—to do that,” she added.

Continued Obama, "I think Meghan can maximize her impact for others, as well her own happiness if she's doing something that resonates with her personally." Honestly, it might be good advice for even those of us who are non-Royals.

Obama expressed her concerns and her hopes for the next generation of women as well. "In many ways, things are harder for young women today. But what's inspiring to me is that so many of the young women I've met are triumphing in incredible ways. Unlike my generation, they're not as held back by the societal belief that girls and boys can't do the same thing," she said.

"They're charging forwards in sports and maths and science and technology. They're speaking up and speaking out, not just in classrooms but in the public arena at a young age. I find great hope in this generation of young women."

Whether or not Markle will take her fellow American’s advice has yet to be seen. However, Markle seems to be throwing herself into her new responsibilities right out of the gate. Since her marriage in May, Markle has been crossing the globe on royal tours, publishing a cookbook, and giving speeches – and to top it all off, she’s expecting her first child with Prince Harry next year.

Obama’s memoir Becoming details the former FLOTUS’s life both in and out of the white house. Obama has scheduled to promote Becoming with a European tour, however, her plans to visit Paris and Berlin have been canceled so she can attend the funeral of former President George H. W. Bush.