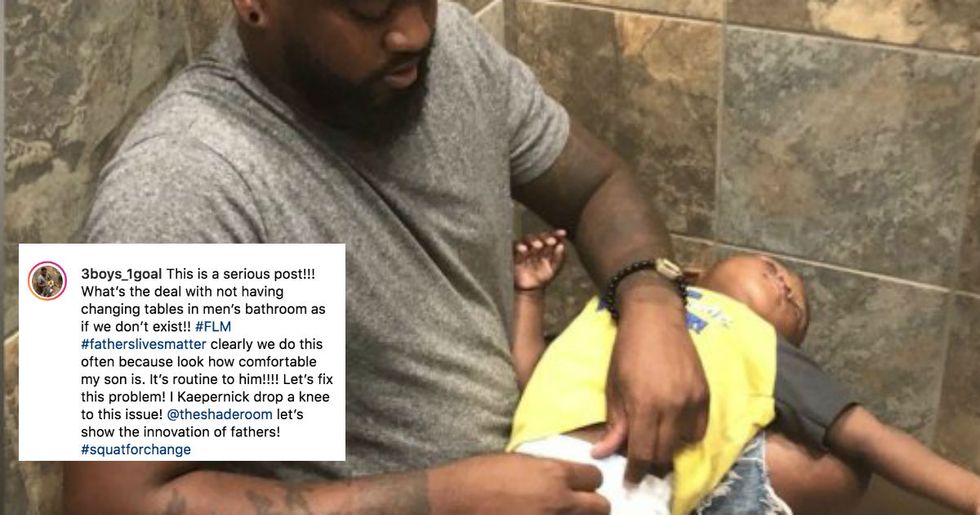 “This is a serious post!!! What's the deal with not having changing tables in men's bathroom as if we don't exist!!" Palmer wrote on his Instagram post, which received nearly 10,000 likes. “Clearly we do this often because look how comfortable my son is. It's routine to him!!!! Let's fix this problem! I Kaepernick drop a knee to this issue! Let's show the innovation of fathers!"

It's a challenge almost any father can relate to as a recent study found upwards of 90 percent of dads have gone into a men's public restroom trying to change their child's diaper only to find no changing station is available.

So, Pampers has decided to do something about it by committing to placing 5,000 new changing stations in men's public restrooms across the U.S. and Canada by 2021. And they've enlisted musician John Legend to help raise awareness for the campaign.

“I am so excited to play a role in Pampers' Love the Change campaign. I love being a hands-on dad, and it is so important that we acknowledge the active role dads are playing in their babies' lives," Legend said. “Spending time out and about with my kids is one of the greatest joys in my life, but it's frustrating when I am out with Miles and the men's restroom doesn't have a baby changing table. I'm proud to support Pampers as it paves the way for more inclusive parenting by providing all of us dads out there with the tools we need to succeed."

“Across the next two years, Pampers – in partnership with Koala Kare – will identify high-need public locations and provide baby changing tables for installation in the men's restrooms. Dads and babies visiting places such as parks and recreation centers, community centers and libraries in cities such as Cincinnati, Dallas, Philadelphia, Detroit, and many others across the U.S and Canada, are in line to benefit from Pampers' commitment. The first 500 locations have already been identified and installation is expected to be completed over the coming weeks."

A commitment to building the new changing stations is a potential game-changer for dads across North America. Not only will it measurably improve the lives of fathers, it helps to normalize a culture of men being fully involved in the care of their young children. And by targeting communities most in need, they are likely hitting the areas most in need of educational opportunities for fathers to learn more about the upside and necessities of co-parenting.

“We know that dads want to be able to bond with their children by taking them out and about, and that means the inevitable diaper-duty no matter where they are. In many instances today, instead of it being an easy, straightforward task it's a moment that causes angst because the facilities needed are not always available," said Andre Schulten, Vice President and General Manager Baby Care North America, Procter & Gamble.

Helping dads be the best they can be requires a variety of tools: educational awareness, positive encouragement and also real-world resources. Building 5,000 new changing stations can be the catalyst for developing a powerful foundation of positive masculinity that teaches fathers, and men in general, about the importance of parenting while also giving them an invaluable tool for putting those behaviors into practice.