175 Countries Sign On To The Record Shattering Paris Agreement 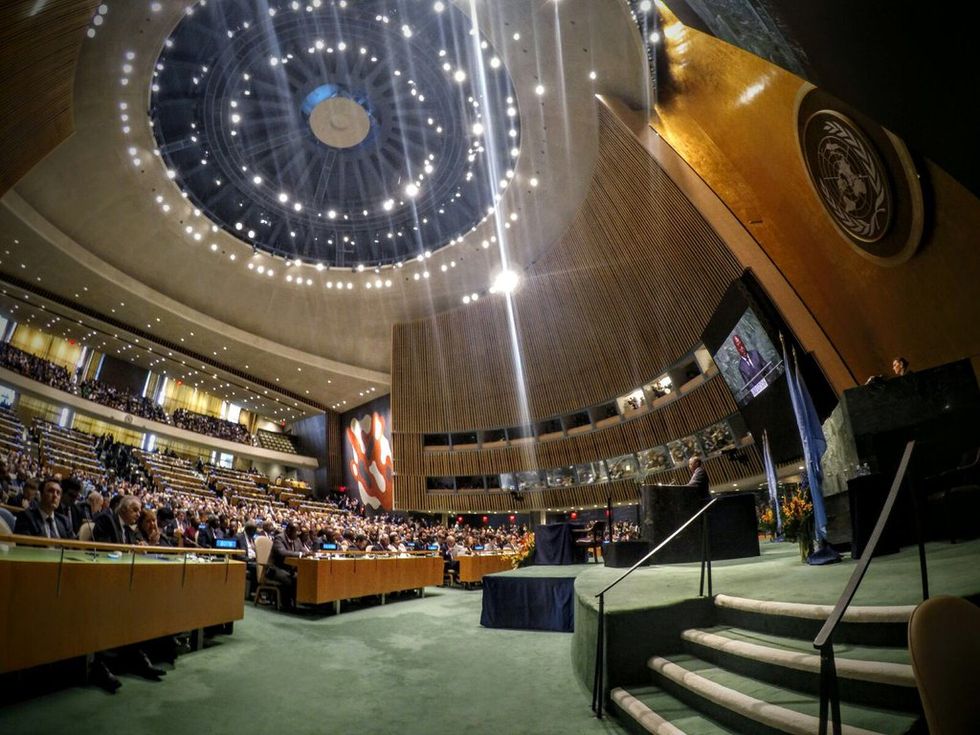 The 175 signatures scribed onto the Paris Agreement today shattered the record for the most nations ever to sign onto an international agreement in a single day. Before today’s ceremony at the United Nations headquarters in New York City, the record was 119 nations signing the Law of the Sea, a document establishing protocols for governing economic interests involving and management of the ocean’s natural resources. And that was all the way back in 1982.

“Congratulations one and all,” said Secretary-general Ban Ki-Moon on Friday morning. “The spirit of solidarity of Paris still lives.”

Technically, the negotiators had agreed to give countries a year to sign onto the Agreement, so to have 175 show up on the Day 1 is a stunning—and welcome—display of urgency by the signatories. And in the spirit of such urgency, fifteen countries not only signed the document, they also brought to the podium and delivered their “instruments of ratification,” which are required for the third and final step of the process to officially join the Agreement. (For a quick review of the difference between adopting, signing, and ratifying the Paris Agreement, see this earlier post, or this explainer from Carbon Brief.)

Tellingly, all fifteen that ratified are small, developing nations (almost all small island states) that are poised to suffer the worst impacts of climate change despite having contributed the least to greenhouse gas pollution. Analysis from Climate Interactive and MIT Sloan, (described here), shows with that every year countries wait to cut emissions it gets drastically more expensive and more difficult to meet the long-term goals of limiting the world to 1.5-2 degrees Celcius of warming. And as they stand right now, the national commitments towards this goal outlined in the Paris Agreement don’t come close to keeping the planet below that threshhold.

Originally, negotiators worked with the understanding that the Agreement would come into force in 2020, when the Kyoto Protocol officially expires. But the 2020 start date was pulled out of the final draft, as many of the world’s most vulnerable countries successfully plead that more immediate action was necessary. The sooner the Paris Agreement is brought into force, the sooner countries can work on making their commitments more ambitious within the United Nations Framework Convention on Climate Change (UNFCCC). Thus, actually giving the world a chance to limit warming below 2 degrees.

In response to the critical nature of the situation, a couple of crucial players said on Friday that they don’t plan to wait around. Zhang Gaoli, Vice Premier of China, announced before signing that the world’s most prolific emitter of greenhouse gases will finalize its domestic laws and officially join the agreement before the G20 Summit in Hangzhou this September. Zhang said that China, as the host of this year’s summit, will encourage other G20 members to join on the same timeline.

And as for the world’s second largest emitter of greenhouse gases—and largest per capita greenhouse gas polluter—Secretary of State John Kerry said emphatically that the United States would join the Agreement “this year,” and that the “U.S. is committed to bringing it into force in 2016.” Kerry, it’s worth noting, also delivered the most heartmelting moment of the ceremony, bringing his granddaughter to the podium when he signed the Agreement.

Accompanied by his granddaughter, Secretary @JohnKerry signs #ParisAgreement at @UN this morning#EarthDay https://t.co/7zj1vGADwU

A here are handful of loose notes from the historic day:

For future generations: Getrude Clement, a 16-year-old UNICEF climate advocate from Tanzania, opened the proceedings with some inspiring words. “I’m a young girl standing before you today, but I am not alone. We expect more than words on paper and promises. We expect action on a big scale, and we expect action today, not tomorrow.”

More cute overload: 197 children, one from each of the parties in the United Nations climate convention, lined the aisles amidst the world leaders as the Agreement was “officially” opened for signatures.

Faith leaders unite for climate action: Friday morning a group of prominent Muslim leaders presented the Islamic Climate Declaration to the United Nations, calling for nations to phase out the use of fossil fuels and shift to 100-percent renewable sources of energy. Earlier this week, 80 religious groups and 3,600 leaders of Jewish, Buddhist, Hindu, Christian and Muslim faiths—including the Dalai Lama, the head of the World Council of Churches and several Catholic cardinals—released the Interfaith Statement on Climate Change, which urges “all Heads of State to promptly sign and ratify the Paris Agreement.”

And this is a pretty big deal consdiering 17-percent of Americans and 35-percent of Catholics say that Pope Francis’s positions on climate change have effective their own perception of the issue.

Finally, a cost on carbon? French President Francois Hollande called for a global carbon pricing. "I commit on behalf of France, in the name of France, to ensure that the price on carbon shall be set in France… this will begin in France but must be spread to the rest of the world.” Most economists agree that carbon pricing would be the single most effective and expeditious way to transition to renewable energy sources.

An hour or so later, Lise Kingo, Executive Director of the UN Global Compact, which with more than 12,000 businesses in 170 countries is the world’s largest corporate sustainability initiative, put a number on the concept. “The Paris Agreement sends a clear signal that business and investors must put climate at the heart of decision-making. We believe that setting a $100 internal price on carbon is one of the most effective ways to drive climate deep into corporate strategy and investment.”

Not everyone thinks markets can save us: Evo Morales, President of Bolivia, used his time at the podium to crush capitalism. "The main enemy of life is consumerism, individualism, mercantilism, the race for armaments, greed and luxury,” Morales said. “The enemy of life, to sum up, is the capitalist system. Therefore it needs to be eradicated.”

Well done, now get to work: Peruvian President Ollanta Humala, one of the first to speak before the signings, may have best summed up the Paris Agreement and the challenges and work ahead. “This is not the end, this is the beginning.”