The Pope's Parting Gift To Trump Says It All

It came in a manila folder 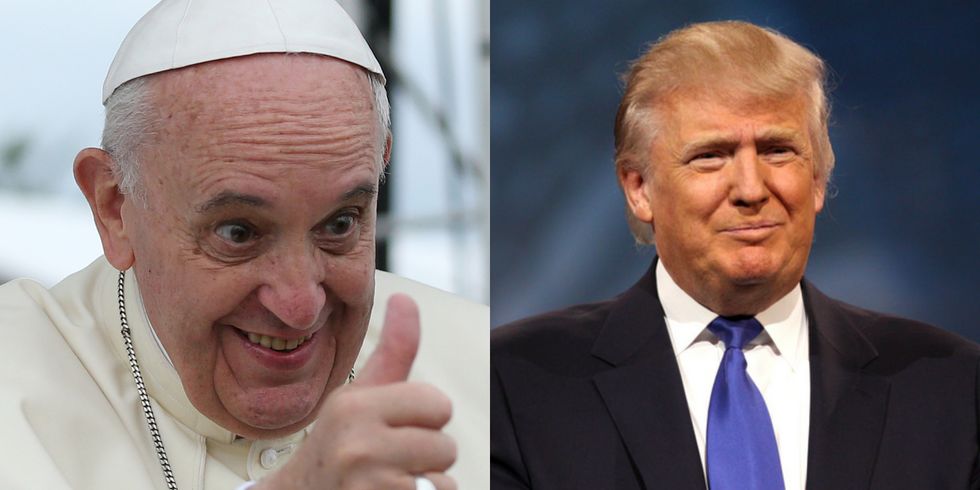 It’s long been a tradition for visiting political leaders and celebrities to exchange gifts with the Pope. Who could forget when Leonardo DiCaprio brought Pope Francis a coffee table book of paintings by Hieronymus Bosch? Really, DiCaprio just wanted an excuse to bring up Bosch’s freaky, apocalyptic painting, “The Garden of Earthly Delights,” for his documentary about our dying planet. He told the Pontiff in strained Italian, “The third panel we see a blackened sky that represents so much to me of what's going in in the environment.”

Well, it looks like Pope Francis has stolen a page right out of Leo’s playbook. On Wednesday, Donald Trump stopped by the Vatican to have a chat with the religious leader. About what, no one really knows, but one message seems abundantly clear: The Pope is a master troll.

According to CNN, Trump brought a first edition volume of work by Martin Luther King Jr. (Have you heard of him? He’s tremendous!) to the Vatican. In return, the Pope gave the president a printout of the 2015 paper he wrote on the damaging effects of climate change in an unceremonious manila folder that his staff probably found at the bottom of a filing cabinet in an abandoned JCPenney. (The Pope also gave Trump a large medal with an olive branch—the symbol of peace. We can’t say for sure, but one can only imagine at the Vatican, being gifted a medal with an olive branch representing peace is about as common as receiving a free tote bag after donating to NPR.)

The Pope not-so-subtly called Trump fat, as well, asking the first lady, “What do you give him to eat, potizza?” Apparently, potizza is a Slovenian pastry snack that makes people fat. Some heroes wear capes; others favor cassocks and skullcaps.

From Your Site Articles
Trending Topics
THE DAILY GOOD
Start your day with something GOOD.
Trending Stories
Culture