The move could be a major step for women’s rights, but some fear it’s too good to be true. 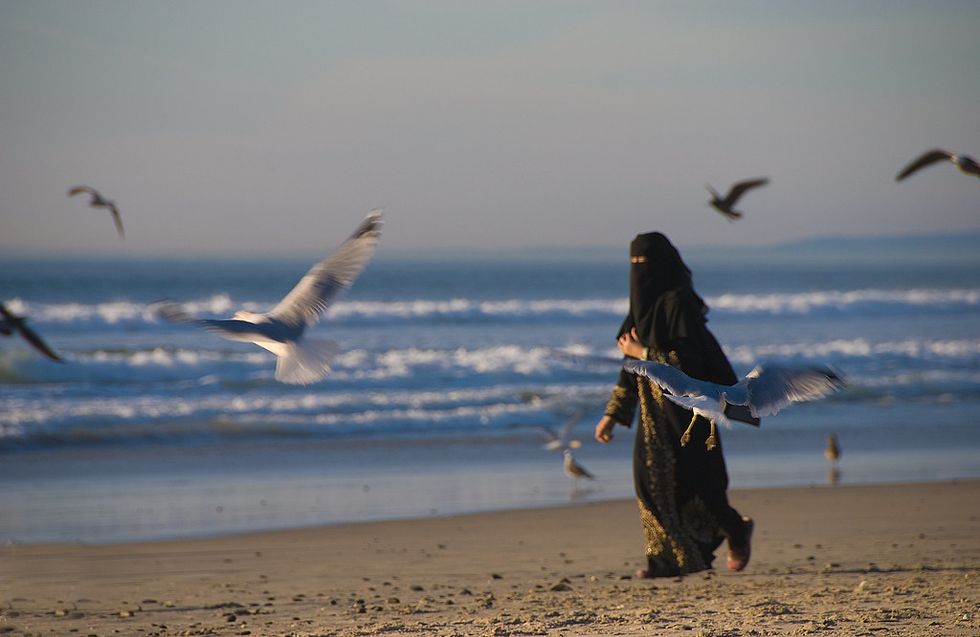 Saudi women could soon be allowed to travel the world freely.

The country maintains a male guardianship system that requires women of all ages to obtain the consent of a designated male guardian — typically a husband, father, brother, or even son — in order to make major decisions. There are currently a number of rules, some enforced by society and others by law, that restrict women’s freedom, making them seek a man's permission for actions such as leaving a domestic abuse shelter, opening a bank account, and getting married.

Currently, men under the age of 21 and women of any age are prohibited from international travel without proof of a male guardian’s consent. However, reports suggest that the Saudi government could amend the law within the year, keeping the requirement only for minors.

Human rights groups have pushed back against the country’s restrictive guardianship laws for years, arguing that they make women second-class citizens and deny them basic human and social rights.

“Why should any woman need guardianship over traveling, working, or getting married? Many women are being treated unfairly by their spouses, brothers, and fathers who take advantage of guardianship,” Farah, a 30-year-old woman from Jeddah, told the Wall Street Journal.

The country’s crown prince, Muhammad bin Salman, has recently assumed a greater role in governing the country and has brought about some women's rights reforms. Women were granted the right to drive for the first time last year. They had previously been banned, and most had to rely on a male family member or a chauffeur to get around. They are now also able to pursue higher education and employment opportunities of their own accord.

“There is no question that the leadership, the government and the people want to see this system changed. The current discussion is about how to make this happen as soon as possible without causing a stir,” a Saudi royal aware of the planned changes told the Wall Street Journal.

The reforms have been welcomed by many activists; however, the crown prince and the country stand accused of several other human rights violations, including violent suppression of political dissent.

Regarding the guardianship laws, the crown prince has previously said that it is the place of Islamic scholars to study and determine if they should be revised, rather than committing to creating change on this particular front himself.

However, the government created a committee to review and revise the guardianship laws earlier this year. The anticipated change to the travel law is due to the work of the committee, a senior government official told the Wall Street Journal.

There has been no official announcement from the government on the amending of the law yet, and most people who have spoken about the potential change have asked to remain anonymous, underscoring a widespread fear of backlash.

“We certainly hope it’s true. It’s odd that this news has not come from an official announcement, but it could be a sign that internally there is an effort to leak information like this to pressure [Saudi crown prince] Mohammed bin Salman into actually making this move,” Sarah Leah Whitson, executive director of Human Rights Watch’s Middle East and North Africa division, told the Guardian.

Saudi women have expressed mixed feelings, with some saying they are hopeful that the country will take steps towards becoming more progressive.

“It is absolutely crucial if we want to move forward as a country,” Huda, a 30-year-old from Jeddah told the Wall Street Journal.

Others remain skeptical about the government’s intentions.

“Is this a publicity stunt?” Ruba, a 29-year-old communications professional in the Eastern Province, asked. “I need to read the fine print. Where’s the catch, you know?”

And there is a catch: Even if this particular law is revised, numerous other guardianship laws will continue to regulate women’s choices and life decisions. One such law requiring women to seek a male guardian’s consent to obtain a passport will still remain an obstacle to their ability to freely travel overseas.

Even if the government chooses to modernize its laws in the coming years in favor of women’s rights, the country’s societal customs are still deeply entrenched, and attitudes may take much longer to evolve.

“I come from a family that is liberal within limits. But I have never and will never accept to be my own guardian,” one woman wrote on Twitter under the handle Mrs. Noora.

Even so, it remains undeniable for many women that more progressive laws will change their lives in various ways, opening them to new opportunities.