This is where he gets all the best news 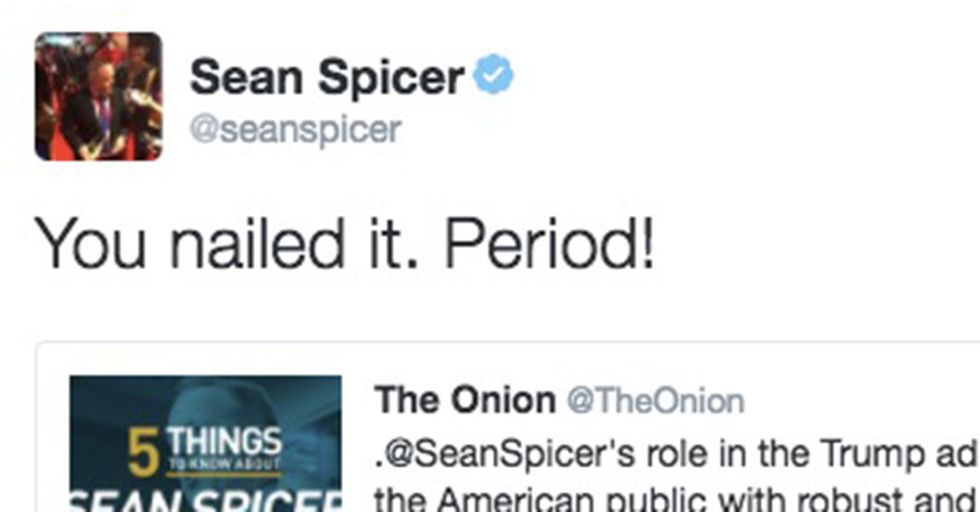 Sean Spicer might be the White House Press Secretary, but it seems he’s still having some trouble navigating the intricacies of the internet. A few days back, he tweeted out what appeared to be a password to...something, then followed it up by doing the exact same thing the next morning:

Now, he’s got some more egg on his face after sending a tweet claiming that a quick satirical profile piece from The Onion totally nailed what his daily job is:

Here’s The Onion’s tweet that “nailed it” by Spicer’s own admission.

.@SeanSpicer's role in the Trump administration will be to provide the American public with robust and clearly arti… https://t.co/S0lgWqg1ME
— The Onion (@The Onion)1485660545.0

While this is very likely a bullet point of most every press secretary in every administration, few tasked with the job would be so quick to explicitly state it. So, I suppose it’s possible that this was a sarcastic or tongue-in-cheek response, but that may be even worse, as a Press Secretary whose comments drip with sarcasm may be less desirable than one who simply doesn’t know what The Onion is.

In any event, it’s clear from his syntax, following up even the word “period” with an exclamation point, that President Donald Trump has managed to distribute his social media style guide to his team in his first week of office.