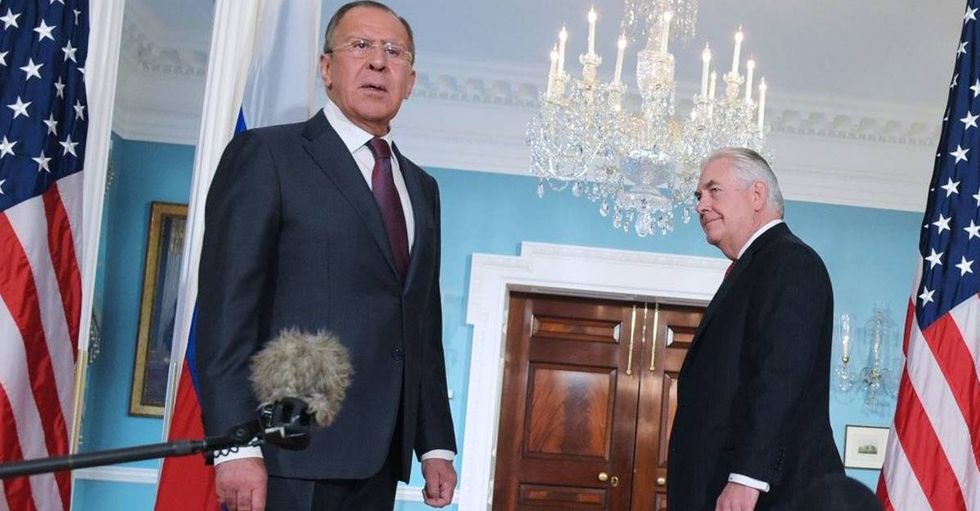 Optics be damned. The day after President Trump’s highly suspicious firing of FBI Director James Comey—the man investigating his shady ties to Russia—Trump met with Russian Foreign Minister Sergey Lavrov and Ambassador Sergey Kislyak, whose visit to the White House is questionable being that he was recorded by intelligence agents discussing repealing Russian sanctions with Michael Flynn last December. This encounter led to Flynn’s ousting as national security adviser.

Wednesday morning, Secretary of State Rex Tillerson, with Lavrov at his side, made a statement to the press in which the Russian foreign minister brazenly mocked reporters for asking about Comey’s firing.

SECRETARY TILLERSON: I want to welcome Foreign Minister Lavrov to the State Department and express my appreciation for him making the trip to Washington so that we can continue our dialogue and our exchange of views that began in Moscow with the dialogue he hosted on a very broad range of topics. Thank you.

QUESTION: Does the Comey firing cast a shadow of your talks, gentlemen?

FOREIGN MINISTER LAVROV: Was he fired?

Secretary of State Tillerson is very familiar with U.S.-Russian relations. Before becoming secretary of state, he was awarded the Russian Order of Friendship by Vladimir Putin for negotiating a deal between ExxonMobil-Rosneft and the Russian government.

Here’s a chummy photo of Tillerson being congratulated for his award by Vladimir Putin.

Nothing to see here, folks.