Choosing Hope Over Terror in Paris

Hours before the start of global climate talks, thousands form a human chain across the stricken city.

Told by French authorities they couldn’t march in Paris, climate activists and Parisians stepped up with creative, stirring demonstrations in the City of Light, and all around the world.

In Place de la Republique, where the massive march was supposed to launch today, on the eve of the COP 21 climate talks, activists placed roughly 20,000 pairs of shoes—a symbolic and poignant “silent march.”

“This is a way of symbolically and powerfully joining the climate march, and each pair of shoes shows the determination of Parisians to have their voices heard on climate change,” said Iain Keith of Avaaz, which helped plan the action.

U.N. Secretary General Ban Ki-moon dropped off a pair of his running shoes, saying, “As the world gathers in Paris to stand up for climate action, let us also stand in the shoes of all victims of terrorism, war, and persecution and respond with compassion.” Pope Francis sent along a pair of shoes to be placed on his behalf.

When clocks in Paris struck noon, thousands of Parisians and activists joined hands to form a human chain down Boulevard Voltaire, starting near Place de la Republique, passing the Bataclan Theater, where the most lives were taken during the tragic attacks of November 13, and down to Place de la Nation. At the Bataclan, participants left a 100-meter gap, to honor and respect the memorials that line the sidewalks. According to Agence France-Presse, nearly 10,000 people participated in the human chain.

“We joined hands today against climate change and violence,” said Hoda Baraka, global communications manager for 350.org. “People here in Paris, and hundreds of thousands who are taking part in climate marches worldwide, have a clear message for world leaders: Keep fossil fuels in the ground and finance a just transition to 100 percent renewable energy.”

“Today’s human chain sets the stage for the creative and powerful ways in which civil society will continue to mobilize throughout the coming weeks as the climate talks unfold in Paris,” said Nicolas Haeringer, a 350.org campaigner in France.

Some sensational headlines will be published and dramatic images will be shared about a clash between police and some protesters in Paris. And, unfortunately, most reports will fail to distinguish between the peaceful climate campaigners and the anticapitalist, anarchic Black Bloc groups that frequently crash peaceful protests and cause violent confrontations with police.

Hoda Baraka of 350.org described the other demonstration as “a small group of protesters unaffiliated with the climate movement” who “arrived at Republique and began to clash with the police there, violating the nonviolent pledge that every group involved in the climate coalition here in France has agreed to.”

Even French President Francois Hollande was quick to defend the peaceful climate demonstrators, calling the violence “scandalous,” and that it was caused by “disruptive elements” not connected to the environmental campaigners.

Overwhelmingly, the demonstrators were peaceful, linking arms, holding hands, and calling for peace and climate justice.

Around the world, hundreds of thousands of activists in dozens of cities marched for those in Paris who could not.

“It’s even more important for people everywhere to march on the weekend of November 29 on behalf of those who can’t,” said Emma Ruby-Sachs of Avaaz. We must “show that we are more determined than ever to meet the challenges facing humanity with hope, not fear.”

When all was said and done, more than half a million people marched in at least 175 countries around the world. All of this was organized, keep in mind, on incredibly short notice, as the planned Paris march was canceled less than two weeks ago.

In London, an estimated 50,000 showed up. There were an estimated 60,000 more in Melbourne. In Belfast and Berlin and Barcelona, climate activists took to the streets. Here in the United States, climate marches are underway in New York and Nashville, in Louisville and (later today) in Los Angeles.

In Bargny, Senegal, demonstrators flowed through the streets. As Sunday spun across the globe, marches also broke out in Australia, Asia, the Middle East, Europe, and Africa, and finally through North and South America. This slideshow from 350.org shows how far and wide the Global Climate March has spread—the diversity of demonstrators and variety of actions. 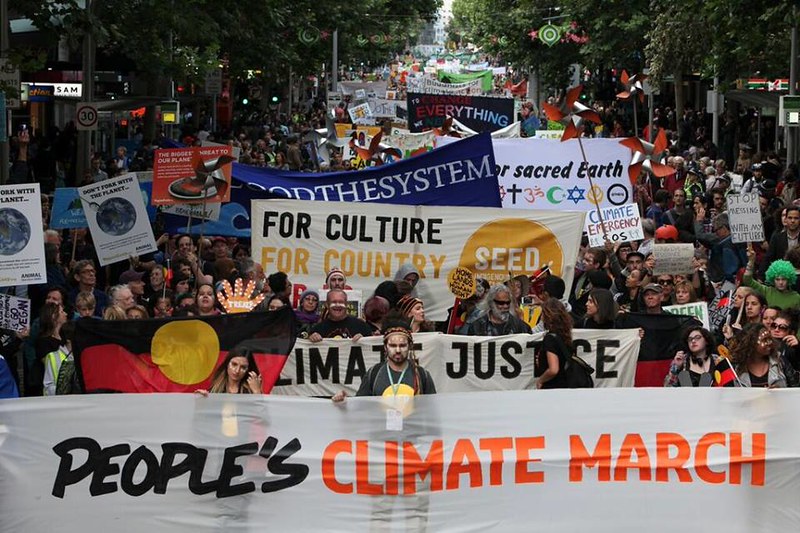 Tomorrow, the COP21 climate talks formally kick off in Paris. At least 147 heads of state—including U.S. President Barack Obama, China’s President Xi Jinpin, and Indian Prime Minister Narendra Modi—will be convening for a “leaders’ day.” Campaigners hope that these actions in Paris and worldwide will provide the talks with a much-needed emotional jolt, and show the leaders they have a public mandate to get a strong, ambitious deal done.