Sean Spicer’s Most Recent Press Briefing Meltdown Was Over The Definition Of A Fence Vs. A Wall

The question from an unlikely source: “Is Trump’s wall big enough to not be called a fence?” 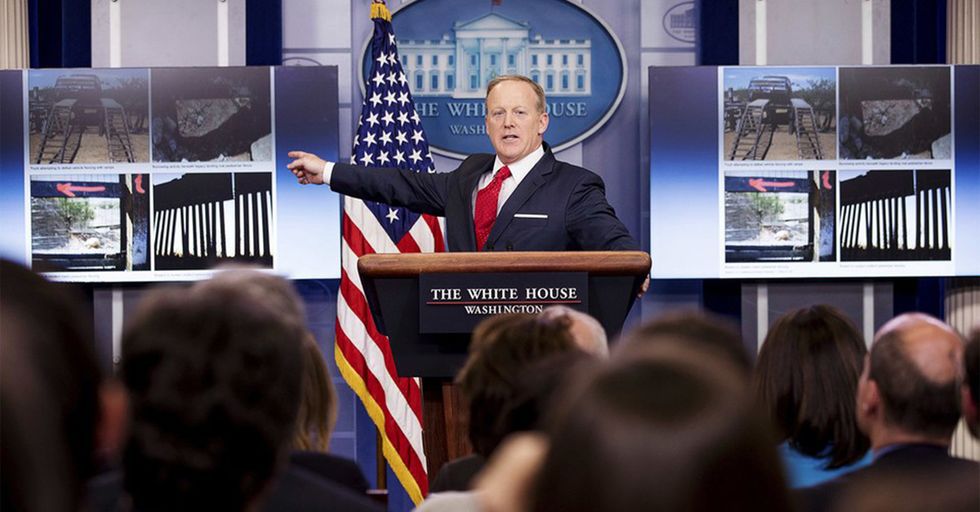 It’s understandable that Sean Spicer would have a short fuse in the instances he’s sent out to defend the indefensible for the Trump administration. When you’re looking at two inauguration crowd photos—one clearly more populated than the other—your only real defense is throwing a temper tantrum, lest those pesky “facts” get in the way.

But yesterday, it was a less objective (but equally absurd) matter that got Spicer all fired up. On the topic of Trump’s proposed border wall, a Breitbart reporter, Charlie Spiering, was curious if the diminutive size of Trump’s wall would really make it more of a fence.

After an initial question about the administration's current focus on the wall, Spicer, in an odd moment of prior preparation, produced a PowerPoint slide show which highlighted the wall in its current state. There were holes cut in parts and tunnels dug under others.

Spiering then pivoted his line of questioning, “Just one question about the photos,” the Breitbart reporter said, “are those photos of fences or walls?”

He lost his cool yelling, “Bollard wall! Levy wall!” One could only imagine the hellfire that would rain down upon the Trump cabinet member who dared demote the president’s cherished wall to a mere fence.

If you’re interested in seeing the exchange, it’s all in the video below, as is a conversation about the characteristics of fences and walls by two men who clearly knowing nothing about the subject.

The difference, based on these definitions, is that walls appear to be considered masonry structures as opposed to fences, which are usually made of posts and wire or boards. The word ‘structure’ is used in definition of a ‘wall’ but not for ‘fence.’ Thus, a wall can likely be differentiated from a fence in the materials used to construct it. Of course, it could be problematic that the definition of ‘wall’ refers to a masonry fence.

So … I don’t know. And considering the fence/wall/ledge/rail hasn’t been at all designed by structural engineers or designers, there is no answer because the concept of a wall remains painfully (but mercifully) abstract.

One benefit of these regular Sean Spicer meltdowns is that we clearly see the absurd pain points of the Trump administration. Sure, they get upset if you say the wall’s a bad idea, but they get REALLY upset when you call the wall a fence.

As such, we demand Donald Trump abandon his plans to build a fence along the U.S.-Mexico border.