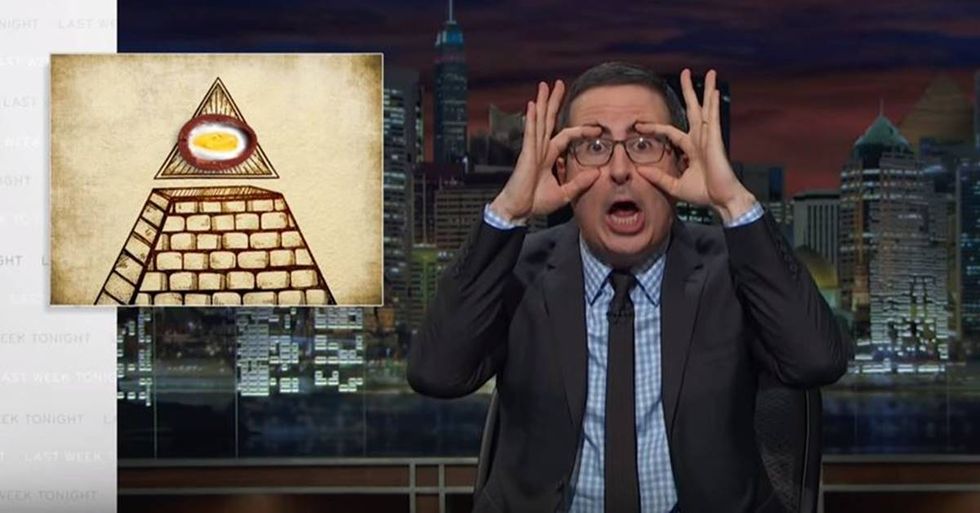 With a quick YouTube search, you could probably find a conspiracy theory video on just about anything from chemtrails to the Denver International Airport. So John Oliver, host of HBO’s Last Week Tonight, decided he would throw his hat in the ring by explaining a sinister phenomenon that happens every Easter: Cadbury Creme Eggs. Why? “The Cadbury Creme Egg is a terrible candy that tastes like mermaid placenta covered in candle wax,” Oliver says. “And yet, every year these eggs show up in January like newly signed gym memberships.” There has to be a conspiracy, right?

Oliver spends the rest of his time mocking the paranoid conspiracy crowd by making unbelievable leaps of logic that eventually connect the Cadbury Creme Egg to the Illuminati. “I have no idea if any of that is true. In fact, I’m sure most of it it’s completely false,” Oliver says. “But it felt amazing to say, and it almost made sense. And that is what YouTube conspiracy videos are all about.” Oliver may have had the first laugh, but right now, someone in a basement somewhere is making a video that accuses Oliver of working for the Illuminati.