The Swansea Bay Tidal Lagoon is working to change the way the United Kingdom sees its coastline. 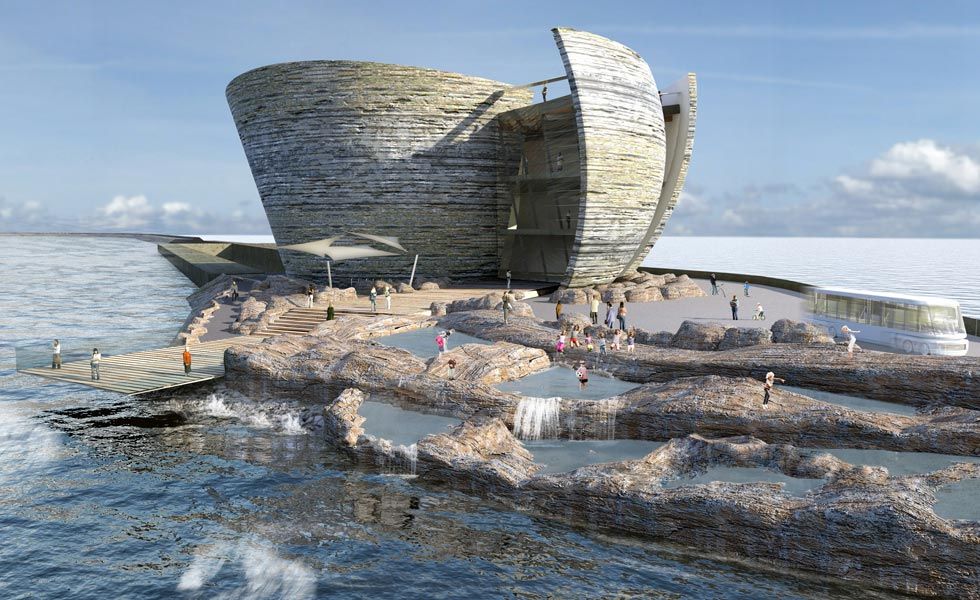 Construction has yet to begin on the Swansea Bay Tidal Lagoon Project, but when ground is broken a few years from now, the whole of the United Kingdom—and much of the rest of the world—will be watching as the Welsh city of Swansea transforms into one of the most important green energy hubs on Earth. There, a massive, man-made lagoon is expected to generate electricity for more than 150,000 neighboring homes for the next century to come, all by harnessing the ebb and flow of the coastal city’s ocean tide. What’s more, this landmark water power system will not only create clean energy—expected to be entirely carbon neutral within four years of service— but will serve as a stunning monument to forward-looking architectural design that keeps people in mind, even while serving a decidedly industrial purpose.

The project, which cleared its last bureaucratic hurdle in July 2015, is reported to be the first man made lagoon to be used to generate power on this scale, although tidal power plants have been in use since the 1960s. To create the expected 495 gigawatt hours annually, the nearly six mile long constructed wall enclosing the artificial lagoon will be outfitted with sixteen massive turbines, each of which will churn four times daily, as the tide moves in and out. This video, created for the projec in 2013, goes through the process:

As CityLab explains, the fact that this power-generating lagoon is man-made means that its shape and placement can be customized to maximize the bay’s existing tidal features, thereby generating as much power as possible out of the water’s controlled movement, while simultaneously minimizing (in theory) any adverse impact on the bay’s natural life.

But, as much as the project may be huge technical achievement, it is shaping up to be an architectural marvel as well. The lagoon wall itself is intended to serve as a path for both foot and bike traffic, with sculpture installations fabricated into the rampart that will surface and submerge with the movement of the tide. The jewel in the tidal lagoon wall’s crown, however, is likely to be the offshore visitors’ center. Designed by Juice Architects, the center is intended to sit some 3.5 kilometers out in the bay, and, is inspired by the oysters which, explains Juice, represent “a key part of Swansea Bay’s history.” Concept designs of the building show a structure resembling a ring of layered shells rising up from the rocks, as if a natural outcropping of the bay’s organic features.

Construction on the project, with an estimated price tag of $1.5 billion, isn’t set to begun until at least the autumn of 2016. But, explains the Tidal Lagoon website, there are external factors at play here as well: The U.K. has pledged to transition to at least 15 percent renewable energy by the year 2020. Currently, they’re only a third of the way there, with 5 percent of the country’s power renewably sourced. With that in mind, the completion of such a prestige project would not only help the country meet its stated goal, but would usher in a new era of eco-minded design, and inspire other communities in search of new sources of green energy to cast their eyes, and their turbines, out to sea.