The NRA doesn’t have to worry about Trump blaming them. 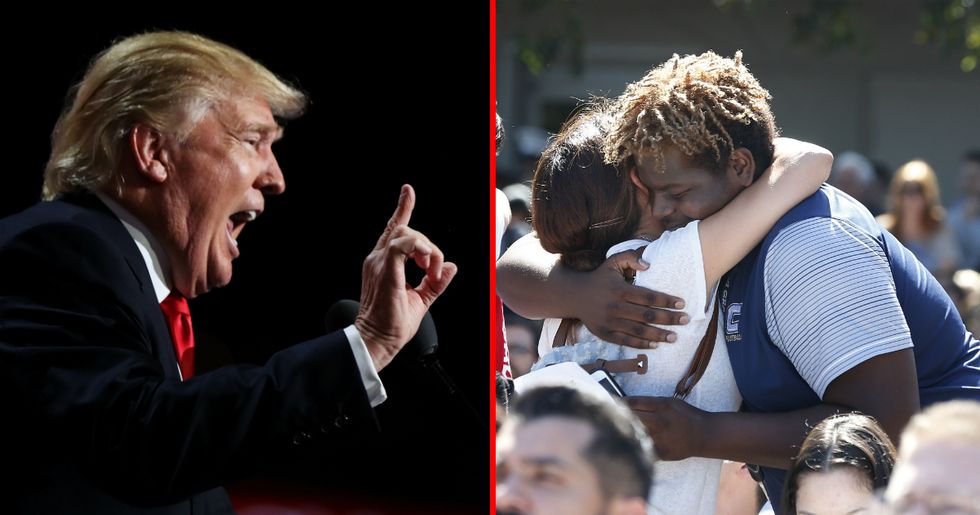 Image via The White House/Wikimedia Commons.

President Donald Trump has a long history of victim-blaming.

He told the widow of a Green Beret killed in Niger last year that her husband, “Knew what he was getting into.”

Trump saw the counter protesters during the bloody “Unite the Right” rally in Charlottesville, Virginia, as equally responsible as the white supremacists. “I think there is blame on both sides,” he said.

When Puerto Rico was devastated by hurricanes, he took to Twitter to criticize the country. “Texas & Florida are doing great but Puerto Rico, which was already suffering from broken infrastructure & massive debt, is in deep trouble,” he tweeted.

On Feb. 15, after the horrific school shooting in Parkland, Florida, that has taken the lives of 17 people, Trump appears to be blaming the students at Marjory Stoneman Douglas High School.

So many signs that the Florida shooter was mentally disturbed, even expelled from school for bad and erratic behavior. Neighbors and classmates knew he was a big problem. Must always report such instances to authorities, again and again!

Trump’s tweet makes it look as though the school and surrounding community are partially to blame for the atrocity. “Neighbors and classmates knew he was a big problem. Must always report such instances to authorities, again and again!” he tweeted.

But the alleged shooter, Nikolas Cruz, was expelled from Douglas High School after allegedly being caught bringing knives and ammunition to class. After he was expelled, school authorities went a step further by banning Cruz from ever entering the school campus with a bag.

Cruz was also reported to the FBI after leaving a disturbing comment on a YouTube video. “I’m going to be a professional school shooter,” he allegedly wrote.

In an address on Feb. 15, Trump brought up the need to “tackle the difficult issue of mental health.” But not only is the correlation between mental health and mass shootings tenuous at best, his administration has repeatedly tried to gut Americans’ access to mental health care.

All the while, Trump has no intention of mentioning the tool that was used to commit the heinous crime: a highly-customizable AR-15 semi-automatic rifle which was obtained through legal means.

Could it be that it’s because the NRA gave him over $30 million isn support during the 2016 election?