He gave a National Day of Prayer address hours after he admitted he paid hush money to an adult film star. 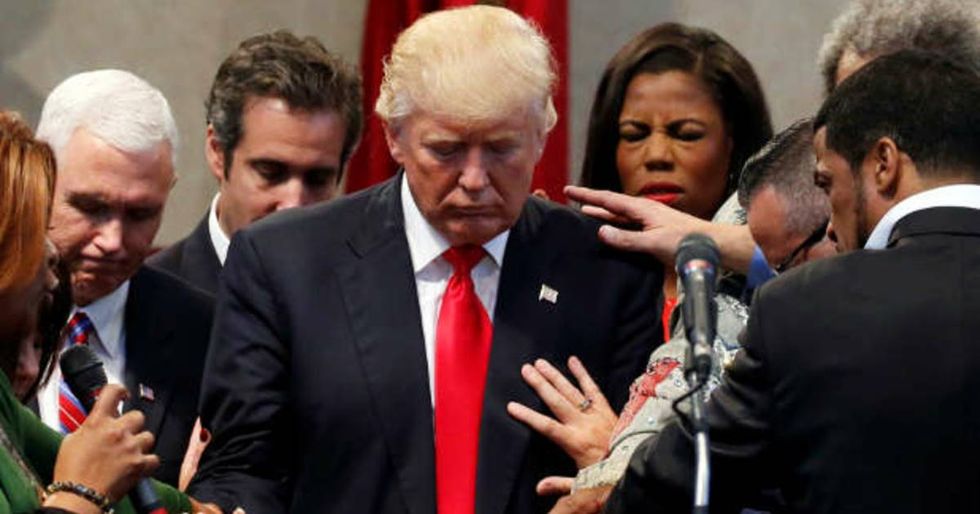 Despite his many alleged moral and ethical transgressions, many of America’s most faithful have no trouble believing that Donald Trump is a man of God.

More than 4 in 5 white Evangelical Christians voted for Trump in the 2016 election, and he currently holds a 75% approval rating with the group, even though Trump’s adulterous behavior and disrespect toward women have been well-documented.

Nowhere was this paradox more apparent than in the White House Rose Garden on May 3. After tweeting that he had reimbursed his lawyer, Michael Cohen, $130,000 for paying hush money to adult film star Stormy Daniels, Trump gave a National Day of Prayer address.

President Trump pays tribute to the late Rev. Billy Graham at National Day of Prayer event in the Rose Garden: “Rev. Graham’s words remind us that prayer has always been at the center of American life because America is a nation of believers.” https://t.co/hmQXQoOKQm pic.twitter.com/FuWXBv7APs

“Prayer has always been at the center of the American life. America is a nation of believers, and together we are strengthened by the power of prayer,” Trump said, with a straight face. He then signed a new executive order giving greater freedom to faith-based community organizations.

Trump’s call for religious freedom doesn’t seem to apply to Muslims, a population that was restricted from traveling to the U.S. On April 30, Trump refused to apologize for his so-called Muslim ban; but at the Day of Prayer just four days later, he proclaimed the power of faith.

After the event, a journalist yelled a question about the payment to Daniels and several attendees shouted “Shame on you!” to the reporter.

To commemorate the day, the Republican Party tweeted a photo of a solemn, revenant God-fearing Trump.

RT to thank @realDonaldTrump for his commitment to religious freedom. #NationalPrayerBreakfast pic.twitter.com/fK1Wn12ZjU

Slightly awkward moment in the Rose Garden as National Day of Prayer reception guests await the president. All quiet except for the sound a CNN reporter doing piece to camera about Stormy Daniels. Some giggles some questioning glances. pic.twitter.com/OKHlXQsKw9

Yes! For the "Christians" a Trump sermon full of his good words & spirit. Amen!

It's been an exciting National Day of Prayer!