Confederate Statues Aren’t The Only Monuments At Risk Right Now

In the fight to protect public lands, billions of dollars hang in the balance. 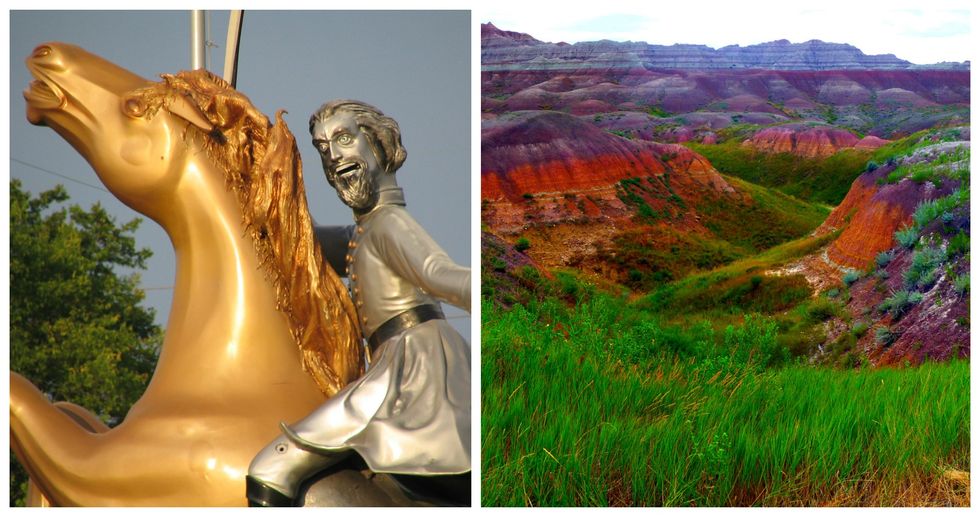 As the debate rages on over whether to remove or keep Confederate statues, the Trump administration is stealthily targeting monuments of a different sort: the public lands and parks that prevent America from becoming one giant parking lot.

The precarious fate of national monuments isn’t exactly news. Since Trump took office, selling millions of acres of public land has been on the agenda, much to the dismay of environmentalists, taxpayers, and lawmakers alike. Not much has been officially decided as of yet, but this week, we can expect recommendations from the Secretary of the Interior Ryan Zinke on whether or not to preserve public lands. In advance of his recommendation, Joint Economic Committee Democrats shared information about the economic benefits we currently enjoy and stand to gain thanks to the recently designated national monuments Trump hopes to jeopardize.

Sad to see the history and culture of our great country being ripped apart with the removal of our beautiful statues and monuments. You.....
— Donald J. Trump (@Donald J. Trump)1502975248.0

It’s not as if Trump wants to abandon protections for all monuments. He apparently sees immense value in the Confederate statues that have ignited violence and hatred over the decades. Just days after violence erupted at the hands of neo-Nazis in Charlottesville, Virginia, Trump tweeted about the “beauty” of these symbols of slavery. But we all know it’s not really about relative attractiveness. If so, the Atlantic does an expert job of showing how Confederate statues pale in comparison to national parks in purely aesthetic terms.

So, let’s not look at it that way. Let’s say you couldn’t care less about the irreplaceableness of our public lands or the joy millions of Americans derive from them. Let’s suppose you see no harm in defending statues erected as late as the 1970s in thinly veiled acts of racist intimidation. From a purely economic standpoint, there’s no comparison between the two. Nevada, for instance, creates $12.6 billion in consumer spending each year thanks to its protected natural landscapes. Outdoor recreation creates $12.6 billion in Utah, $21.2 billion in Arizona, and $92 billion in California.

These types of national monuments directly support millions of jobs across the country and generate billions of dollars in tax revenue. Last I heard, there isn’t a billion-dollar industry centered around Confederate statue tourism. To urge the U.S. Department of the Interior officials to protect our national monuments, you can email them at feedback@ios.doi.gov, give them a call at 202-208-3100, or send a letter to Department of the Interior, 1849 C Street, N.W., Washington, DC, 20240.