Thursday’s announcement was nothing more than political melodrama 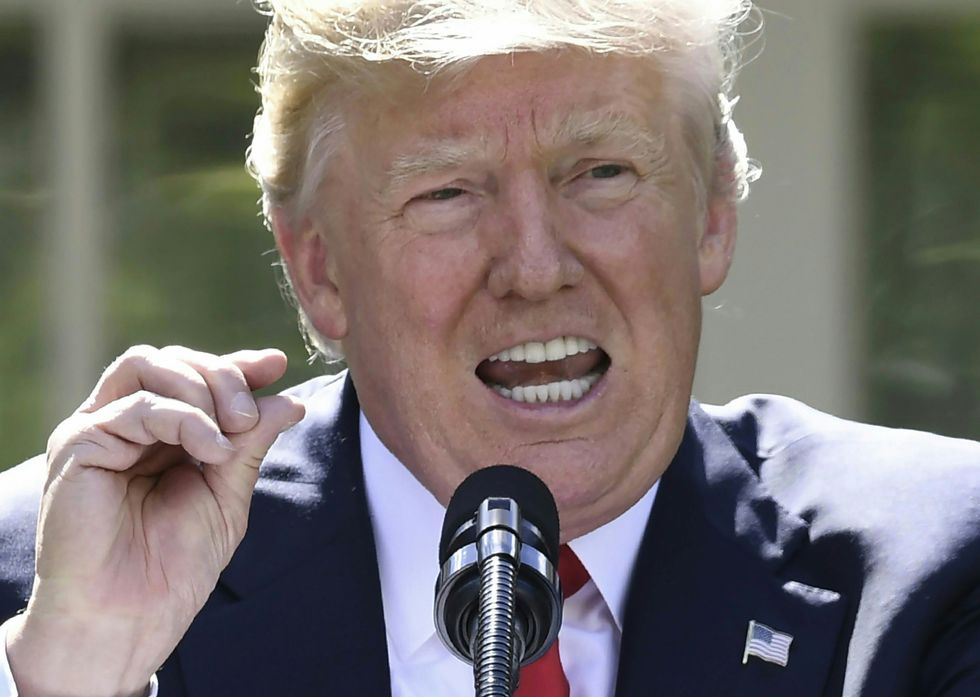 Sure, Trump announced, with a dramatic pause, that “Therefore, in order to fulfill my solemn duty to protect America and its citizens, the United States will withdraw from the Paris Climate accord.” It’s unclear whether the president understands that, despite his proclamation, the United States will still be a party to the Agreement. On a call with reporters, Christiana Figueres, former head of the United Nations Framework Convention on Climate Change (UNFCCC) and one of the main architects of the Paris Agreement, made it clear that “the White House has no understanding of how an international treaty works.” Trump suggested many times that the United States was “getting out,” but would start renegotiating to “get a deal that’s fair.”

[quote position="left" is_quote="true"]Trump has turned the next election into a referendum on climate change.[/quote]

“The fact is that there is no such thing as today withdrawing and then renegotiating,” said Figueres. France, Germany, and Italy released a joint statement almost immediately echoing this point: “We firmly believe that the Paris Agreement cannot be renegotiated.”

In fact, the earliest the United States can legally submit its “intent to withdraw” would be on November 5, 2019, and the soonest the United States can withdraw would one be year after that. (“Not a day before then,” said Figueres.) Trump’s call for withdrawal was nothing more than “vacuous political melodrama,” as Figueres put it. “There is no legal basis to what we heard today [from President Trump]. It is fundamentally a political message, period.”

Let’s not pretend, though, that Trump’s announcement doesn’t have carry any significance. When the president of the world’s largest historical emitter of greenhouse gases and world’s largest economy announces that it is retreating from global cooperation on the gravest global threat, the political implications are very real. So it’s a sad turn for America, but not for the most obvious reasons. Practically speaking, America’s share of heat-trapping emissions aren’t likely to be much affected by this alleged “withdrawal.” The country’s pledges to the Paris Agreement, like everyone else’s, are voluntary, and we’ve known since election night that President Trump was going to do all he could to throw a lifeline to the failing coal industry and do everything in his power to drill as much oil and gas as possible. His hopes to dismantle the Clean Power Plan are well documented, and Environmental Protection Agency head Scott Pruitt has been working hard at this for months now already.

Rather, it’s a sad day for America because of what Trump’s uninformed, ignorant announcement signals for America’s priorities in a global civilization and for our country’s standing in the world. It would be hard to put it better than Bill McKibben did in a New York Times op-ed Thursday afternoon.

As for America’s standing in the world, the diplomatic and economic impacts of Trump’s climate snub will be severe. International forums like the G7, the G20, and NATO all provide vital services to the United States, from trade agreements to intelligence sharing to international security efforts, and all of these alliances take climate change very seriously. Unlike the United States, which is pretty unique globally to have fostered a deep controversy about the realities of climate science—ginned up by the cable news favored by our dealbreaker in chief—even conservative leaders of our most important allies consider climate change a real and present danger.

Now, Trump is making a public display of breaking America’s promise on climate. “The blow to the international credibility of the United States, can really not be underestimated,” said Figueres ,“when you have a head of state that stands up in front of the cameras of the world and makes statements that are factually so incorrect.”

R. Nicholas Burns, a former under secretary of state in the administration of George W. Bush, was even more direct, saying recently of leaving the Agreement, “I can’t think of anything more destructive to our credibility.”

Today's decision is a setback for the environment and for the U.S.'s leadership position in the world. #ParisAgreement
— Lloyd Blankfein (@Lloyd Blankfein)1496352043.0

Already, foreign leaders are condemning Trump’s announcement, and stepping up to replace the United States as global leaders on climate. On Friday morning, China’s premier joined the presidents of the European Council and European Commission to release a joint statement, reaffirming their commitment to the Paris accord and to “significantly intensify their political, technical, economic and scientific cooperation on climate change and clean energy.” This cooperation between the EU and China foretells a new world order when it comes to climate diplomacy and global decarbonization efforts, not to mention the race to reap the benefits of a burgeoning clean energy economy.

Newly elected French President Emmanuel Macron already invited American scientists, engineers, and entrepreneurs who are disappointed or displaced by Trump’s policies to come to France, where they would find good, meaningful work on “concrete solutions to climate change.”

Statement on the US' withdrawal from the Paris climate agreements. #parisagreement https://t.co/T4XOjWZW0Q
— Emmanuel Macron (@Emmanuel Macron)1496353616.0

Trump seems to believe that leaving the Paris Agreement will save American jobs, but most evidence and economic analyses says the opposite. Also on the press call, California Governor Jerry Brown said that “California’s economy and America’s economy is boosted by the Paris Agreement.” Brown boasted that because of (not despite) having some of the country’s most stringent climate programs, “the California economy last year increased 40 percent faster than the rest of the country, following policies even tougher than what Paris is calling for.”

[quote position="full" is_quote="true"]Thankfully, most of the decisions that really matter happen at different levels of government.[/quote]

Brown’s account is encouraging, but the potential tragedy of Trump’s announcement is that it will discourage other states from following California’s lead, as state governments without strong leadership can be beholden to powerful fossil fuel companies they host. Renewable energy and climate solution technologies are projected to create $19 trillion in wealth by midcentury, and those are spoils that Trump risks forfeiting for Americans.

There’s a reason that major investors and Fortune 500 CEOs were all aggressively lobbying the White House over the past few months to stay committed to the deal, and to clean energy fortunes.

Wall Street Journal: US CEOs letter to Trump arguing for US to remain in the Paris #Climate Agreement https://t.co/xFg1J4RdxD
— Craig Jones (@Craig Jones)1494444049.0

“The historic Paris Agreement was achieved, thanks in large part to U.S. climate diplomacy, but it will succeed with or without the U.S., as the rest of the world remain committed to the low-carbon transition. The 20th century was powered by fossil fuels and America dominated the world. The 21st century will be powered by clean energy, and Trump’s decision to withdraw from the Paris Agreement could mark the end of American supremacy.”

We can still stop climate change.

One nice thing about the U.S. Constitution, especially when you’ve got a climate denier in chief in the White House, is that it leaves a lot up to the states. “Thankfully, most of the decisions that really matter happen at different levels of government,” said Andrew Steer, president and CEO of the World Resources Institute.

Less than an hour after Trump’s announcement, the governors of Washington, New York, and California announced that they were starting up an alliance of states who remain committed to delivering on the U.S.’s emissions reductions pledges to the Paris Agreement. “This is an insane move by this president,” said Governor Brown of California, calling it “deviant behavior from the highest office in the land.”

Later in the day, a separate group of mayors, governors, businesses, and institutions, shepherded by former New York City Mayor Michael Bloomberg, announced that they were negotiating with the UNFCCC to formally join as a party to the Agreement to spite Trump. Though it’s unlikely that they will be allowed to formally join—the UNFCCC only allows nations as parties—it raises the prospect of the United States, through subnational actions, actually meeting the Paris Agreement targets without any support or approval from the White House at all. And because the United States will still technically be a party to the Agreement until at least November 2020, these states and cities have the opportunity to prove how painless it could be to achieve our Paris promises.

Finally, as we look toward 2020, there’s this incredible coincidence: The timeline for America’s formal withdrawal from the Paris Agreement will be on November 4, 2020; the next presidential election will be held on November 3, 2020. And just like that, Trump has turned the next election into a referendum on climate change.

RL Miller, co-founder of Climate Hawks Vote, said it best: “Trump’s ‘fuck you’ to the world redoubles our determination to end his regime. We will take back Congress in 2018, expose him for the traitor and grifter that he is, and elect climate candidates up and down the ballot, culminating in the election of a climate hawk president on November 3, 2020 to restore America’s place in the world.”