Woman shuts down body-shamers who say girls over 200 pounds can’t wear what they like.

“There is no number, high or low, that dictates if you’re worthy of feeling beautiful.” 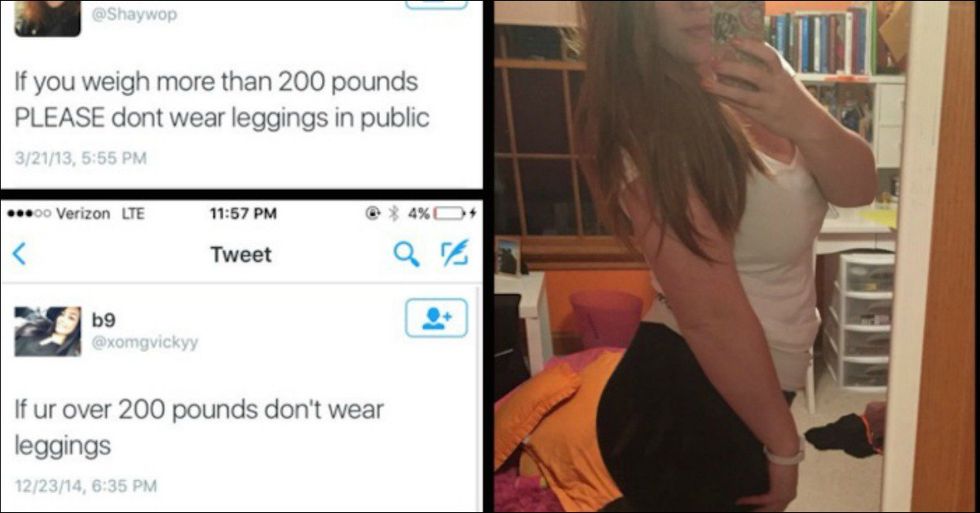 People often slam men for telling women how to look or what they can wear based on their body types. But the same type of shaming often comes from women.

A study published by Bravo found that nearly 63 percent of women said they’d been body shamed by their mothers, and close to 62 percent said they’d experienced it from their friends.

Sara Petty, a 20-year-old student at Bowling Green State University, noticed that a lot of women on social media were telling each other what to wear and decided to call them out. Not just by shaming them on Twitter but by proving that larger girls can look fantastic wearing things they supposedly shouldn’t.

“I had seen a tweet from someone saying that 200-pound girls shouldn’t wear bikinis,” she told The Huffington Post. “I just did some quick searches and found a bunch of similar tweets, so I decided I could do my part to chip away at body-shaming however I could.”

She posted her photo shoot on Twitter where it received over 93,000 retweets and 110,00 likes.

“Im sorry but if you’re like 200 pounds you shouldn’t be wearing a crop top.”

“It is not acceptable to wear booty shorts while being 200+ pounds.”

“If you weigh more than 200 pounds PLEASE don’t wear leggings in public.”

She also called out the women who tear each other down.

After posting the pictures, Petty noted that all the tweets she picked out were from women.

People on Twitter thought that Petty’s photos were really empowering.

According to Petty, beauty has nothing to do with a number on the scale.

“I also hope that girls are able to separate who they are from the number that shows up on the scale, and realize there is no number, high or low, that dictates if you’re worthy of feeling beautiful,” she said. “Body-shaming will probably always be there in some way, but I hope my post helps at least some women feel beautiful in spite of it.”