Thanks To Trump, Thousands Of Women Are Gearing Up To Run For Office 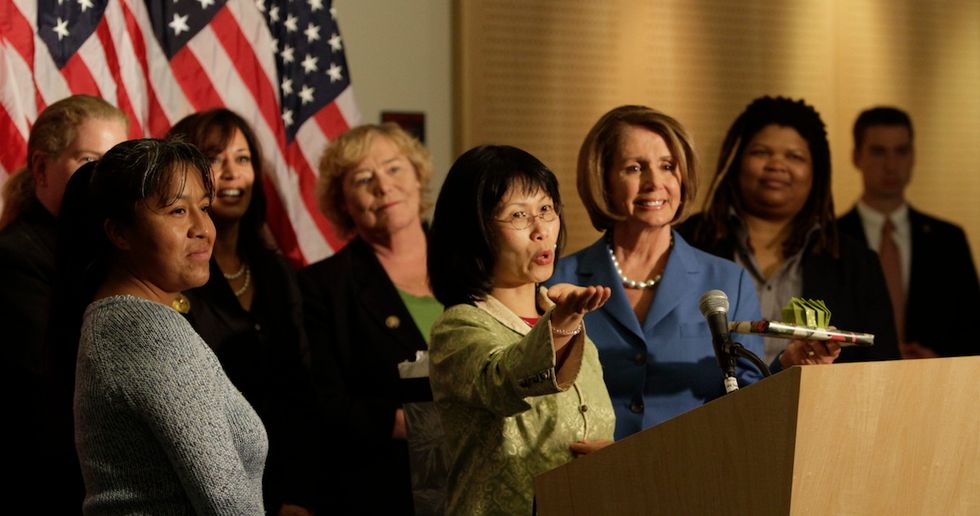 Nothing seems to better highlight how badly we need more women in government than the photo of Trump signing the global gag rule executive order while surrounded by white men. The order will reinstate a policy first introduced by Reagan that will pull funding from all nongovernmental organizations providing abortions and related health care services. This is a death sentence for thousands of women in developing countries and will have severe consequences well into the future.

It’s safe to say, reckless decisions like these would not pass under the watch of women. To build a future in which this is the case, women are registering to run for elected office through the nonprofit She Should Run. According to Time, more than 4,500 women have registered to run for positions on local and national levels. Through the website, women can either nominate friends or volunteer themselves to join the massive effort to get more female officials in office. After initially signing up and completing a basic profile, women take several courses as part of an online incubator designed to prepare them for the unique challenges of running a political campaign.

She Should Run’s co-founder and CEO Erin Loos Cutraro expressed to Time that she was surprised by the sheer outpouring of interest and support. Though she understands why, telling Time, “They feel compelled and want to be part of a fabric of voices that are wanting to be heard and wanting to make the case for smarter policy solutions and be part of that.”

Still, you’re probably left wondering why now? Why are women deciding to run now when the need has been there all along? While Trump’s flagrant disrespect for women and democratic principles may seem like the obvious answer, digging a little deeper reveals the systematic roadblocks that prevent women from even entertaining the idea. American culture’s ingrained sexist values dictate that women shouldn’t be too ambitious or they’ll risk emasculating the men in their lives. Or that a woman with children couldn’t possibly take on more responsibilities because raising children ultimately falls on her and not on her partner.

As Chimamanda Ngozi Adichie so eloquently explained in her TED talk and book, We Should All Be Feminists, “Culture does not make people, people make culture.” It is no more “natural” for men to assume positions of power than it is for women to assume positions of servitude. Modern times require us to rely—not on our brute strength to survive, but on our adaptability and intellect, which are both genderless qualities. Having women equally represented in government brings us one huge step closer to the culture viewing them as equals as well.