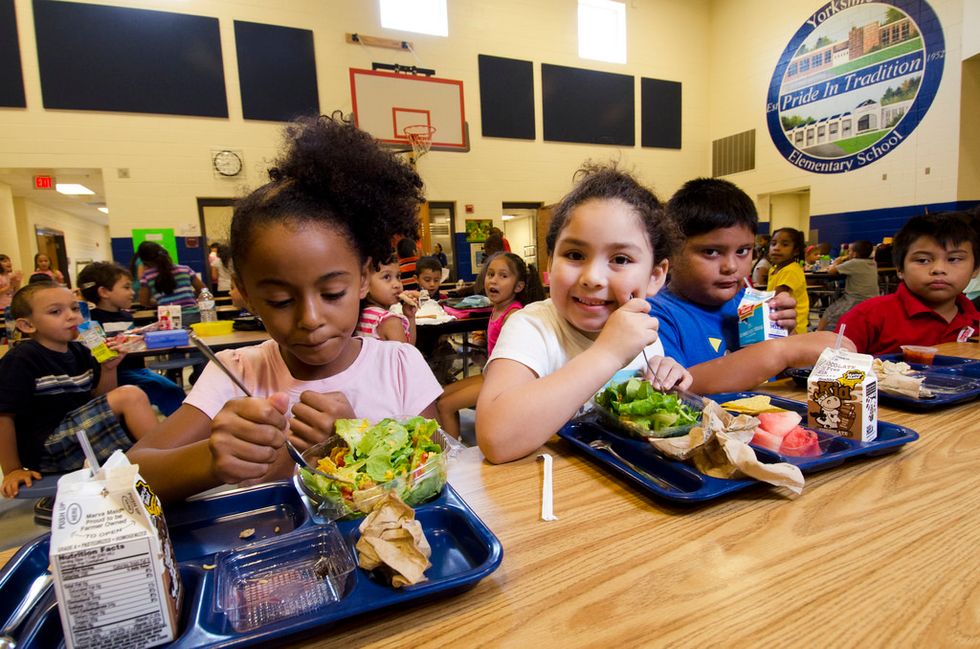 When you’re a fourth-grader, you are completely reliant on your parents for money—which makes it difficult when they don’t give you enough to cover the $2.68 hot lunch at school. What happens next varies by state, but outstanding balances on cafeteria accounts frequently result in some kind of public callout. In some cases, kids are forced to clean cafeteria tables to work off their lunch debt. One school in Alabama makes a habit of branding students with an “I need lunch money” stamp on their arms. And other times, children are denied lunch altogether.

This may sound like a new and particularly cruel punishment, but lunch shaming has been used in schools for decades. New Mexico Senator Michael Padilla knows the humiliation all too well; he used to trade his mopping skills with cafeteria workers to pay off his parents’ balance. He watched other kids stand in line for hot lunch, while he waited for a measly piece of bread. Padilla has put this experience behind him, but now he wants to eradicate this stigma from his entire state. Last week, he passed a new bill that explicitly outlaws lunch shaming in New Mexico public schools, instructing administrations to work directly with parents, leaving kids out of the equation. The bill is the first of its kind—an important step toward reducing the stigma kids face around money.

In the United States, about 31 million children a receive free or reduced-price lunch—and though more than that are eligible, many choose not to take advantage. Only 40 percent of eligible high school students take part in New York City public schools’ free and reduced lunch program, and Oregon estimates only 66 percent participation statewide. The main reason is the stigma attached to receiving free lunch: students have to stand in a separate line, or worse, be denied lunch altogether, signaling that their family can’t afford to pay the $2.68 that other kids pay. Many children, even those whose families qualify for reduced-price lunch, would rather skip the meal entirely than admit their low-income status to their friends.

Psychotherapist Hilary Jacobs Hendel explains that being singled out for difference creates a cycle of “toxic shame.” Kids are so sensitive to being different, she says, that “if lunch is associated with the shame of being different, they will avoid the difference” at all costs. High school English teacher Katherine West* sees this stigma play out on a daily basis in Boston’s public schools. When children can’t afford what their friends can, “the kids end up having to pretend they don’t want it,” West says. But in schools where almost every single kid qualified for a free or reduced lunch, Smith noticed “there was no stigma around it whatsoever.”

Unfortunately, for many of the children who experience lunch shaming, the stigma never leaves them. As Hendel notes, “the consequences of being shamed as children can be exacerbated in adulthood.” Lunch shaming, she explains, can manifest in one of two ways: Children either turn it on themselves and experience chronic fear, depression, and low self-esteem, or they become bullies. Both methods of coping—making themselves smaller or developing a “protective aggression”—are problematic. “The younger you are, the more prone you are to mental health problems,” Hendel says. In fact, kids may feel shame associated with money forever: “The brain makes associations. If a kid was made to feel bad for being poor, there's a good chance that they'll forever feel bad about being poor.”

Lunch shaming creates a significant psychological hurdle that many kids never recover from, a steep price to pay for a meal that costs less than a Starbucks coffee. New Mexico’s legislation sets an important precedent for the rest of the United States—one that takes the burden of financial stigma off children. Hopefully, it is only a matter of time before states across the country follow suit.

*Name has been changed.