Why My Kids And I Became Radical ‘Unschoolers’

One mom explains why she decided to let her 5-year-old daughter take the lead on her learning — from the comforts of home. 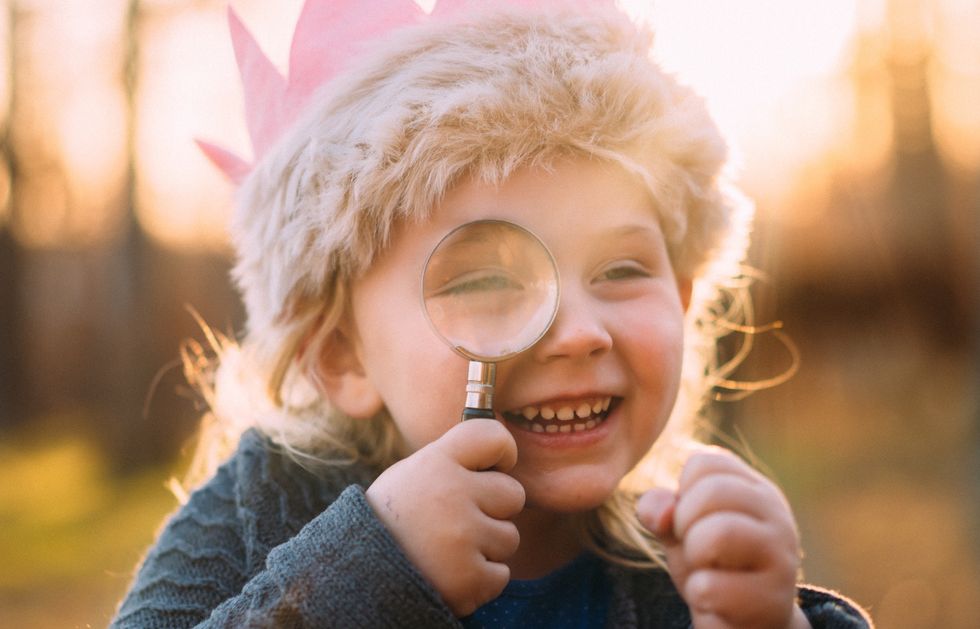 When my daughter first started going to school at a public kindergarten, I was thrilled. Eager to get back to (uninterrupted) work, I enrolled my younger son in part-time care. But it wasn't long before I realized that modern-day public education was having a disastrous effect on my child. While my daughter had always been smart and creative, she became bored and angry and struggled to keep up with the early literacy requirements, which were immense.

After just a few weeks in school, my once bubbly child began to show signs of stress and anxiety. She said she hated school and cried in the hallway at drop-off. At pickup, she’d kick the back of my seat, and in the evening, she tore at the corners of her homework in frustration.

With a mere 15 minutes of recess in an eight-hour day, my daughter felt pent-up. But she was also constantly made aware that she wasn’t hitting the mark. Her confidence was fading fast, and I felt powerless to stop it. While she had once been eager to learn and pick up a book, now she shuddered at the very idea of reading. At school meetings, we were instructed to do more at home – review sight words, read more, never miss a homework assignment. But it felt like too much for a 5-year-old. I was hardly surprised that my daughter railed against it.

[quote position="left" is_quote="true"]The harder I pushed her to succeed in school, the harder she pushed back. Really, she was crying out for help.[/quote]

I knew there had been big changes to public schooling in recent years. I’d read about the new common core requirements, reading-by-5 standards, and more time spent sitting at a desk for the youngest learners, which meant major cuts to recess and free time. I’d also, not so coincidentally, heard about staggering increases in early ADHD diagnoses for the youngest (and squirmiest) kids. But while I knew my child was spirited and didn’t have much interest yet in sitting still for more than a few minutes at a time, I figured she’d adjust.

I couldn’t have been more wrong. The harder I pushed her to succeed in school, the harder she pushed back. Really, she was crying out for help. Eventually, I couldn’t help but listen.

At the end of that grueling kindergarten year, I felt I had no choice but to take her out of school for home schooling while we searched for alternate options. To me, pushing my child through a system that so clearly wasn’t serving her didn’t seem like the right thing to do. Soon, we found a rhythm of our own. Even though I was eager to see my daughter learn, I observed what happened when I stopped pressuring her.

What I saw was incredible. She quickly got back to picking up and paging through books. She’d ask to be read to. She just didn't want to do it herself. So I kept reading to her. I got her audiobooks from the library. I let her try to enjoy stories again without the idea that if she wasn't yet able to read them herself that something was wrong with her. Deep down, I knew there wasn’t. But ignoring the voices from all around us — the knowledge that some children her age had been reading for years and well-meaning families who asked her to read to them — was hard to do.

Still, I started to see that my daughter actually learned better (and easier) when I followed her lead. Without a curriculum in place, I came to think of what what we were doing as “unschooling” instead of “home schooling.” Coined in the 1970s by John Holt, a former teacher and school reformer, the term lends shape to a non-school-based education focused on student self-direction. Researcher Peter Gray pointed out in a 2017 Oxford Research Encyclopedia paper that many “unschools” are official institutions:

“Unschoolers are officially registered with their local school districts as homeschoolers, but they are allowed by their parents to take full charge of their own education. ... Though these institutions are called ‘schools,’ and are legally classed as schools, they do not engage in schooling, as the term was defined at the beginning of this section.”

But not all of them are; rules vary by state. In order to home school my daughter, I had to sign a written statement provided by the state of Maryland and agree to check in with our local school district biannually. Though unschooling is unconventional, I thought of it as a project that would allow my child’s learning to happen naturally. She’d ask a question or a find a new book at the library, and it would lead us on a search to find answers. Sometimes it took us on field trips or simply a scroll through YouTube. But it was never a battle to get my kid to learn new things. Why would it be? She was in charge of what she was learning. While public education had been a bust, with unschooling, there was no fight to be had. My kid was willing and enthused to learn.

[quote position="full" is_quote="true"]If we want people to have the capacity and will to make a positive contribution to society, then they have to feel ownership of their learning.[/quote]

It’s hard to estimate the number of fellow “unschoolers,” but there is a growing number of people who teach their kids themselves for a variety of reasons. Most recent figures, for 2012 and published in 2016, show there were about 1.7 million children in the U.S. being home-schooled, which is nearly double since just 1999. I connected with many in our area, some who had been at it since the start and plenty who were also “accidental home-schoolers,” whose children shared strikingly similar experiences to my daughter’s.

Some followed a curriculum, but if so, it seemed there was always an awareness of the “follow the child” mentality as well, even if they didn’t call themselves unschoolers. Perhaps other people were tuning in to the idea that the fast-paced education model of today’s schools weren’t for every child — or simply that with different personalities, interests, and learnings styles, there isn’t one right way to educate. And while it may be a radical idea, perhaps children were also capable of directing their own education.

Chiara D’Amore, a unschooler mother of two with a doctorate in sustainable education, says that she’s a believer in nontraditional education for a number of reasons.

“If we want people to have the capacity and will to make a positive contribution to society, then they have to feel ownership of their learning – it has to be meaningful, engaging, and participatory rather than functional, passive, and prescriptive as is much of public education.” She added, “Educational opportunities that allow students to learn through direct experiences that have personal and societal relevance and significance better fosters the development of people who enjoy learning and have the ability to apply their knowledge and skills to the complex issues of our times.”

I know this may not be the path for everyone. I certainly watched my own daughter thrive when she directed her own education, but I also knew there were things she might not learn if she did not pursue them or if I didn’t force them on her. I quelled my fears with the knowledge that even in the most rigid of education models, there will always be gaps (just ask me to do pre-algebra, and you’ll understand what I mean). I also knew that successful people were experts in their own field. At some point, they had followed their own interests, too. Plus, I’ve seen my child’s progress, both academically and socially, far more than when compared with her stint in public school. I came to believe that my child, perhaps all children, are naturally ambitious learners when they’re given the space to be.

With plans to get back to work, I found a school that embraced unschooling’s “self-directed” model. My daughter, now 7, willingly ran into the building on the first day, and she hasn’t had a case of the Mondays since. In fact, it’s Friday afternoons, when school is over for the weekend, that usually bums her out.