Teachers And Parents Are Worried This Popular Show Glorifies Suicide

That’s why we should talk about it anyway 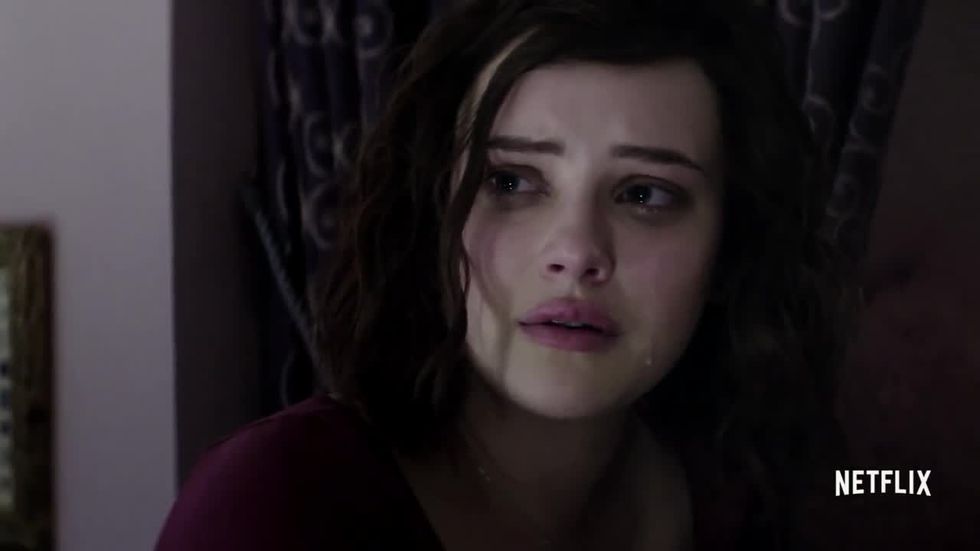 By now you’ve likely watched, heard of, or tweeted about Netflix’s latest original series 13 Reasons Why. Based on a 2007 bestselling novel, the 13-episode drama is already a smash success for the streaming service in its first week. Already, the glossily produced show has prompted more than 3.5 million mentions in response to the controversial topics it explores, from suicide and teen bullying to rape and assault. While most tweets sing the show’s praises, others offer a stark warning to some viewers.

i strongly recommend that you don't watch 13 reasons why if you have anxiety/depression, even if it's mild/moderate. it's not safe.
— Reid Sandlund (@Reid Sandlund)1492480491.0

Centering around a teen protagonist named Hannah Baker who slips into a mental crisis that nobody else can see, the Suicide Resource and Prevention Center has already published a teachers’ guide to show, cementing its status as required viewing for every teacher, coach, counselor, and parent in America, stating:

As a teacher, you have an important role to play. You have day-to-day contact with many young people, some of whom have problems that could result in serious injury or even death by their own hand You are therefore able to observe students’ behavior and act when you suspect a student may be at risk of self-harm.

The educators in 13 Reasons Why, including Mr. Porter, Liberty High’s counselor, Principal Gary Bolan, and Mrs. Bradley, Hannah’s communication’s teacher, each witness the early warning signs of Hannah’s descent, and each willfully ignore what they see. At home, Hannah’s parents miss their own warnings of their daughter’s own mental illness as they cope with their own financial crisis.

While Hannah’s life may be fiction, her story is anything but. As the Centers for Disease Control and Prevention reported, 17 percent of high school students have seriously considered suicide and eight percent have made an attempt in the previous 12 months. The Jason Foundation additionally reports, “More teenagers and young adults die from suicide than from cancer, heart disease, AIDS, birth defects, stroke, pneumonia, influenza, and chronic lung disease, combined.”

Bullying, depression, and mental health are all themes of the show that reflect all too realistically on teenage life in America. However, what’s missing might be just how hard it is for those in need to actually obtain mental health services. As the Department of Health and Human Services (HHS) reports, fewer than half of adolescents with psychiatric disorders received any kind of treatment in the past year, adding, “A social stigma continues to surround mental health disorders, and mental health care is frequently difficult to access.”

And sometimes, getting past social stigma isn’t enough. According to HHS, in 2013,10 percent of adolescents lacked insurance—often when they are covered, the amount of mental health services they can receive is often limited.

The HHS notes that initially identifying a mental health disorder is challenging, but often first identified at school. Its guidelines on the student behavior that teachers and parents should look out for, and are all behaviors Hannah exhibits in the show including a change in school performance, an inability to cope with problems and daily activities, changes in sleeping and/or eating habits, depression as demonstrated by sustained, prolonged negative mood and attitude, often accompanied by poor appetite, persistent nightmares, threats of self-harm or harm to others, frequent outbursts of anger, aggression, unusual behavior and more.

“School connectedness is the belief by students that adults and peers in the school care about them as individuals as well as about their learning,” the Suicide Resource and Prevention Center added in its prevention guidelines. “Connectedness is an important factor in improving academic achievement and healthy behaviors, and it is also specifically related to reductions in suicidal thoughts and attempts.”

13 Reasons Why can, and already is, acting as a gateway to open dialogue among teens and the adults in their lives. However, as Dan Reidenberg, executive director of Suicide Awareness Voices of Education (SAVE), told The Washington Post, the show has made it more important than ever for adults to intervene, as it glamorizes suicide and mental illness in a potentially dangerous way to already vulnerable teens. “There is a great amount of concern in the suicide prevention community around this series,” he told The Washington Post adding, “Young people are not that great at separating fiction from reality. That gets even harder to do when you’re struggling with thoughts.”

13 Reasons Why is a fictional story based on a widely known novel and is meant to be a cautionary tale.

You may have similar experiences and thoughts as some of the characters in 13RW. People often identify with characters they see on TV or in movies. However, it is important to remember that there are healthy ways to cope with the topics covered in 13RW and acting on suicidal thoughts is not one of them.

If you have watched the show and feel like you need support or someone to talk to reach out. Talk with a friend, family member, a counselor, or therapist. There is always someone who will listen.

Suicide is not a common response to life’s challenges or adversity. The vast majority of people who experience bullying, the death of a friend, or any other adversity described in 13RW do not die by suicide. In fact, most reach out, talk to others, and seek help or find other productive ways of coping. They go on to lead healthy, normal lives.

Suicide is never a heroic or romantic act. Hannah's suicide (although fictional) is a cautionary tale, not meant to appear heroic and should be viewed as a tragedy.

It is important to know that, in spite of the portrayal of a serious treatment failure in 13RW, there are many treatment options for life challenges, distress, and mental illness. Treatment works.

Suicide affects everyone and everyone can do something to help if they see or hear warning signs that someone is at risk of suicide.

Talking openly and honestly about emotional distress and suicide is ok. It will not make someone more suicidal or put the idea of suicide in their mind. If you are concerned about someone, ask them about it.

Knowing how to acknowledge and respond to someone who shares their thoughts of emotional distress or suicide with you is important. Don’t judge them or their thoughts. Listen. Be caring and kind. Offer to stay with them. Offer to go with them to get help or to contact a crisis line.

How the guidance counselor in 13RW responds to Hannah's thoughts of suicide is not appropriate and not typical of most counselors. School counselors are professionals and a trustworthy source for help. If your experience with a school counselor is unhelpful, seek other sources of support such as a crisis line.

While not everyone will know what to say or have a helpful reaction, there are people who do, so keep trying to find someone who will help you. If someone tells you they are suicidal, take them seriously and get help.

When you die you do not get to make a movie or talk to people any more. Leaving messages from beyond the grave is a dramatization produced in Hollywood and is not possible in real life.

Hannah's tapes blame others for her suicide. Suicide is never the fault of survivors of suicide loss. There are resources and support groups for suicide loss survivors.