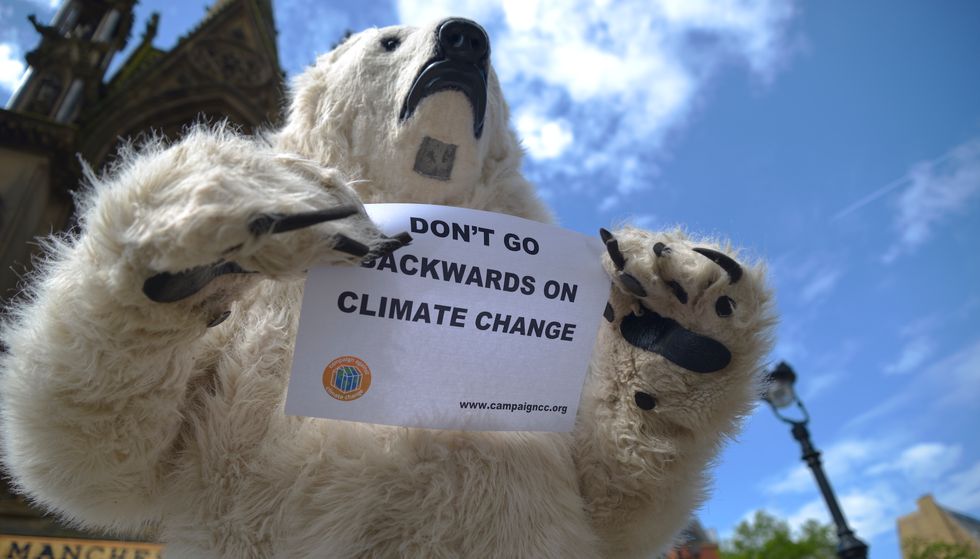 On Monday, New York Magazine published an exceptionally terrifying story about climate change — but chances are, you already knew the bad news: 2016 was the hottest year on record. New Orleans and Miami will be underwater by the next century. Odds are, we’ll see our last wild polar bear by the time we elect our 50th president. No wonder so many of us feel helpless when it comes to the future of our planet — if there’s nothing we can do to address impending disaster, what would we gain from even trying?

Plenty, according to a growing number of organizations and climate scientists who contend that global catastrophe is far from inevitable, especially if we reframe the conversation. “Cognitive science shows that promoting doom and gloom does nothing,” says Sarah Shanley Hope, executive director of The Solutions Project, a nonprofit that essentially functions as a cheerleader for people, organizations, and policymakers who want to stop climate change. That’s because humans are hardwired to avoid failure at all costs, according to research into apathy and inaction from Columbia University’s Center for Research on Environmental Decisions. Although a fear-based appeal might attract your attention, it’s an ineffective tool for motivation, either stopping you in your tracks or actively prompting negative behavior. A dire climate warning has the power to turn a conscientious recycler into someone who no longer sees a reason to avoid Styrofoam cups.

[quote position="full" is_quote="true"]Evidence reveals that when problems are presented as solvable, we’re much more likely to change our habits for the better.[/quote]

Fortunately, the evidence reveals that when problems are presented as solvable, we’re much more likely to change our habits for the better — especially if we’re given some guidance and a set of manageable tasks. “Solutions overwhelmingly move people to action,” says Shanley Hope, who with her team of civil engineers, decided to see if she could find a way to slow down global warming. After years of intensive research into a variety of climate innovations, she realized that the end of climate change was in sight. “The technology is ready. When the political barriers are removed, it’s even affordable,” she says. What the world really needed was a plan.

So in 2014, The Solutions Project released a 50-state roadmap for completely replacing coal, oil, and natural gas with wind, water, and solar energy — and it will be followed up with customized game plans for 138 more countries this fall. So far, New York, California, and Iowa have already partially adopted the group’s recommendations, which pinpoint achievable, cost-effective improvements to local jobs, transportation systems, and infrastructure, along with easy behavioral shifts for individuals, such as minimizing beef and dairy consumption.

Paul Hawken, co-founder of Project Drawdown — a coalition (named after a greenhouse-gas-reducing process called “climate drawdown”) comprising climate scientists, policymakers, and business leaders — agrees that reversing the effects of global warming is within our reach, and it can be done using tools that are already at our disposal.

More of a life coach than a cheerleader, the coalition spent a decade measuring the carbon impact of everything from our lighting systems to the family planning methods traditionally taught in schools. The organization recently released an eponymous book detailing their learnings, along with what Hawken calls 100 “no regrets” tactics that, if deployed at scale, would make the world a more secure, healthier, richer place without discernible downsides. Carbon-negative approaches, which bypass gradual behavior and policy changes by physically removing carbon from the air and turning it into construction materials or fertilizer, will be a key focus.

In the meantime, the more average citizens think about climate change as something to be addressed, rather than as something that will wipe our species off the planet, the more likely it will be for these solutions to be implemented worldwide. Both small-scale behavioral modifications and major political commitments are only possible if we focus on tangible ways to change course. So let’s stop talking about the apocalypse and start discussing our game plan.