Instead of Pokémon, Try Using Your Smartphone To Catch Tasty Wild Edibles

“We live in an accidental garden of free, delicious, nutritious food” 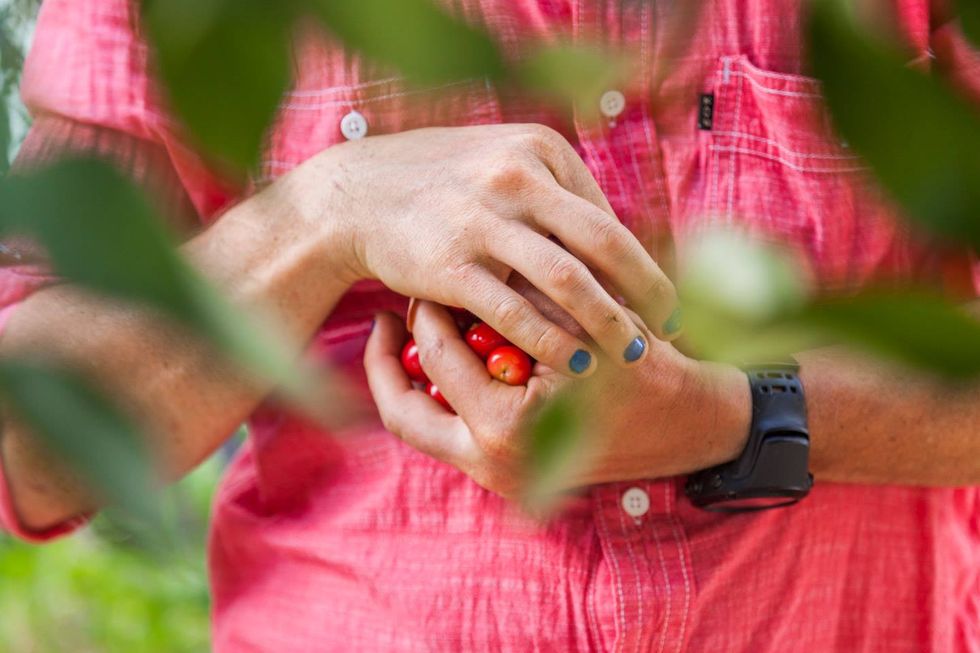 Succulent, just-plucked baby greens, gleaming wild berries, fresh local honey—these culinary delights can usually be had at your crowded farmer’s market when in season, though they tend to cost a pretty penny. But if you’re willing to stroll through your neighborhood with a keen eye and smartphone app, you can zoom in on the exact location of an endless bounty of fruits, greens, mushrooms, and healing herbs.

Image of sour cherries via Ethan Welty of Falling Fruit

A variety of global interactive maps and apps have popped up in recent years, all geared toward turning us into successful foragers overnight in an attempt to reduce our astonishing food waste. In the United States alone, 40 percent of food goes to waste, adding up to over twenty pounds of food per person per month.

[quote position="left" is_quote="true"]Food is actually all around us and we can interact with it and cultivate respect for our environment that way.[/quote]

"Food isn’t just on grocery store shelves,” says Caleb Phillips, one of the founders of Falling Fruit, a crowdsourced map of freely growing edibles for the contemporary urban forager. A data scientist at the National Renewable Energy Laboratory in Golden, Colorado, Phillips is also an adjunct professor of computer science at the University of Colorado. “Food is actually all around us and we can interact with it and cultivate respect for our environment that way.”

Phillips’s map includes 1,720 different types of edibles distributed over 1 million locations, aspiring to be the most comprehensive map of its kind. Falling Fruit is open for any forager to add their own public orchards, food forests, city trees, and farmers’ open fields. Simply type in your address, zoom in on your city, filter by edible type, and you’ll find everything from cherries to gingko to chanterelles. Foraging locations are marked with colored dots; click and an informative box will pop up with a description of the plant, often along with advice on how to find it.

Falling Fruit is available via web as well as on both the Android and iTunes stores, offering GPS tracking, photos, and multiple filters. “Right now I’m standing next to three crabapple trees,” says Phillips, “and I could upload them all with a single click, and add a descriptive comment. Comments are totally free-form and it’s been amazing to see people write whole stories about a beloved tree, or even add recipes.”

[quote position="right" is_quote="true"]Before I started foraging, I saw the world as largely hostile and inhospitable, with people competing for limited resources.[/quote]

“Before I started foraging,” says Stark, “I saw the world as largely hostile and inhospitable, with people competing for limited resources.” Now, he says he realizes that “we live in an accidental garden of free, delicious, nutritious food. And even dense urban environments are ecosystems in which sustaining wildness erupts exuberantly.”

Foraged food may be more nutritious than its commercial cousins, as well—tests of nutrients and fiber have revealed that, for instance, foraged dandelion has two times as much fiber and calcium, and 2.5 times as much iron as farmed dandelion.

[quote position="left" is_quote="true"]The idea is that if millions of people upload all these observations, we will understand how climate change and civilization are impacting ecological systems.[/quote]

Both Falling Fruit and BOSF participate in iNaturalist, a crowdsourced citizen scientist project where people can upload observations about everything in their homes and neighborhoods, from a cherry tree to a fox fleeing through the back yard. Says Philips, “The idea is that if millions of people upload all these observations, we will understand how climate change and civilization are impacting ecological systems. We continually pull new data from iNaturalist, so when someone adds a fruit tree there, it ends up on Falling Fruit.”

For foragers off the beaten track, hiking or backpacking through mountains or country fields, the most popular outdoor iPhone app, called Gaia GPS, can be adapted to mark your hiking path and foraging finds for sharing with friends or returning later on. Still, certain caveats should be observed when foraging, care taken to avoid poisonous mushrooms or plants, as well as researching how to prepare an unfamiliar plant (some plants, such as bamboo shoots, which BOSF has discovered in the East Bay area, need to be peeled and boiled to remove hydrocyanic acid.) If you’re not certain whether that plant is safe, it’s best to leave it alone.

With care and a little practice, the plants in the sidewalk cracks can become old friends to be greeted everywhere you go.