From Chocolate To Cocktails, This Medicinal Ingredient Makes Everything Better

Hitting the sweet spot in more ways than one 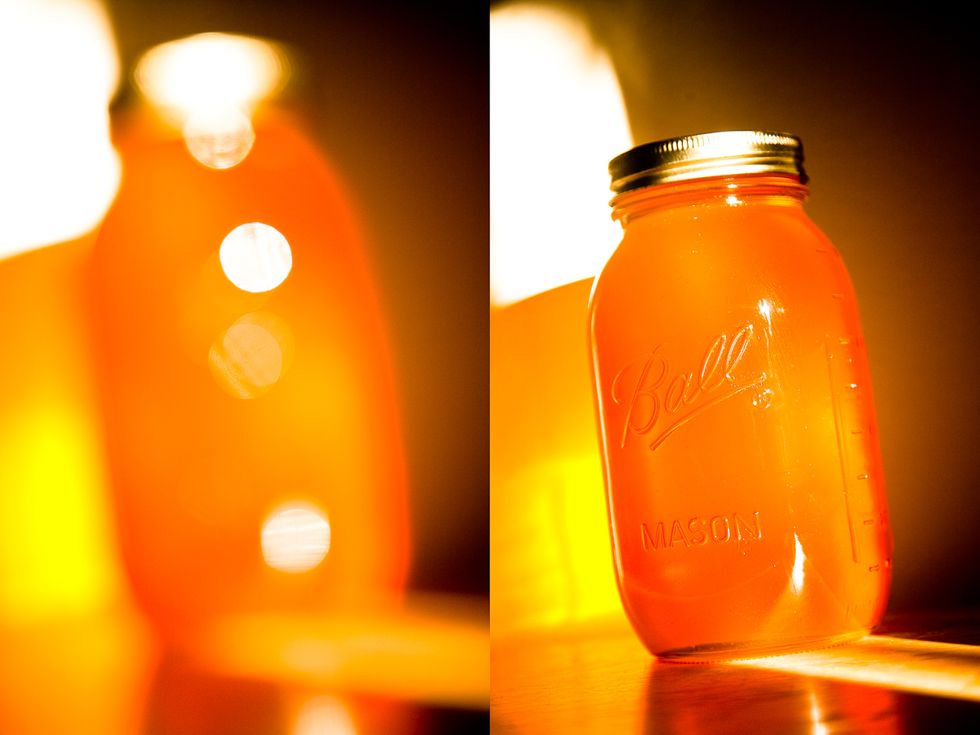 I'm sipping a shot of ginger honey hooch below the restaurant rooftop of Louie's of Mar Vista in California. The building has been in Chef John Atkinson’s family for over two decades; once a butcher shop, it now serves as a restaurant and bar. Atkinson hails from Manhattan Beach, but became a chef in South Carolina after a stint studying history. His alcohol menu is an extensive, impressive display of his learned Southern hospitality, but the section that stands out most is "From The Hive"—cocktails inspired by honey from bees that were found in a sign above his restaurant 20 years ago.

“We noticed we were wasting ginger that we kept cutting for meals, so I thought about boiling it and adding in sugar,” Atkinson says. “But then the ginger was so strong that to balance it out, we needed something sweet. So we tried the honey from the hives.”

I take a sip of the hooch. It's as smooth as the honey pours. It drips slowly down the throat, and it doesn't burn like you’d expect it to. Normally the sweetest thing on the menu, honey acts as an equalizer at Atkinson's bar: It balances the harshness of the liquor he uses, or it enhances neutral spirits like vodka to make more complex drinks.

The woman behind this incredible cocktail addition is the restaurant’s beekeeper Ruth Askren, who started managing two hives at Louie’s once they were removed from the sign. Now, after much maintenance, Askren has been able to grow Louie’s roof bee yard to four hives.

Honeybees produce an ingredient that's both a delicious cocktail ingredient and a medicinal healer. Pretty cool. Photo by Don Hankins

“There are botanical gardens all around us with the ocean up the way. The weather is warm, but cool at night, so it's a perfect atmosphere for the bees," Atkinson says.

Though they normally prefer warmer climates, bees do best when a water source is present, and their salt-sensing feet love the ocean. Once a month, Askren climbs a ladder above the restaurant to check in on her hives. So far, she’s harvested honey four times this year, mostly for Louie’s cocktail menu. Occasionally, she’ll put aside some combed honey that Atkinson uses on his burrata plate.

[quote position="full" is_quote="false"]It drips slowly down the throat, and it doesn't burn like you’d expect it to.[/quote]

“Because these bees are foraging from all different plants, you're getting a real unique blend of honey that brings so much depth of flavor to John's menu,” Askren says.

Although bees don’t travel far to make their honey, world-renowned chef, food writer, and talk show host Andrew Zimmern has done just so to obtain it. An adventurous traveler with a deep love of bees and beekeeping, he’s come across honey in countries across the world that taste wildly different. In fact, he’s gone so far as to call the golden stuff “the ultimate expression of terroir.”

“Honey from Sardinia tastes of the wildflowers on the hills above the apiaries, while the same bees on the other side of the hill make a honey that reeks of the wild thyme and rosemary,” says Zimmern, who has over 30 varieties of honey from around the globe. “Some rare Syrian honey I bought in Aleppo is precious to me beyond words. I can't bear to finish the tub.”

You may know Andrew Zimmern as a globe-trotting, adventurous eater and television personality, but did you know he has a serious obsession with honey? Photo via Andrew Zimmern

But Zimmern is more than just a collector; he manages several colonies in a family apiary that’s located at the University of Minnesota through their Bee Squad educational program. Zimmern capitalizes on the full-flavored golden honey that his bees produce by carefully curating their surroundings.

“Our garden plantings are designed to maximize the flavors of wildflowers, basswood, cone flowers, and lavender that we like in our honey,” he says.

“We don’t use [rosemary-heavy] honey in our morning tea, but that same rosemary honey paired with goat’s milk cheese and grilled lamb makes a superb plate,” Zimmern says.

[quote position="full" is_quote="true"]Some rare Syrian honey I bought in Aleppo is precious to me beyond words. I can't bear to finish the tub.[/quote]

The flavor of honey has everything to do with the flower source from which it comes. As bees visit plants, they collect pollen and nectar as food for their colony. Nectar stored within a bee’s stomach is passed from one worker bee to another until water within the nectar diminishes and becomes honey. Avocado flowers make a dark and strong-tasting molasses-like honey and sage honey is mild and light, whereas honey made from the nectar of goldenrod smells like feet.

In the United States, 50 percent of honey is monofloral, and the rest is blended, with clover being the most commonly identifiable source. However, Askren is certain the bees at Louie’s have been foraging mostly from eucalyptus across the street from the hive.

“The eucalyptus honey is dark with a caramel flavor, whereas clover is more floral and pale-colored,” she says.

Back at Louie’s bar, Atkinson takes me through their honey-infused drink menu. The Woodbark is a digestive shrublike drink that tastes like it’s out of the 19th century; the fennel bitters and orange oil balance with the honey to compliment the whisky. The depth of honey in the Peach Buzz gives the peach bitters, gin, lemon, and grapefruit floral undertones that “would be hard to recreate with sugar,” Atkinson says.

In two to three weeks, Atkinson will make another batch of ginger honey hooch. I ask him if he’ll ever get into making mead, which is, according to The Beekeeper’s Bible, the first fermented drink known to man made out of honey, spices, and other flavorings—but he’s not quite there yet. After all, his honey supply all depends on how his bees are doing on his roof.

“The bees are paying rent, but we have to respect that they need honey too,” he says.

Zimmern uses honey not as a balancing tool like Atkinson does, but rather as a sweet additive to the spicy and savory meats that he often features in his recipes.

[quote position="full" is_quote="false"]The depth of honey in the Peach Buzz gives the peach bitters, gin, lemon, and grapefruit floral undertones that “would be hard to recreate with sugar,” Atkinson says.[/quote]

“The trick is what the end use for the pairing is,” he says. His favorite pairings are of the game and offal varieties, like a honey-and-lemon baked rabbit, or crispy fried sweetbreads tossed with chili and vinegar right before serving with honey. He also uses it as a compliment to ricotta, and has tossed everything from pork to bitter greens to carrots in the sweet stuff. Ultimately, he hasn’t found a spice that doesn’t mix well with honey.

For many, however, using honey has a silver lining beyond just the rewarding flavor play: it’s good for you. We already have substantial evidence that it’s antibacterial, but it also may be a better hangover cure than your current bacon-egg-and-cheese ritual: according to The Beekeeper’s Bible, honey is a “natural sobering agent” that provides the body with sodium, potassium, and fructose, which aid recovery and accelerate alcohol oxidation in the liver. It’s also 100 percent absorbable by the human body, meaning that unlike other sugars, honey doesn’t require enzyme digestion like all other sugars do. Luckily, Atkinson puts in only a tiny amount of honey to keep the “sobering agent” ineffective in his drinks.

[quote position="full" is_quote="true"]It’s the most guilt-free superfood. We source the finest ingredients according to these principles: purity, traceability, and sustainability.[/quote]

For husband-and-wife team Vanessa Morgenstern-Kenan and Ron Kenan, honey was the healthiest choice for their new family. When Vanessa was pregnant with their twins Carmel and Julia in 2010, she craved sweets, but wanted to protect herself from gestational diabetes. After trying agave, coconut sugar, molasses, and stevia, she found that raw honey from the family’s own hive was the only truly healthy sweetener, so she started making chocolate with it. It was only a matter of years that their business Hnina Gourmet Raw Chocolates was born in 2014. The name Hnina, which is Vanessa’s middle name, means “pure goodness.”

To be truly organic, the Kenans had to ensure that no pesticides were being used within 13 miles of their hives, something they couldn’t guarantee in any part of the United States. In addition, the honey had to be raw versus pasteurized, “because once it was pasteurized, the heat would turn it into refined sugar,” Vanessa says. So, to make sure their honey remained loaded with untainted enzymes, minerals, natural antibiotics, and antioxidants, the couple traveled to Oaxaca, Mexico.

They went to the right place: considered a health drink by the Mayans, Aztecs, and other ancient civilizations in Mexico, Central, and South America, chocolate was historically used to restore humor and balance, improve mental fatigue and poor sexual appetite, cool fevers, and was revered for religious purposes. Like honey, it was also used as a natural energizer. So when the Kenans combined raw cacao, naturally sprouted seeds, nuts, and honey to make Hnina chocolates, their goal was to create a healthful dessert that would be anti-inflammatory and absorbable in the body, all while packing in nutrients without high levels of calories.

“It’s the most guilt-free superfood. We source the finest ingredients according to these principles: purity, traceability, and sustainability,” Vanessa says.

Although it stands on its own as a natural sweetener, honey proves to be a life-sustaining food, both for bees and humans. After all, without bees, we wouldn’t have a third of the produce we eat today. However, the usage of pesticides, combined with pathogens, poor nutrition, and poor honeybee genetics, have all contributed to colony collapse disorder, slowing honey production down. But beekeeping efforts like Askren, Atkinson, and Zimmern’s are part of a budding movement to educate the public about how to manage hives safely and protect the bees.

“Bees are necessary,” Atkinson says, “We can all do our part to keep them here, and that’s why I have a hive on my roof.”

If you’d like to be a part of the movement in saving the bees, learn more through conservation organization Honeylove.