In search of small government, the federal government is spending almost two times more the necessary to hire outside contractors. Huh? 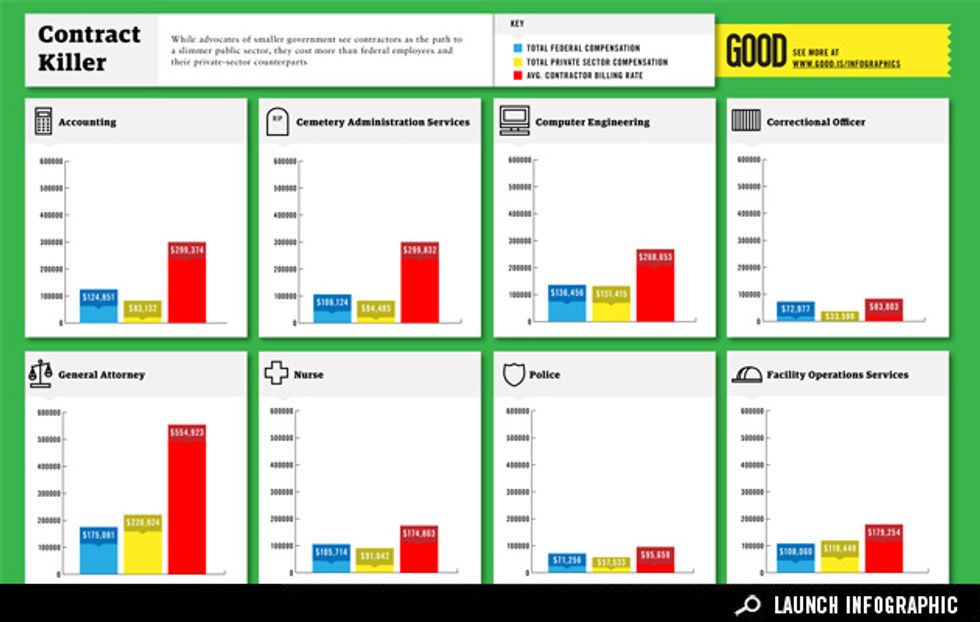 Yet that’s exactly what the federal government is doing: Outsourcing work to contractors that could be performed far more cheaply by public employees. A new study by the Project On Government Oversight revealed that contractors earn 1.83 times more than public employees, and more than twice the compensation paid in the private sector for comparable services.

While the federal workforce has remained steady at about 2 million people since 1999, the contractor workforce increased from 4.4 million to 7.6 million in 2005, costing approximately $320 billion a year. In 33 of 35 occupational classifications, paying government employees would be cheaper than hiring a contractor.

POGO points to two main reasons for the huge waste. One is the steady drumbeat of small- and anti-government rhetoric from the right, which has resulted in the creation of a “shadow government” in which contractors perform services once handled by public employees at far greater cost—which, ironically enough, increases the size of the federal budget.

The second reason is that the government is ill-prepared to negotiate market-rate fees because it does not manage data about payments and processing or maintain clear standards about occupational specialties and justifying outsourcing. There’s also the issue of no-bid contracts and other shady paths for companies to find lucrative arrangements working for the government.

As a solution, the watchdog group recommends a number of procedural enhancements to justify contracts and collect more data about them while limiting their compensation. More broadly, though, the U.S. government needs to realize that smaller government is a meaningless goal, but efficient, effective government—one that uses cost-effective methods to perform tasks appropriate to its mission—is something worth striving for.