Even the basic, low-dollar questions stumped the players. 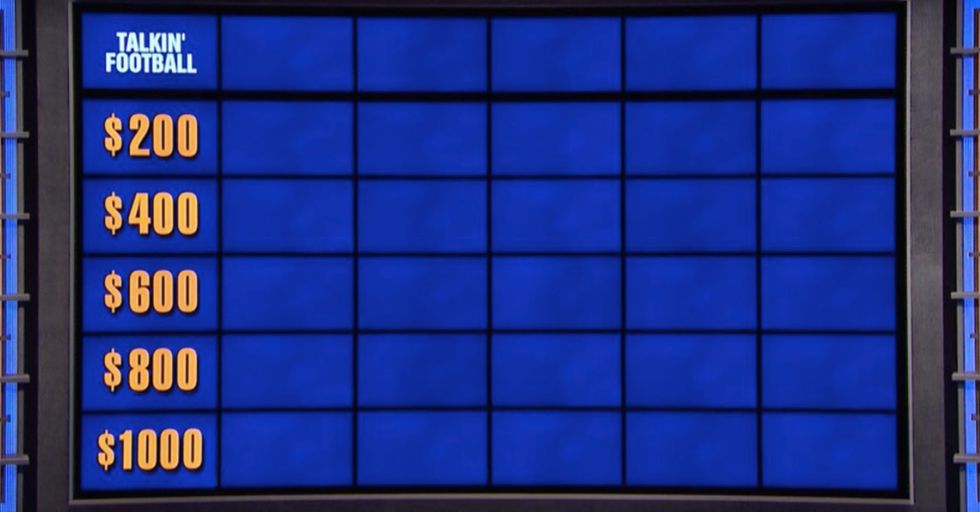 Every “Jeopardy” contestant has their own blind spots, but historically, sports-related questions have proven particularly difficult for the show’s guests. Never was that fact clearer than in Thursday’s episode in which all three contestants went 0 for 5 in the “Talkin’ Football” category, presumably serving as a tie-in to this weekend’s Super Bowl.

During the game, the contestants clearly were not looking forward to the category, having tackled the round’s 25 other questions before venturing into the murky waters of sports trivia.

This tweeted image, sent out from the official Jeopardy account, speaks volumes as to the players’ aversion to the subject.

When the contestants were left with no other options, they tackled the following five football questions with absolutely no success, leaving host Alex Trebek making one of his trademark dry quips about maybe just ending the suffering and cutting to a commercial. Unfortunately, the questions continued.

Knowing full well that posing the $1,000 question was an exercise in futility, Alex Trebek nonetheless did so. The video required the contestants to give the nickname of the Minnesota Vikings’ iconic defensive line that led the team to four Super Bowl appearances.

The entire category came and went in about 90 seconds. You can view the clip below, or try your hand at the screenshotted queries above before learning the answers.

$600 – What are offsetting penalties?

It’s not every day that the jocks have the edge over the academics on “Jeopardy,” but as this instance (once again) confirmed, the show’s sports categories certainly present that opportunity.