This Wild Acrobatic Activity Is Now Officially Considered A Sport

But hold on, some municipalities still consider the sport to be a criminal activity 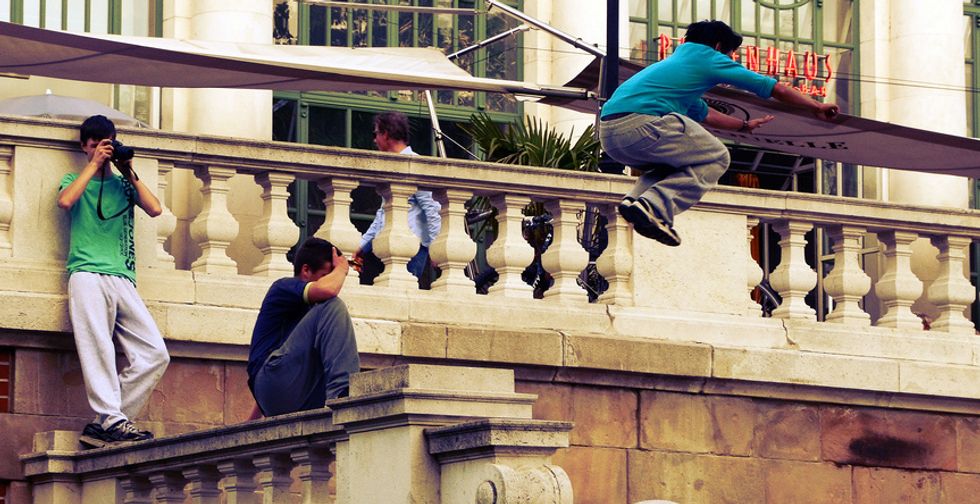 Running, leaping, and climbing through the city isn’t just a test of strength and stamina—it’s also now an official sport in the U.K. Parkour—a form of urban acrobatics, originating in France—is now officially recognized by sports councils across Britain. On a practical level, this means that it can be on national educational curricula, apply for lottery funding, and access the benefits enjoyed by other major sports.

This is a big step forward for the development of parkour, which already has about 35,000 practitioners—or “traceurs”—in the U.K. alone. There’s no typical traceur; participants can range from very young children to those with Parkinson’s disease, and there are new people starting up all the time.

As well as having obvious physical health benefits, parkour also continues to show signs in research of contributing to positive mental health. It’s often practiced in groups, which fosters social bonds between people—as encouraging each other to engage with the city in a constructive way, and offering an exciting alternative to the lure of more nefarious and destructive group activities.

Not everyone sees it this way: some still regard the sport as dangerous, antisocial and in some cases, even criminal. Yet evidence suggests that these fears might be misplaced. After all, every sport carries risks: in 2013, 15 people died while hill-walking, and in 2014, 113 people were killed while cycling. Any death is tragic, and all possible measures should be taken to make sure that activities are safe—but there’s no reason to think that parkour is much riskier than any other sport.

At the very core of parkour is its intense, visceral, and creative connection with the environment— the feel of flesh on the city. Those who partake in the sport do so not from a desire to commit a crime, but to escape the daily routine and experience the city in different ways. Faced with an urban environment that is rapidly sacrificing public space to private capital, it’s inevitable that some traceurs will trespass.

This doesn’t make parkour antisocial, though. Quite the opposite, in fact. It reaffirms the connection people can have with the city—one that is being lost in the competitive throng of contemporary urban life. The practice of parkour is still relatively free from the pressures of commodification and competition. It encourages people to work together, learn from each other, and fleetingly reclaim city as a common civic space.

Parkour also forms the basis of a growing global online community. This activity is predominantly practiced by tech-savvy young people, who leverage the power of social media to improve their skills, learn new moves, and showcase their talents to the rest of the world. Parkour’s popularity has a lot to do with the way it allows people to meld their online and offline worlds together.

Innovation and creativity are two of parkour’s major strengths as a sport—and many online videos, Hollywood films and computer games incorporate the spectacular physicality of parkour into their stories and imagery. As such, parkour is at the leading edge of sporting activity, blending as it does physical prowess, digital literacy, and visual creativity.

For all these reasons, parkour’s recognition by U.K. sports councils marks an important and welcome moment. By bringing parkour into the cannon of national sports, it may force urban planners and local councils to redress some of the actions taken against the sport. For instance, Horsham council is intent on banning parkour from the town center, while “no parkour” signs are increasingly common across the country. Official recognition sends out a signal that such regressive policies should be countered.

Parkour improves physical and mental health. It offers a way for citizens to resist the increasing privatization taking place in cities around the world. It promotes creativity, connectivity, and civic activity, all while showcasing what incredible things the human body is capable of. In many ways, parkour offers us a glimpse of the future of sport—and it’s looking bright.