The outspoken coach ripped Trump for his “cowardice” during widespread public outcry. 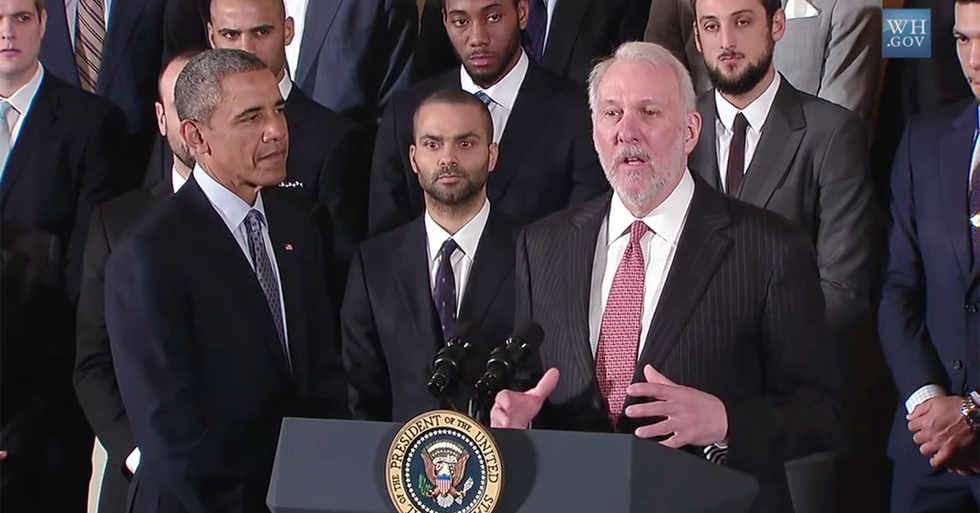 On March 24, 2018, nearly a million protesters took to the streets of Washington, D.C. — and hundreds of thousands more marched elsewhere — to advocate for gun control.

When notably outspoken and socially progressive Spurs coach Gregg Popovich was asked a day later for his thoughts on the demonstrations, he was quick to not only praise those who took to the streets but also to call out Trump for once again burying his head in the sand when it comes to a prevailing call for change.

Popovich gave a thoughtful and lengthy assessment of the issue, citizens’ responses, and the lack of White House leadership in responding to peaceful public pleas for gun control reform.

The transcript of the coach’s comments comes via CBS Sports:

“Well, the future of the country is a pretty big thing. There's not one event that is going to signal what it's going to be like in the future. But I can tell you that I'm sure most everybody is going to be unbelievably proud and excited about those students and what they've done. Because our politicians have certainly sat on their thumbs and just hidden. To most, it's almost like a dereliction of duty to watch all these people get killed with guns — in so many different ways, whether it's nightclubs, or schools, or cities. And it seems that the power and the money are more important than the lives. So to see these teenagers demand this, it takes you back.

You think about it, the civil rights movement didn't flip or change until people saw things on TV. They saw policemen with fire hoses and dogs biting old black men and women, people being beaten with sticks. Then you get to the Vietnam War, and we're in it forever, and then what happens? Film starts coming back with arms and legs blown off and coffins, and I can still remember the little girl who was napalmed running down the road. Things change when that happens. And in this one, in this situation, these students are the same way. Images are important. Obviously you can't put an image on TV of what happened in that classroom, that would be pretty horrifying.

But if you just sit for a moment and imagine those bullets going through those bodies, and what those bodies might have looked like afterwards, how can the president of the country talk about all the things he's going to do, and then go have lunch with the NRA and change it? It's just cowardice. A real leader would have been in Washington D.C. this weekend, not at his penthouse at Mar-a-Lago. He would have had the decency to meet with a group, to see what's going on, and how important it is, and how important our children should be to us. So for all those politicians involved, it's just a dereliction of duty.

They can talk about the age limit, and background checks and all that, but the real discussion is what kind of a country, what kind of a culture do we want? You go back and investigate the second amendment. What does it really mean today? What are we willing to give up for the safety of our children. The people in power don't want to talk about that. The fact that our president left town, is a real indication of how much he really cares about anything other than feeding his insatiable ego.”

Popovich continues to be a prominent voice in support of gun control, having made heartfelt statements in response to the Sutherland Springs church shooting and various Trump policy issues — to the point that he was recently compelled to explicitly state he has no interest in seeking public office.

Another vocal proponent for gun control, Golden State Warriors coach Steve Kerr, offered this tweet on the morning of the march, demonstrating once again that those in the realm of sports and other seemingly disparate spheres from politics are stepping up in the absence of leadership from Trump.

Reminder today to get out and march! Thank you to the young generation for inspiring all of us and reminding us tha… https://t.co/ZYhOc7anVu
— Steve Kerr (@Steve Kerr) 1521908977.0