‘Watching my dad get on a bike was like watching a penguin spread its wings and take flight. He'd take off at inhuman speed, a smile on his face, and never look back’ 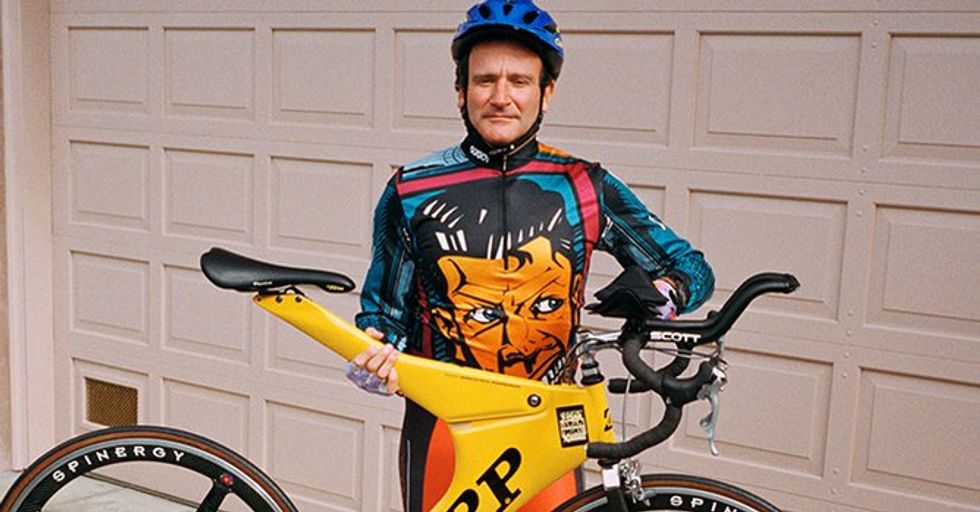 It’s been two years since comedy legend Robin Williams died, but his influence lives on not just through his professional work, but through his hobbies and passions as well.

Many fans may not have known that Williams was an avid cyclist and connoisseur of bikes, with a collection of more than 80. Williams’ family has put the entire collection up for auction, with the proceeds expected to generate more than $200,000 for two different organizations: the Challenged Athletes Foundation, which provides grants to athletes with physical disabilities and the Dana and Christopher Reeve Foundation, which is dedicated to funding spinal cord injury research.

The comedian had many ties to the world of cycling, befriending legends in the sport such as Greg LeMond and Lance Armstrong and was known to hop on bikes for short rides even while on film sets. His daughter, Zelda, fondly recalls, "Watching my dad get on a bike was like watching a penguin spread its wings and take flight. He'd take off at inhuman speed, a smile on his face, and never look back."

With the news of the auction, Williams’ family issued a statement saying, “We hope these bikes will bring their new owners as much joy as riding them, and helping these causes, always brought him.”

Conan O’Brien, who received a bike from Robin during a “low moment” in his life, prepared a video discussing both the cause and Robin’s passion:

As you would expect, news of the auction is bittersweet. While it does benefit causes that were close to the late comedian’s heart, it also serves as reminder of the talent and person that the world lost:

The auction ends on October 25th, so if you’re interested in bidding, donating, or would just like a look into one of Robin Williams’ many extracurricular activities, visit the auction site right here.