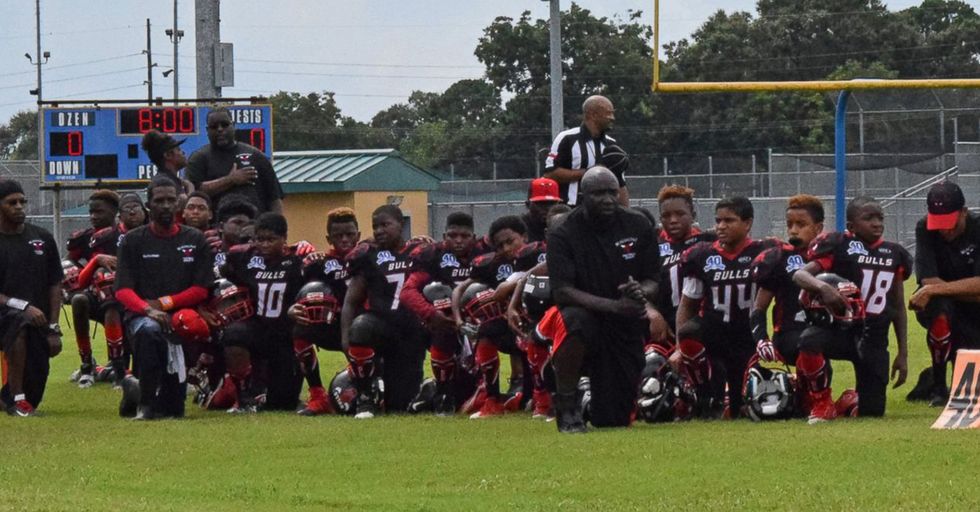 The Beaumont Bulls, a youth football team in the town of Beuamont, Texas, will continue to kneel during the pre-game national anthem despite having received violent threats as a result of their demonstration.

Attention surrounded the team on September 4th when the coaches and players, taking a cue from San Francisco 49er quarterback Colin Kaepernick, took a knee and placed their hands on each other’s shoulders during the playing of the National Anthem prior to their game.

April Parkerson, the mother of 11-year-old Jaelun, the team’s running back, said to ABC News that the expression was never meant to serve as a condemnation of the country’s military or law enforcement institutions. Rather, she said the boys and coaches did it to bring attention to the racial injustices that are prevelant throughout the U.S.

Nonetheless, the team has found itself under fire, particularly on social media, where many criticisms have turned ugly, pledging or threatening violence against all involved, adults and children.

The team’s coach, Rah Rah Barber, who helped organize the demonstration was called out to be lynched by a Facebook user from Oklahoma. In the face of this threat and several others delivered to the pre-teen boys on the team, April Parkerson says the protest will continue. "Hatred like that is everywhere. But there's also so much love."

When asked about his reaction to the menacing comments, Barber said simply, "I ignore it. It's the kids I worry about. If they ever felt threatened, I would advise their parents to reach out to authorities."

The next week’s game garnered attention in response to the threats, but was played safely, resulting in a 19-0 victory for Beaumont and an appearance by local Black Panthers:

Players elsewhere in the country are also receiving similar threats for protesting by kneeling during the National Anthem. A Cleveland high school player, 16-year-old Rodney Axson, Jr. has received a death threat and messages bearing racial slurs for his act that same weekend:

Several days following the news of the death threats in Beaumont, the Bulls issued a statement to CBS 58 in Milwaukee which read:

“Their choice to express themselves has now made them a target for hateful comments and threats to their lives as well as those working with the team by those in our community and surrounding areas.”

The FBI has not yet publicly commented on their investigation of the death threats made to either the team members in Beaumont or Rodney Axson in Cleveland.