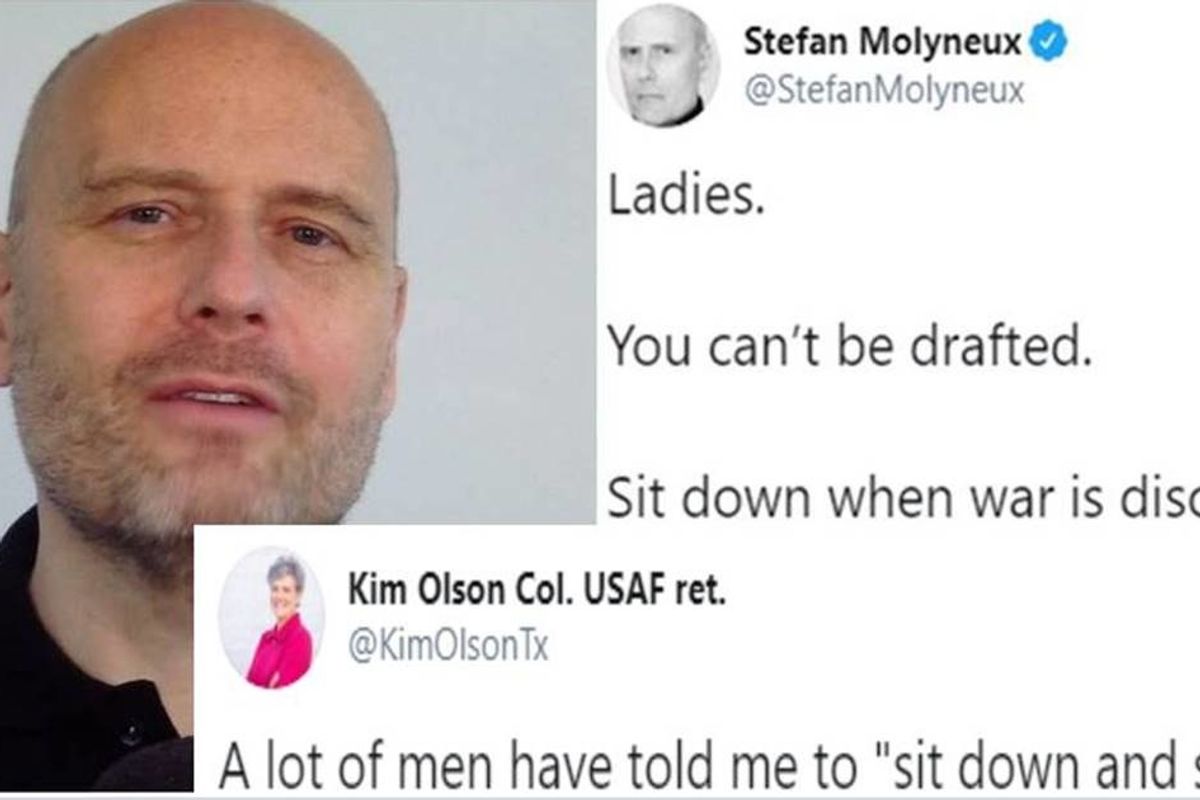 Stefan Molyneux is described by the Southern Poverty Law Center as being part of the "alt-right" and a white nationalist. He has over 650,000 subscribers on YouTube where he often discusses scientific racism and eugenics.

He once said that "blacks are collectively less intelligent" and is an apologist for Apartheid and the Transatlantic slave trade. He believes that non-whites are are racially and genetically inferior and voices support for the men's rights movement.

Molyneux recently got burned on Twitter when he suggested that women should "sit down when war is discussed" because they "can't be drafted."

You can't be drafted.

Sit down when war is discussed.
— Stefan Molyneux (@StefanMolyneux) October 7, 2019

Kim Olson, who served 25 years of active duty and retired as a Colonel, fired back with both barrels.

Sit your ass down, Stefan.

Olson was among the first generation of female military pilots. She commanded troops in combat zones including Iraq, and volunteered three additional years after retirement in the Texas State Guard.

She is currently running for Congress in Texas' District 27.

There are multiple reasons why Molyneux' opinion is pretty damn stupid. He's 53 years old which makes him a few decades past his prime drafting age. He also lives in Canada, a country that hasn't had a draft since the end of World War II.

If he was talking to an American audience, the draft ended in 1973.

Only about 60 of the 195 countries in the world have a draft. Eight of them include women.

It appears as though Molyneux was repeating a major talking point of the men's rights movement: that men throughout history have been treated like cannon fodder. Which is true. But they weren't sent to war by women.

Here some more of the best responses to Molyneux' boneheaded tweet.

You can't give birth.

Boys, you can't be drafted (there is no draft) so sit down when war is discussed.
— MomsThoughts™ (@MomsThoughts) October 9, 2019

Men can't do a lot of things and that's hardly stopped y'all from weighing in.
— Allison Floyd (@AllisonRFloyd) October 10, 2019

Related Articles Around the Web
Trending Topics
THE DAILY GOOD
Start your day with something GOOD.
Trending Stories
The Planet