Meet the Man Behind The Martian

Author Andy Weir speaks with GOOD about science fiction, science fact, and seeing his story on the big screen 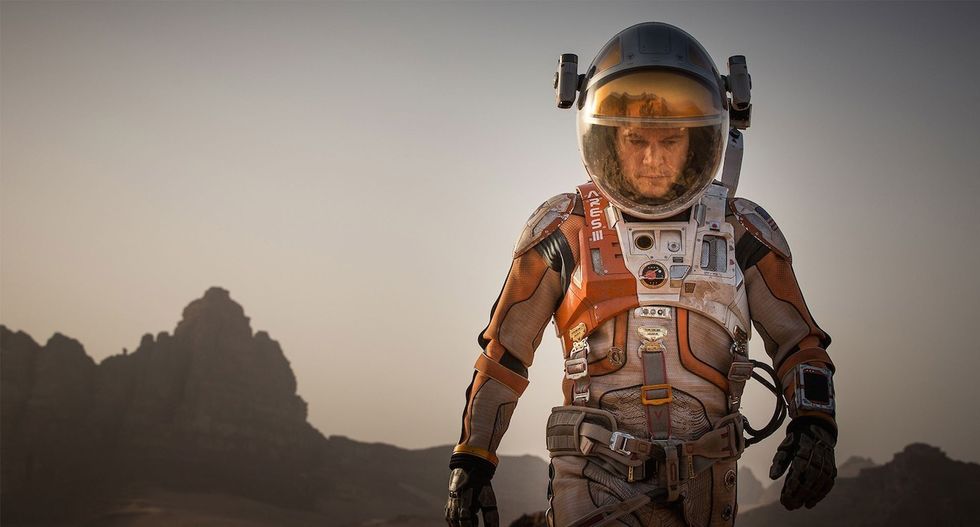 Good science fiction inspires us to imagine distant worlds and “what if” scenarios. Great science fiction fools us into believing—if only briefly—those worlds are real. By that measure, author Andy Weir’s The Martian is great science fiction. The story of a lone astronaut left to fend for himself after his crewmates, thinking he’s been killed, abandon him on the surface of Mars, Weir exhilaratingly blends science fiction with science fact, creating a not-too-distant future that feels convincingly real. As readers, it occasionally becomes necessary to step back and remind ourselves that, in fact, we still have a long, long ways to go before NASA, or any other space agency, will be able to put a human being on another planet.

A computer programmer by training, Andy Weir spent years researching and extrapolating upon the intricacies of interplanetary space travel to tell his story as accurately as possible. And it shows; The Martian is equal parts rollicking adventure and science lesson. The book not only frames complex physics, electrical engineering, and even botany as easily accessible subjects for even the most casually science-minded reader, but also ultimately serves to acclimate us to the concerns that will inevitably be at the heart of any eventual manned mission to Mars.

The Martian, Weir’s first and only novel to date, is, like its titular hero, a survivor, having ascended through multiple publishing iterations: First as free content on Weir’s website, then a 99-cent eBook, and ultimately, in print. Now, after hitting the bookstands in 2011, The Martian is being transformed once again, this time into a big-budget motion picture starring Matt Damon, and helmed by Ridley Scott. The film, which opens on October 2, is already being heralded as one of the best of the year. As the movie industry floods theaters with comic-book heroics and supernatural sequels, The Martian, with its focus on hard science, stands out.

While in Canada for the Toronto International Film Festival premier of The Martian, Weir spoke with GOOD about his optimism for visiting other planets, how to blend science fiction with science fact, and what how he would handle a year on Mars.

At its core, The Martian seems to be optimistic about the technology and people that make space exploration happen. Do you see reasons to feel this kind of optimism about space exploration and scientific discovery in the real world?

I think it’s human nature to be cooperative, and that we’re an inherently good species. I also think the world gets better and better over time. If you don’t believe me, ask yourself this: Would you rather be alive right now or in any previous century?

The story strikes a good balance between science fact and science fiction. What sort of research went into establishing a scientific basis for the technology and methodology described in the book?

I’ve been a lifelong space geek, so I started out with more than a layman’s knowledge of how the space program works. Beyond that, it was just a bunch of Google searches for information and lateral thinking in my spare time.

You ushered you book through multiple iterations, first as free chapters on your personal website, then as a kindle single, and finally as a print edition. How did it feel to hand off the story to a team of filmmakers, and relinquish control of something you’d worked on by yourself for years?

I wasn’t worried. Drew Goddard signed on to write the screenplay, and he loved the book. So he worked hard to keep the feel and events of the book in place. And he consulted me frequently during that process—something he didn’t have to do, he just chose to.

I've seen you advocate in other interviews for more involvement by private companies, such as SpaceX, in space exploration. Why?

I believe the key to humans getting out into space is reducing the cost of getting stuff into orbit. There will be a critical point when technology enables us to send mass into orbit for less than a few hundred dollars per kilogram, and then we’ll have a “space boom.” As soon as it’s possible for a middle-class American to afford a once-in-a-lifetime trip to space, demand for space travel will be effectively infinite, and industry will ramp up to meet it. Eventually, space travel will be like the modern airline industry.

I've read you mention an interest in returning to the moon before we attempt a mission to Mars. What's the thinking there?

The Moon serves as an excellent test bed for eventual Mars exploration technology. Also, we can make fuel there from local resources, which would dramatically reduce the price to get a large ship into a Mars intercept course (because getting stuff off the Moon is a lot easier than getting it off Earth).

You've said that while writing the book, you had no contact with anyone working in any space administration or program. However, since the book's release, you've become something of an ambassador to NASA and for space exploration in general. In what ways has the real NASA surprised or impressed you?

It’s been a dream come true. The main surprise is how calm everything is, even during a crisis.

Say you, Andy Weir, are shipped off to Mars, by yourself, for a one-year stint. You can only bring one music album, one book, and one complete run of a television show. What do you bring?