Bernie Sanders showed up to a Fox News town hall and completely won over the audience.

A moment of unity that completely caught the hosts off guard. 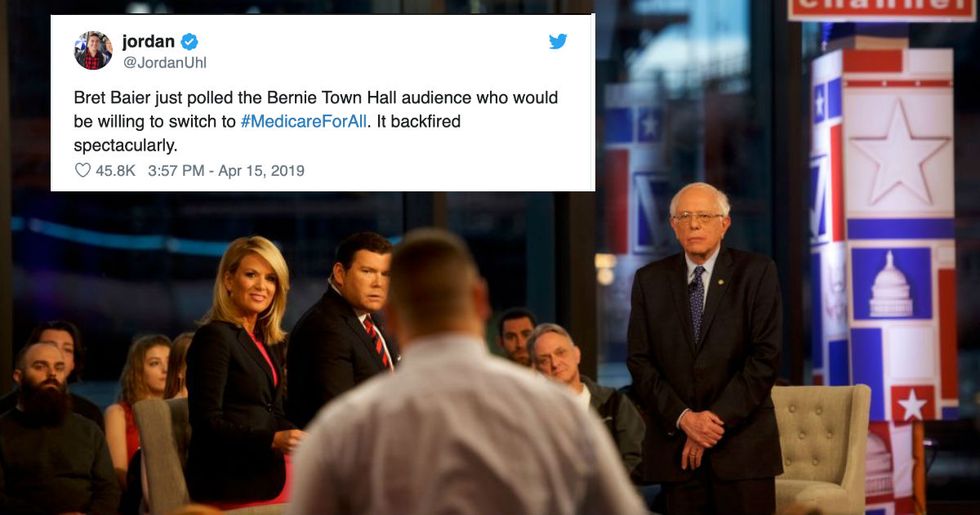 First of all, let’s give credit to Bernie Sanders: Unlike so many other progressives and Democratic lawmakers, he had the confidence to show up to an event hosted by the Fox News Channel.

Secondly, let’s give credit to Fox News: They could have packed the town hall they organized with right-wing critics who would go after Sanders and his health care proposals, no matter what he said. Instead, they filled the room with a diverse set of Americans who had pressing, honest and thoughtful questions for the Vermont senator whose 2020 presidential bid is suddenly leading the field of Democratic contenders.

And when Bernie got into the details of his Medicare-for-all healthcare plan, he absolutely won over the town hall audience.

Bret Baier just polled the Bernie Town Hall audience who would be willing to switch to #MedicareForAll. It backfire… https://t.co/A8bNPM12hR
— jordan (@jordan) 1555369027.0

When Martha was flummoxed by his answers on paying for healthcare he said "don't worry, we'll get through this together" and I loved him so much right then.

If you’ve watched more than one Bernie stump speech, you know he almost never veers off course. His talking points are steady, sound and quintessentially Sanders. So, when it came time to tick off the details of his healthcare plan, he wasn’t caught off guard. That doesn’t mean anyone would like those specific details but Sanders certainly isn’t short on the intellectual heft needed to lay a foundation for his potentially transformational ideas.

And when Fox News host Bret Baier asked attendees to raise their hands in response to whether they’d be willing to shift from their private insurance plans to a Medicare-for-all model, the response was overwhelming: The vast majority of the audience was into Bernie’s plan.

Maybe this proves the central point of Sanders’s campaign rhetoric: that the American people writ large, not just progressive Democrats, really want the government to guarantee them a certain standard of living. Maybe it just proves that Sanders is a good politician who’s skilled at presenting his preferred policies in a way that sounds good to people. Either way, it’s a good illustration of why he’s a 2020 frontrunner.

There may be no greater way to measure the impact of Bernie’s town hall success than the vitriolic response it drew directly from President Trump, who angrily attacked both Sanders and his friends over at Fox:

In fact, Sanders isn’t just “a” frontrunner. At this point, he’s the frontrunner. A new Emerson College poll shows Bernie leading the entire field. He’s now in front of former Vice President Joe Biden, who appears to be slipping in the polls before he even formally announces his potential candidacy. And as the Emerson poll reveals, should Biden decide not to run, Sanders takes the lion share of Biden supporters, further cementing his lead amongst Democrats.

We’re still nearly 10 months away from the Iowa Caucus and many things can change between now and then. But for anyone who thought Sanders 2016 upstart campaign was a blip in the world of politics, it’s now clear that Bernie is here to stay and his ideas are resonating with a significant portion of the American electorate, not just the “socialists” or “Bernie Bros” as was often claimed.