A million students took to the streets demanding action on climate change. Here are 18 of their best signs.

“Yo mama is so polluted, she’s literally dying. Save Mother Nature.” 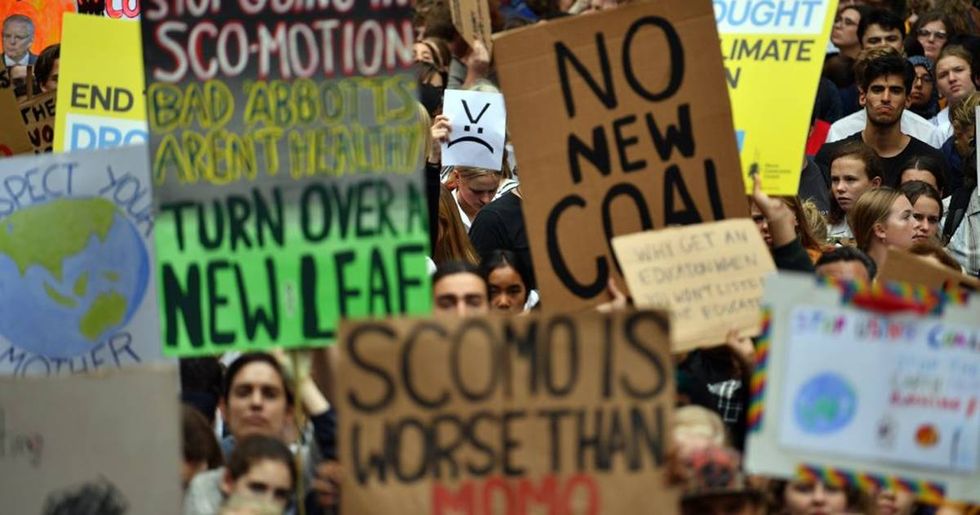 According to a 2018 report from the UN Intergovernmental Panel on Climate Change (IPCC) world leaders only have 11 more years to significantly reduce the production of greenhouse gasses to avoid a climate disaster.

If greenhouses gasses continue to be produced at the current rate, the planet’s temperature will rise an average of 1.5 degrees celsius by 2030, drastically increasing the risk of extreme weather events, including wildfires, floods, food shortages, and drought.

If politicians fail to act, the world’s youth will inherit one of the greatest challenges ever faced by the human race.

To demand action from their elected officials, over one million students took to the streets in 125 countries on March 15 to demand action on climate change.

According to the Youth Climate Strike Website, here are the students' primary demands.


One of the highlights of the march were the creative signs created by the students to call attention to the global crisis. Here are 18 of the best:

One of the more creative signs at the #ClimateStrike#SchoolStrike4Climatepic.twitter.com/sXjXH7VI5X

Even a little Spider-Man is in on the action @9NewsMelbpic.twitter.com/dhlRFm1rvL

“Yo mama is so polluted, she’s literally dying. Save Mother Nature.”#SchoolsStrike4Climate#ClimateStrikepic.twitter.com/YhEq0VsGZh

Massive chants of #StopAdani right now. These kids are using their signs as camouflage in case their school finds out they’re here pic.twitter.com/gW02ki5QiS

This is the loudest and fastest protest march I’ve ever been on! Best signs too #climatestrike#climatemarchpic.twitter.com/0ydD2Qg3im

It’s past time all of us stopped looking the other way, learn from the passion and wisdom of young people and join them in actively organising for a better future.

My response to the strikers: https://t.co/RA8yvPlZBj#ClimateStrikepic.twitter.com/de0Pqv5yE3

COME ON QUEENSLAND, where are ya? #climatestrikepic.twitter.com/6n2l2hJXoS

Some golden signs here at the #schoolstrike4climate#wellingtonpic.twitter.com/KGrUGpWIml

\n
From Your Site Articles