“I definitely think this is a start for this community” 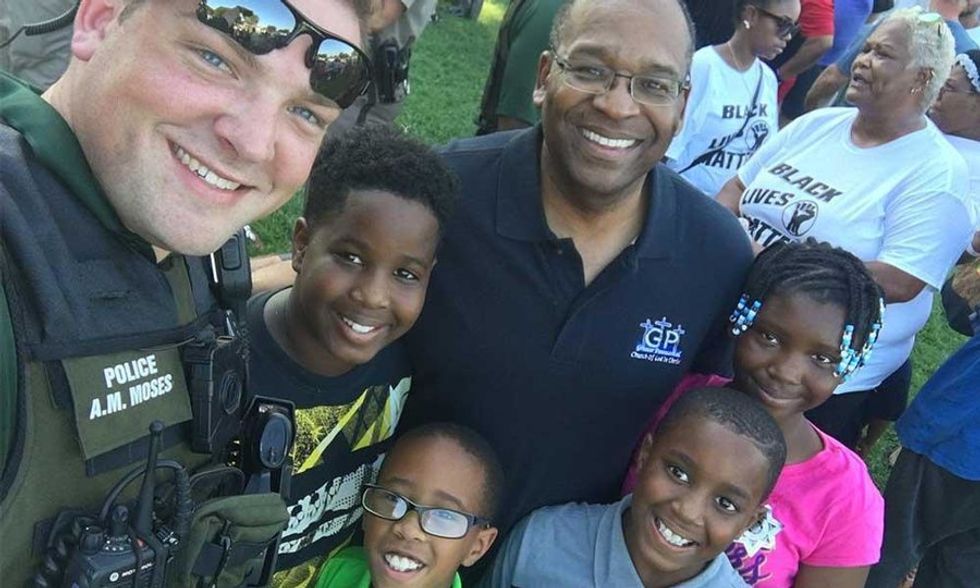 Breaking bread together is surely one of the oldest forms of peacemaking, a way for foes to lay down arms over a common interest. But as tensions simmered between activists and police officers in recent weeks, those feel-good mealtime moments have been hard to come by. In a Pennsylvania diner, a couple refused to be seated near a table of cops. In North Carolina, two officers were allegedly taunted and served intentionally painful chicken wings. Things can look pretty unappetizing.

So how about a little cheery news?

This past weekend a Black Lives Matter protest was scheduled for Wichita, Kansas (as with many other parts of the U.S.). Shortly before it happened, Wichita Police Chief Gordon Ramsay had a sit down with A.J. Bohannon, a local activist leader, and the two hashed out a very different kind of plan, according to local affiliate KMUW: a free cookout for all.

The big event went down on Sunday night, after word came in about the murders of three Baton Rouge law officers. Bohannon said that the violence made the event even more vital to his community.

"We can get on the same page and say those things that are in Baton Rouge don't trickle over into Wichita, Kansas,” he said to KMUW. “My heart goes out to the families, those officers in Baton Rouge, but I think the fact that that did happen makes this event more meaningful. I definitely think this is a start for this community, and I definitely want to keep it going.”

At the event, dubbed the First Steps Cookout, the police ended up cooking more than 2,000 hamburgers and 2,000 hot dogs. Using the hashtag #ThatsMyWichita, hundreds of images of officers, activists, elected officials, and ordinary civilians were shown dancing, playing basketball and chowing down.

Ramsay also had some hopeful words for the Wichita Eagle regarding his city’s police department: “Loud and clear I have zero tolerance for racial profiling or racial bias,” he said. "If you feel mistreated, I want to know about it."