Bridezilla enforces ugly $1,000 dress code based on weight. That's not even the worst part.

This may be the most insane bridezilla story ever told. 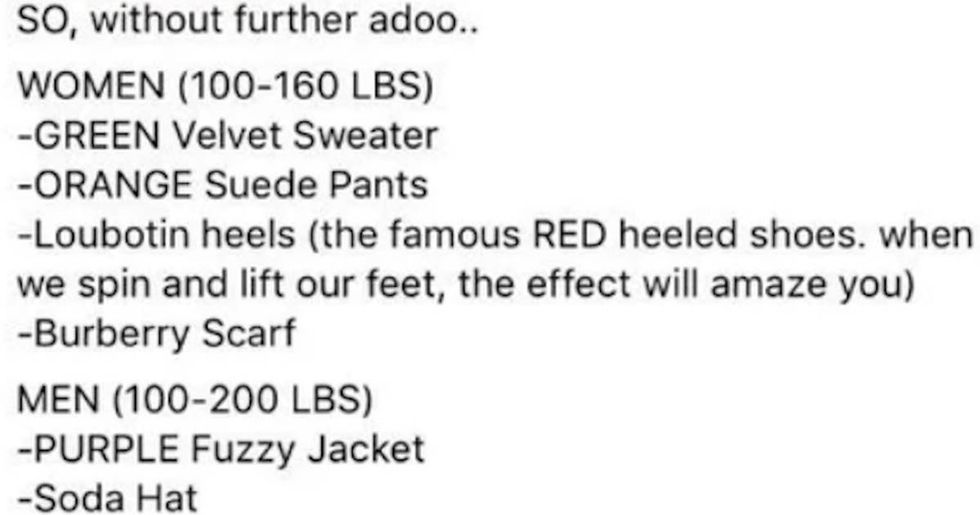 Whenever I think I’ve read or witnessed the most extreme wedding stipulations, another unhinged bride pops out of the abyss to remind us all that life is limitless — a true hell of your own making.

One bride-to-be’s dystopian wedding vision has taken the internet by storm due to its particularly nauseating combination of fatphobia and classism.

Fatphobia AND classism, can you even name a worse duo?!

To create the desired visual effect at her Hawaii wedding, this bride from hell has created a DRESS CODE for all of her guests. But the horror doesn’t stop there — the dress code is supremely ugly and includes orange suede (this is a hate crime), green f*cking sweaters (in HAWAII), glow sticks (because apparently it’s Coachella) AND GREEN FUZZY JACKETS!!! Pardon the caps lock, it just leaped out of my spirit as I dry heaved.

To make matters even grosser, the bride has delineated what people should wear based on what they weigh, and she has specifically said that women over 160 pounds must wear all black, and men over 200 pounds must wear CAMOUFLAGE. I’m not sure if this is supposed to fade them out, or shame them, but at least they dodged a bullet with the green fuzzy attire.

The bride also requires everyone drop at least 1k on their outfit for her puke-colored 24k-themed wedding.

Just, read this for yourself:

q_q_o_o_b_b really captured the essence of the color scheme.

“Is the ‘incredible visual effect’ the bride is trying to create with a green, orange, purple, black, red and camo color scheme a seizure?”

Androsnian is having a hard time believing anyone will show up to the wedding at all.

“I get this feeling this might be one of those weddings where everyone cancels when she tries to double check a month or so before the wedding, and then we’ll get the over the top drama post about how all her friends are a bunch of backstabbers. Can’t wait.”

SharkSpew lamented just how uncomfortable these outfits would be in Hawaii, and also, marveled that the bride expects everyone to learn a synchronized dance?!

“So, I’ve never been, but I’m going to go out on a limb and say the idea of having to wear sweaters/suede/pants/velvet/hats/jackets no matter what time of year you’re in Hawaii is going to be a disgusting sweaty mess. Especially if I'’ expected to ‘dance’.”

RatherBeYachting even made a paint mock-up of the awful outfits.

Apparently, the woman caught wind of her screenshotted infamy, because she posted an impassioned response to all of the criticism. The response itself feels even more unreal, and there is a deep abiding part of me that wonders and hopes that this is all just an elaborate joke!?

Upon finding out someone betrayed her by making fun of her original post, the bride has offered to allow people to forgo the outfits and choreographed dance (if they wish), so long as they agree to clean up after the wedding or throw cash towards the honeymoon.

She’s also decided to throw a POLYGRAPH PARTY where she will test her friends to find the mole. As a form of emotional blackmail, the bride also wrote that anyone who decides not to attend the polygraph party is a suspect.

Reddit user CrushMyCamel posted the second screenshot, showing the bride’s response to the internet backlash, and shared they don’t know her personally but are connected by friends.

“I don’t know this lunatic or I would 100% go just for all of you, but I do know people who know her so hopefully there is an update on it soon. I hate that this wedding is still over a year away and we have to wait for that lucid nightmare for so long.”

avocadonoir pointed out the glaringly obvious holes in the bride’s defense of her spirituality.

“I love how she equates her spiritual healing profession (which could have quotation marks around it, to be honest) with Indian culture.I also love that they bought a $99 polygraph test from Amazon. And will assume anyone who doesn’t come or doesn’t want to come to their soon-to-be infamous Polygraph Party is guilty of betraying them.

But she won’t retaliate. That’s for non-spiritual people who are unenlightened. She’ll just cut you out of her life and talk mad shit about you after doing so. Like someone at peace with the universe.”

The dedicated informant CrushMyCamel soon updated the thread when a (justifiably) angry guest called the bride out on her BS.

CrushMyCamel has dutifully promised to post more updates on this thread if and when anyone else responds to this unhinged bride. I, for one, will be glued to my screen in anticipation.