This is the Republican who shamelessly kicked out two Parkland shooting victim parents from a congressional hearing on gun violence. 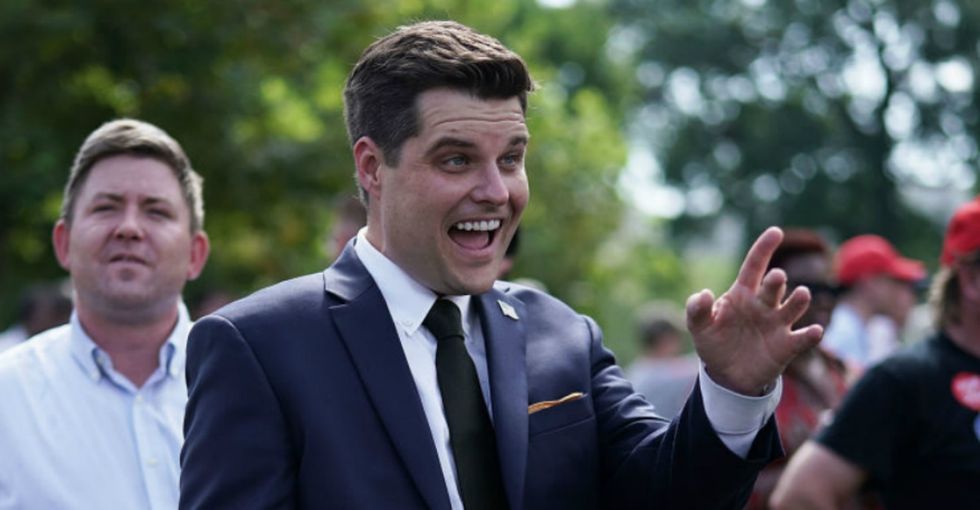 The House Judiciary Committee held a hearing on gun violence for the first time in nearly eight years and it ended in embarrassing fashion for the leading Republican. The committee room was filled with concerned citizens, some of which arrived three hours before the hearing’s start. But the heated topic got out of control when fathers of two Parkland shooting victims went head to head with a pro-Trump congressman.

During the hearing, Rep. Matt Gaetz (R, Florida) stated instances when gun violence was committed by undocumented immigrants. He then pushed for the border wall, claiming without evidence that the wall would curb such violence.

"I hope we do not forget the pain, and anguish, and sense of loss felt by those all over the country who have been the victims of violence at the hands of illegal aliens," he said. "[Firearms background check legislation] would not have stopped many of the circumstances I raised, but a wall, a barrier on the Southern border may have, and that's what we're fighting for.” Gaetz is a supporter of President Trump and his border wall.

Manuel Oliver and Fred Guttenberg, fathers of two Parkland shooting victims, protested Gaetz’s statements. "Manny told Gaetz his comments were not true, and I said our loved ones were killed by an American male,” Guttenberg later told NPR.

Comments from the public are forbidden during congressional hearings, and the two were given a warning. Gaetz later pushed for their removal, citing their interruptions. "I'd observe three interruptions of my time by the same individual, and the chair is not exercising his discretion to remove that individual," Gaetz said as he pointed at Oliver and Guttenberg.

Gaetz later said he was unaware the disruptors were fathers of Parkland victims. However, he also said that he still would have acted the same way. “I don't think anybody, regardless of tragic circumstances, can expect to come to a congressional hearing and take it over with a series of interruptions,” Gaetz said.

While Oliver and Guttenberg weren’t permitted to speak during the congressional hearing, others involved in Parkland were able to make their voices heard. Parkland survivor Aalayah Eastmond testified before the committee. “Assault weapons and high-capacity ammunition magazines belong on the battlefield — not in our communities. My classmates and I have seen firsthand how uniquely lethal these weapons are,” said Eastmond. "I implore you to pass legislation that would make us all safer. Today in America, anyone can go on the Internet, answer an ad or go to a gun show and buy a gun with no background check required. This makes absolutely no sense.”

Now that Democrats have gained control of the House, they’re making gun control legislation a priority. New legislation expanding the scope of background checks on gun sales and gun transfers has been introduced into the House and is co-sponsored by a bipartisan group of 230 lawmakers. The bill, while likely to get through the House, is expected to experience setbacks in the Senate.