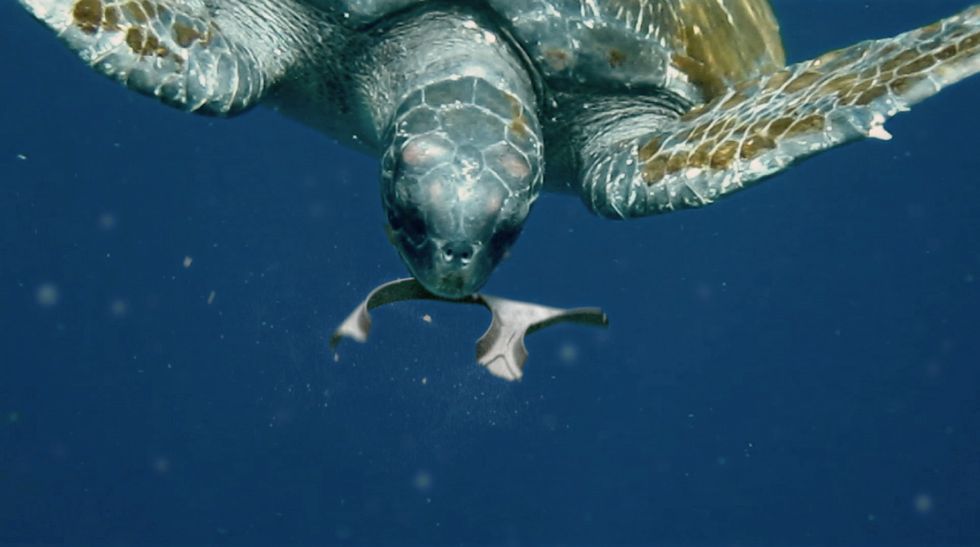 While it’s still a few months away from large-scale production, response to the technology has been, shall we say, enthusiastic? A promotional video was released by Florida’s Saltwater Brewery less than a week ago and already has more than 9 million views on Facebook.

“We've already started to get orders from craft breweries. They want to know how quickly we can ramp up to bring this product to market,” says We Believers partner Marco Vega, one of the brains behind the product. “The response has been phenomenal.”

Short of a lame aside from a beer bro to hot blonde, and what I’m pretty sure are CGI fish, the video is pretty nifty. After all, who doesn’t want to take credit for saving marine wildlife while simultaneously drinking beer?

While their original concept was packaging made out of seaweed, the development team quickly scrapped that idea, says Vega. “Why would we be taking seaweed out of the sea? That was not going to be very sustainable. That would have been, actually, really dumb," he says. (It should be noted, harvesting seaweed can be very sustainable, if done right.)

Instead, the team’s engineers looked to work already being done on biodegradable sugar cane packaging, and started testing similar materials made from barley and wheat leftover from the brewing process. In the long term, ring manufacturing facilities could be nestled between craft beer hubs across North America, and produce each unit for about 15 and 20 cents, which is equivalent to other eco-friendly versions out there now.

But before you jump headfirst onto the ringwagon, there is one catch. According to NOAA veterinarian and sea turtle expert Brian Stacy, these new rings are being billed as “edible” but aren’t quite fish food—they haven’t been tested on animals yet.

“Whenever anybody takes on reducing plastic pollution and finding biodegradable solutions, that's a good thing, and I really applaud them for doing that,” says Stacy, who, as a heartbreaking part of his job, frequently finds dead turtles full of tiny pieces of plastic. "I still would want to know more about the product before I said this was fine for a turtle to eat," he says. “They're a protected species.”

Lexie Beach, communication coordinator at the Sea Turtle Conservancy, agrees, pointing out that just because the material is technically edible doesn’t mean turtles, fish or other wildlife should or will eat it. “Marine debris is one of the biggest killers of sea turtles especially. Even the tiniest pieces of plastic can clog up their stomachs, especially if they’re hatchlings, and that can be fatal,” she says.

Beach is speaking here from an abundance of caution, however. “Just as long as it’s not plastic rings that are going to stay in the water for hundreds of thousands of years,” she concedes. “We’re all for the technology.”

At the end of the day, Saltwater Brewery is still considering this a value-added accessory to their bread-and-butter product. (That’s beer.) “We want to create quality beer, but any way we can promote educational awareness of the ocean environment and making sure that it's healthy, that's what we want to do,” says Chris Gove, president of Saltwater Brewery, which already uses an alternative—though still plastic—to the damaging plastic rings.

Since the video launched, Gove’s phone has been ringing off the hook with calls from ocean lovers, but also large competitors who want in on the technology. This, for Vega, is the future of advertising and industrial design.

“This is about having the creative community and the business community, along with engineers, create a better future,” he says. “The network is there, the ideas are there. This is the time when these things can become real.”

We’ll drink to that.