Ellen DeGeneres Calls Out An Audience Member For Theft

It was a total violation of the honor system 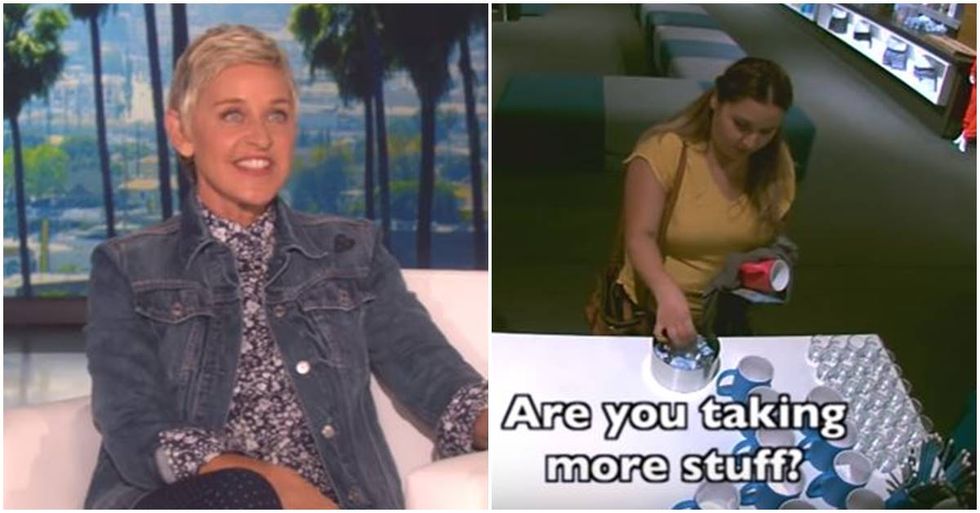 The “honor system” would just be called the “system” if it weren’t for the one person who always takes advantage of another’s generosity. Last week, on “The Ellen DeGeneres Show,” an audience member violated the sacred code and DeGeneres was forced to call her out on national television. Although, from the way the bit was set up, it appears as if the producers wanted someone to get caught.

Before the show’s taping, audience members were treated to an assortment of branded keychains, hats, coffee mugs, and shirts, but there was one rule: You could only take one item. Subsequent items would have to be purchased from the gift shop. Hidden cameras were turned on to see if anyone violated the rules. Most audience members were honest and only took one item ... and then there was Nancy.

When presented with all of that sweet “Ellen” swag, Nancy had zero self-control and grabbed a cup, keychain, shirt, and shot glass. When asked by a friend if she was taking extra she told her to “shut up.” Later, Nancy returned one stolen item and switched it out for a hat. Little did she know she was caught red-handed on camera.

When the show began, DeGeneres rewarded one audience member for her honesty with a free hat. But then the camera turned to Nancy. “My sister couldn’t come, so that was her souvenir,” she confessed. But Ellen wasn’t happy and called her out. “I like that you liked the products so much that you wanted to bring one back for your sister,” she said. Nancy reacted by disciplining herself with a slap on the hand. “You think nobody’s watching you, and just need to be a good person just because you want to be a good person,” DeGeneres said. Then Nancy was banished her to the show’s jail—a large steel chair in the corner of the studio.