Why We March: Protestors Speak Up About Why They’re Standing Up Against Family Separation

Around 70,000 people attended the Families Belong Together march in L.A. 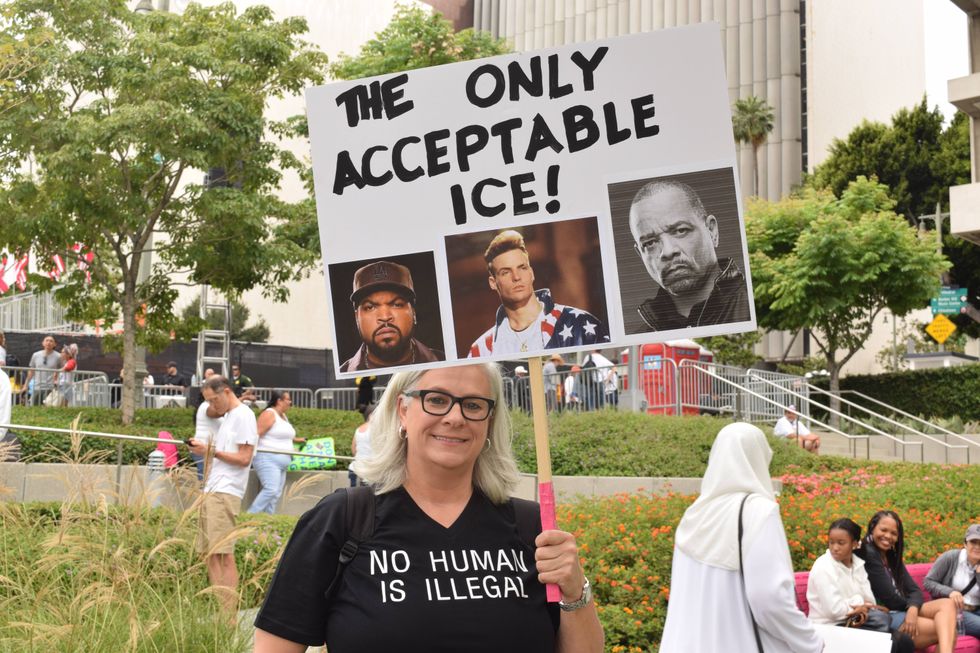 Less than two months ago, the Trump administration announced it would separate minor children from their parents at the border as part of its new “ zero tolerance” policy on undocumented immigration. This controversy has prompted such a public outcry that President Donald Trump walked back the family separation policy with an executive order. Since then, only around 500 families have been reunited.

On Saturday, June 30, people protested in more than 600 marches against Trump’s family separation policy. The Washington, D.C., march featured “Orange Is the New Black” actress Diane Guerrero talking about being separated from her parents after they were deported to Colombia, and progressive congressional candidate Alexandra Ocasio-Cortez attended the New York march. The Los Angeles march featured John Legend performing a cover of Marvin Gaye’s “What’s Going On?” as well as speeches from California gubernatorial candidate Gavin Newsom and firebrand Congresswoman Maxine Waters.

[quote position="full" is_quote="true"]Immigrants don’t come here to take from us; they add to what makes America special.[/quote]

“We are here along with all the other protesters across the country to say to Donald Trump, and his cabinet, ‘We are not afraid of you, you should be ashamed, we want our children connected back to their parents,’” Waters said.

Chrissy Teigen and her infant son joined protestors at the Los Angeles march. She also gave a speech offering support for immigrants like her mother.

“I’m incredibly proud to be the daughter of an immigrant. My mother grew up in a very small village in Thailand, and she never lets me forget it,” Teigen said. “Too many people demonize immigrants like they’re stealing something from the people born here. Immigrants don’t come here to take from us; they add to what makes America special.”

Around 70,000 people attended the Families Belong Together march in L.A., with many attendees drawing inspiration from Melania Trump’s jacket bearing the text “I really don’t care. Do u?” that she wore when she visited an immigration detention center for children last week. Many marchers brought signs, umbrellas, and jackets with some variation of the message “I really do care.” Marchers were particularly motivated to come out after seeing photos of children in cages at detention centers.

GOOD spoke with eight marchers about why they are mobilizing for action. (Comments may be condensed and edited.)

“I’m marching against the inhumane policies that have been put in place by Trump and by Sessions. And to let people in the government and the world know that there are plenty of people against these policies, and we are voters, and we’re going to make changes for the better.

I’m opposed to the fact that they are detaining families merely looking for a better life and trying to escape danger from their home country. I’m opposed to the present administration mistreating vulnerable people.

The story behind the sign is that we have fallen in stature in the eyes of the world, in the eyes of people who stand for human rights. We’re probably the laughingstock of the world. I want people to know that, and I wish the administration could see this sign.”

He’s gone too far. It’s just too outrageous. As John Lewis said this morning, ‘We all came on different ships. And we’re all in the same ship now.’”

“I’m undocumented, and I’m on DACA. I feel like I have to come to marches like this and fight and try to stop this.

I hope this march opens people’s eyes. ... I hope this puts a face to what’s going on and shows that a lot of people are affected by this. It’s not OK in any way. Just because they’re not from here, I don’t think that’s a reason not to help others. It doesn’t really define who we are just because we were born in different places.

America is a nation of immigrants. We were known as the melting pot, and now they’re trying to change that. I don’t agree with that.”

“I’m marching because I am appalled at the ignorance that the American population has. I’m overwhelmed when I see the amount of people who believe this man’s lies, are OK with his racism and sexism, and are OK with the way he’s making money with all his various businesses. It’s stunning to me. I have a gay son and a bisexual son. I’ve been thinking about a lot of this idea of, you know, how Republicans talk about turning people in terrorists? The quickest way to turn someone into a terrorist is to mess with their child.

I couldn’t stay home. I felt like if I saw someone else downtown and I wasn’t among them, I would’ve been nauseous.

My dad was a Marine. I grew up on military bases. People say, ‘Oh, this is not America.’ It is. And it has been for a while. We had a cross burning in my front yard when I was in junior high school. The idea that something like that can happen right now to some other kid in junior high just makes me sick. So that’s why I’m here. I couldn’t stay home.

[quote position="full" is_quote="true"]I feel like we’re living in a cross between a funhouse mirror and a horror flick.[/quote]

Everything from the tapes of the babies crying and talking to their parents and the mothers barely holding it together and getting their children to be calm. It’s just the most harrowing thing I’ve heard.

I actually just relocated back to L.A. after living in Philadelphia for 20 years. And I can’t imagine most Philadelphians not being up and on fire right now. I think it’s just about sensible, loving Americans. I’m not even Christian, but the idea of a Christian being anti-immigrant is insane. I think Jesus and them — I think they were immigrants. [laughs] So I think there’s a lot of hypocrisy and stupidity. It’s just the sickest thing ever. I feel like we’re living in a cross between a funhouse mirror and a horror flick.”

“My friends and I decided to come out today to support immigrants and families who have been detained at the border because it’s illegal what the president’s doing. The Constitution means nothing anymore. Everybody this country is an immigrant or is from an immigrant. We’re a nation of immigrants. Modern-day immigrants coming over the border should be supported too.

I think the best thing that can come out of today is just more awareness. You saw the kids being detained at the border, right? It wasn’t until people saw that and spoke out that the president backtracked. Maybe he’ll see that citizens are pissed off about this. These people work for us. We don’t work for them. But they’re doing things in their own interest instead of what the people want. We want to send a message to them.”

“A couple years ago, I wasn’t paying attention to politics at all. I assumed that politics was tax structure and school reform and the basics: All people are created equal, ‘Give us your tired, your poor, your huddled masses,’ I thought we’d kind of agreed on that. And then I found myself cornered into a political conversation by an extreme conservative that I know who just start going on a racist rant. And then with the upcoming election, I started putting everything together.

I never thought we’d be so far as to have children in cages, where people will still support this or excuse it or find some way to just be comfortable with it and still tell themselves that they’re on the right side of things. And it worries me that the most extreme thing to happen during this administration still hasn’t happened. And I’m here because there’s so much apathy and there’s so much evil that it’s not OK.

Part of the reason why I’m here is because as a straight white male who is not Muslim, Jewish, or here illegally, I didn’t see what people were going through. And now that I see what people have been going through this whole time, while I assumed that everything was fine, there’s a certain level of guilt. I’m here so that way, maybe a crowd like this, over and over again – this is my 14th march since the inauguration – maybe these crowds will make a difference. But no matter what ends up happening, I wasn’t at home today.”

“I’m Mexican, and there isn’t really any real reason to do this, to take kids away from their family. It’s something we need to stand up and talk about. I hope they realize these are kids, they’re tiny. This is going to affect them a lot down the road.

It’s still Pride month, we should all be unified one way or the other, for the same causes. So I thought it was a nice thing to do.”