It’s powered by the sun and is insanely majestic 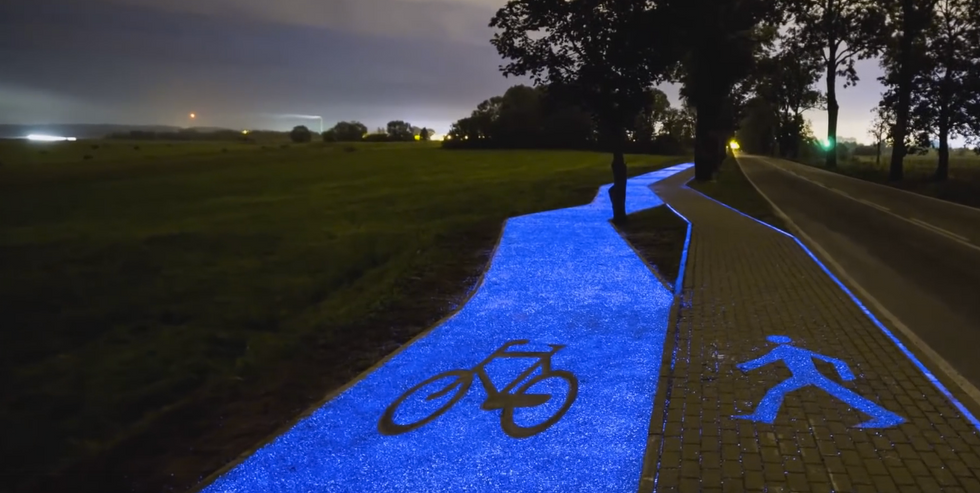 If you haven’t already heard, Poland is the new destination for ultimate bike riding. Since September 23, the small Polish town of Lidzbark Warminski has been home to a bike path that glows electric neon blue once night falls, the Huffington Post reports. The futuristic path, designed by engineering company TPA Sp. z o.o, leads to Wielochowskie Lake and contains “luminophore” particles that capture solar power during the day and release it in the form of light at night. The Polish newspaper Gazeta Olsztyńska reports that the bright blue glow can last up to 10 hours.

This path, while infinitely cool and eco-friendly, provides plenty of illumination for nighttime cyclists and makes the path safer for both bike riders and pedestrians. TPA President and CEO Igor Ruttmar addressed this point in an interview with ABC News, saying, “We hope that the glowing bicycle path will help prevent bicycle and pedestrian accidents at night. It’s a problem here in Poland, especially in the areas farther from the cities that are darker and more invisible in the night.”

Ruttmar also explained that he and the town hope to implement more glow-in-the-dark bike paths since this first one only measures at 328 feet long. For now, he says, they’ll wait to see how it fares during the winter months and holds up to heavy bike traffic. Let’s hope it performs exceedingly well as avid cyclists and nighttime strollers alike are surely chomping at the bit to get their wheels and feet on one of these majestic trails.