“I had to struggle to make it. This is mind-boggling. This is wonderful.” 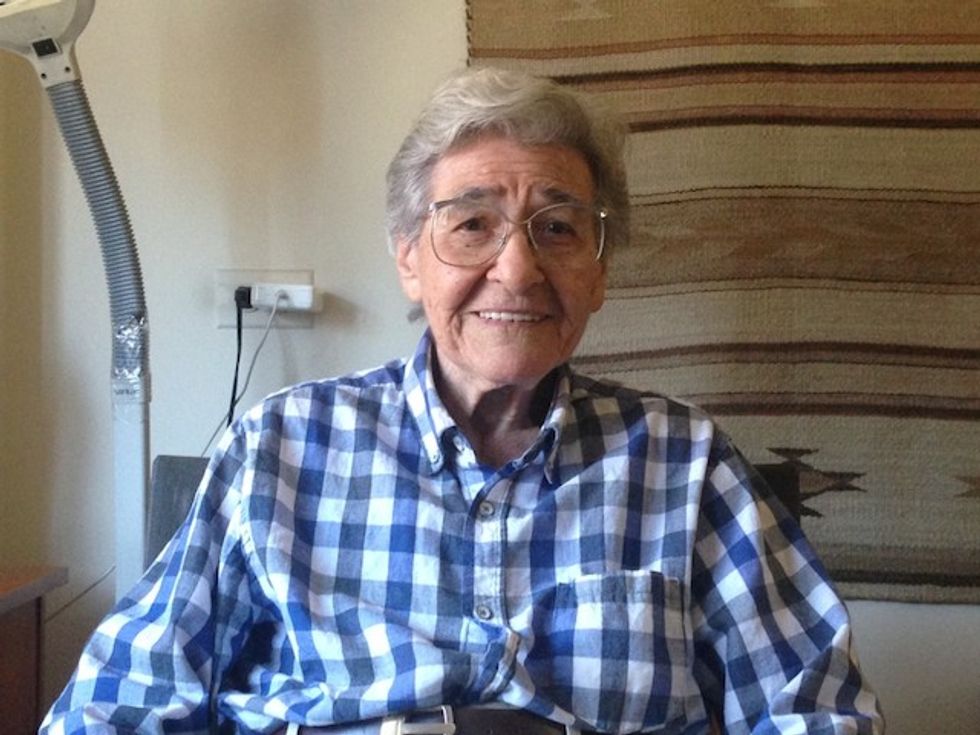 Image via the author

Jerre Kalbas is one of the oldest living lesbians in New York. While so many young gay people consider women like Ellen and Wanda Sykes as household names, Jerre grew up in a time when being gay wasn’t something you ever celebrated with a parade—it was something you hid inside the confines of an underground bar. So when I called Jerre shortly after the Supreme Court made its historic decision, and asked if she ever thought gay marriage would pass in the United States, she had exactly this to tell me:

She added: “I didn’t even think gay would be recognized. This, to me, I can’t even believe it. It’s just so fantastic.”

Jerre grew up in a different era—actually, in many different eras—where gay marriage simply wasn’t a political issue, because gay people weren’t quite considered people. “Nothing was said,” Jerre told me, “You just didn’t talk about it.” While she remembers having feelings for women as early as the age of six, it would be years before she had the words and labels to identify the impressions as gay (“I didn’t know what I was doing!” she said). Still, that didn’t stop her from going out to New York’s underground bars to meet other young lesbians to date and befriend. While there were lesbian bars and gay men’s bars, sometimes, gay men and women would go to a venue together simply to avoid harassment from the police. “If there was a police raid, we would start dancing together, so everyone would think we were straight,” she told me.

But it wasn’t just her sexuality that Jerre had to watch—it was her gender expression as well. During high school, Jerre wore a tie instead of a scarf, which prompted one anxious mother to tell her daughter to, “stay away from me.” At the time, Jerre was confused. “I didn’t know there was anything wrong with me. I didn’t know anything was wrong until people pointed it out.”

And it wasn’t just high school, either—Jerre was always “tomboyish,” and grew up before World War II, when women were expected to wear skirts. So because Jerre couldn’t wear pants, she did the next best thing: “I wore skirts, with a man’s shirt, and a really short haircut. I didn’t want to use a purse, so I carried around a paper bag with cigarettes and my wallet.” As much as she tried to blend in, she was still subject to harassment in the streets: “Guys in the street, they would shout ‘Dyke’ at me … I still hate that word.”

But Jerre persisted, because she is what scientists would call, “a badass.” She became a cook, and a silversmith, and ran her very own mechanical shop. She made friends and lovers and even more friends, and at 97—97—still flies around New York by bus. She’s an active member of SAGE, a nonprofit serving New York’s best LGBTQ elders, and a reader of the New York Times (“Did you see the cover of the Times this morning? Everything’s gay!!”). And while she has no plans to get married anytime in the immediate future, when I spoke with her this morning she had this to add:

“I had to struggle to make it. This is mind-boggling. This is wonderful … Did you see the White House in all the colors … I never thought it would be that way.”

Jerre is going out tonight, and tomorrow she’ll be celebrating the Pride she fought to build for 8.8 million people.