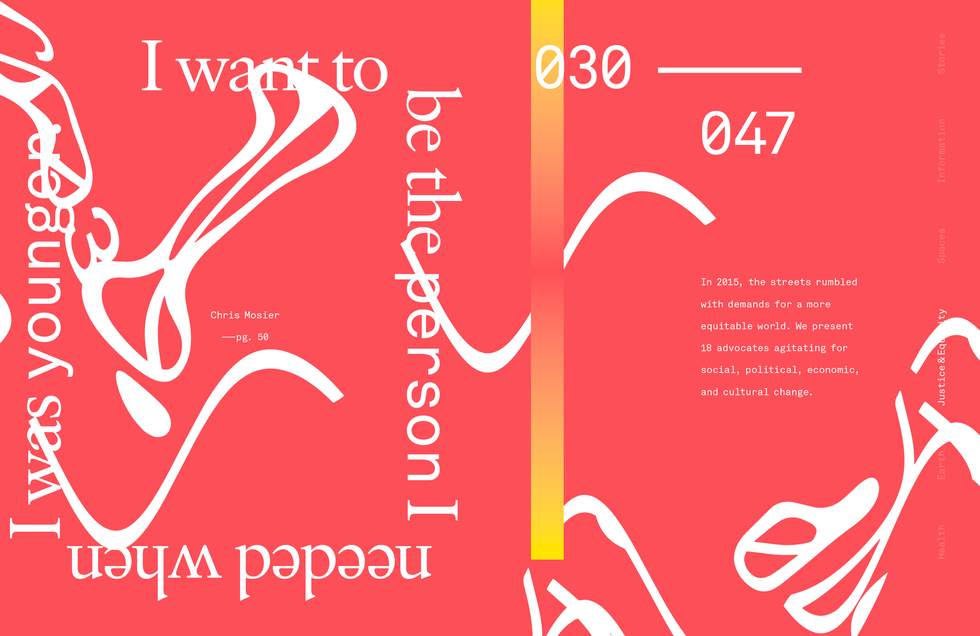 Each year, GOOD celebrates 100 people from around the globe who are improving our world in creative and innovative ways—advocates, inventors, educators, creatives, business leaders and more who are speaking up, building things, campaigning for change, and ultimately refusing to accept the status quo.

After founding Long Street Coffee last summer out of a converted garage in Melbourne, Jane Marx and her husband, Francois, turned their café into a platform for creating awareness of Australia’s severe restrictions on refugee rights, employing refugees and providing paid, six-month barista trainee-ships to asylum seekers.

Rising sea levels threaten the existence of Ioane Teitiota’s home country of Kiribati—a low-lying island chain in the Pacific—so he sought refuge in New Zealand, campaigning to become the first climate change refugee. After a four-year legal battle, Teitiota was deported, but not before raising international awareness of Kiribati’s plight and the effect of climate change as its own form of persecution.

At just 27 years old, Nafisa Kaptownwala is the founder of Lorde Inc., the first modeling agency whose entire roster boasts models of color—many of whom were recruited off of Instagram and on the street. Though only launched in 2013, Lorde has already expanded from its London base to Toronto and New York City, knocking at mainstream fashion’s door to remind the industry that a big, wide world of diverse beauty exists out there.

When Chris Mosier earned a spot on Team USA’s sprint duathlon squad for the 2016 World Championship, he became the first openly transgender athlete to make a U.S. national team aligned with his gender identity. As founder of TransAthlete.com and executive director of GO! Athletes, Mosier consults with sports leagues on trans inclusivity and creates bias response protocols informed in part by his personal experiences with discrimination. This year, Mosier saw another victory with the International Olympic Committee lifting its policy requiring that transgender athletes complete reassignment surgery in order to compete.

Before Emma Watson, there was Phumzile Mlambo-Ngcuka. The United Nations Under-Secretary- General and Executive Director of UN Women is the mastermind behind the HeForShe campaign, which encourages men to be more proactive in achieving gender equality. Most recently, Mlambo-Ngcuka advocated for climate change solutions in the Paris Agreement that address the disproportionate impact environmental change has on women and girls.

When Hari Nef signed to IMG Models last May, she became the first transgender model on the top agency’s U.S. roster. Since then, Nef has walked in New York Fashion Week, been featured in Vogue, and visited the White House as part of its Champions of Change event honoring LGBT artists. The Tumblr favorite has also jumped into writing and acting, appearing on the second season of Amazon’s Transparent.

In September 2014, President Obama named Megan Smith chief technical officer of the United States, making her the first woman to hold the post. A former Google executive and veteran of Silicon Valley, she helped found the Malala Fund in 2012 specifically for Nobel Laureate Malala Yousafzai’s work in girls’ education and empowerment, and serves on the board of Vital Voices, a nonprofit that works with women leaders in economics, politics, and human rights.

Jose Manuel Moller’s company, Algramo, buys essential food goods in bulk to distribute affordably through vending machines on the outskirts of Chilean and Colombian cities, where local stores often charge up to 40 percent more than in central areas. The service is now expanding to Mexico.

Jody Wilson-Raybould Raises Her Voice for the Indigenous

Jody Wilson-Raybould was sworn in as Canada’s minister of justice and attorney general this past November, making her the first indigenous person to hold the office—not to mention the country’s first liberal minister of justice in a decade. One of her first actions in office was to establish a national framework to combat violence against indigenous women.