This NFL player was stuck in the snow trying to get to a playoff game when a homeless man came to his aid.

Both men said their interaction led to “life-changing experiences.” 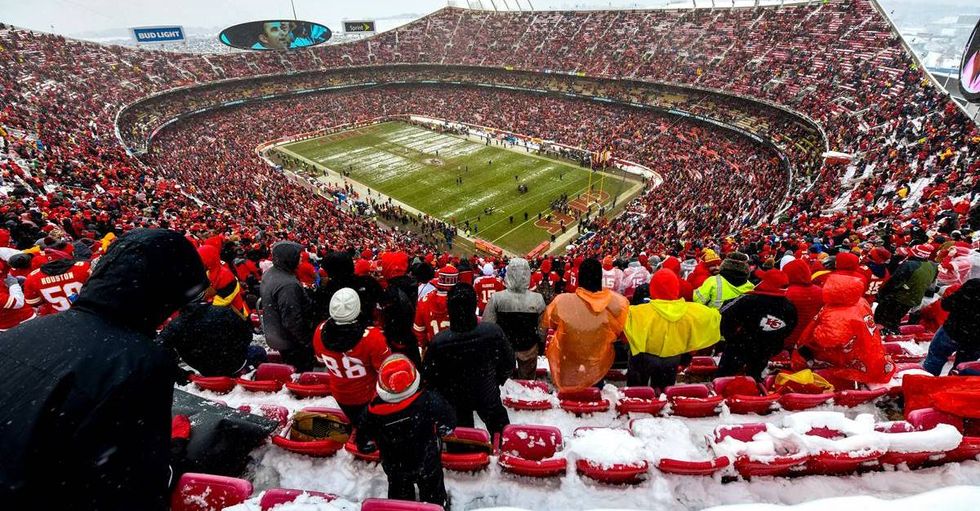 Over seven inches of snow fell on Kansas City, Missouri between 7am and the 1:35pm kickoff for the Chiefs versus Indianapolis Colts AFC divisional playoff game last Saturday.

While cold temperatures made for tough conditions on the field, it was a problem before the game as well. Chiefs offensive guard Jeff Allen got stuck in the snow on Highway 40 en route to Arrowhead Stadium and feared he might not make it to the locker room before kickoff.

Dave Cochran saw the stopped 2019 BMW on the highway and asked if Allen needed help. “I rolled down my window and I asked them if they needed help. They said, ‘Yeah! We're trying to get to the game,’” Dave told CBS affiliate KCTV.

Cochran had no idea Allen was a player, he thought he was a fan.

After the game, which the Chiefs won 31-13, Allen asked his Twitter followers if they could locate the man he knew only as Dave. Allen wanted to reward him with tickets to the next week’s AFC title match.

My car got stuck in the snow before the game & a nice guy named Dave help pull me out without knowing I was a player. I want to give him tickets to the AFC championship game for helping but don’t have a way to contact him. He drove a 97 or 98 Black Suburban. Pls RT #ChiefsKingdom

Steve Dial, a reporter for 41 Action news in Kansas City, was able to locate Cochran and discovered he lives out of the truck he used to help Allen.

This the Dave who helped @Chiefs player @JeffAllen71 when his car was stuck in the snow before the game. Dave is also homeless and lives in his car. The story tonight and how Jeff is giving him an AFC championship game experience he will never forget. @41actionnews#letsrollpic.twitter.com/Hb120B4FS7

Update: Despite the recent influx in people changing their name to Dave in the KC area lol, I was actually able to track down the Dave that helped me thanks to the power of social media and #ChiefsKindgom. Thanks for your kindness https://t.co/e4OkEg6AAw

After hearing about Cochran’s heroic deed, Justin Manford from Manhattan, Kansas set up a GoFundMe page with a goal of $10,000 to give Cochran “two life changing experiences.” The campaign has already raised over $9,400 to help Cochran get back on his feet.