Art+Feminism Wikipedia Edit-a-thon gives women artists their digital due this weekend at the MoMA. 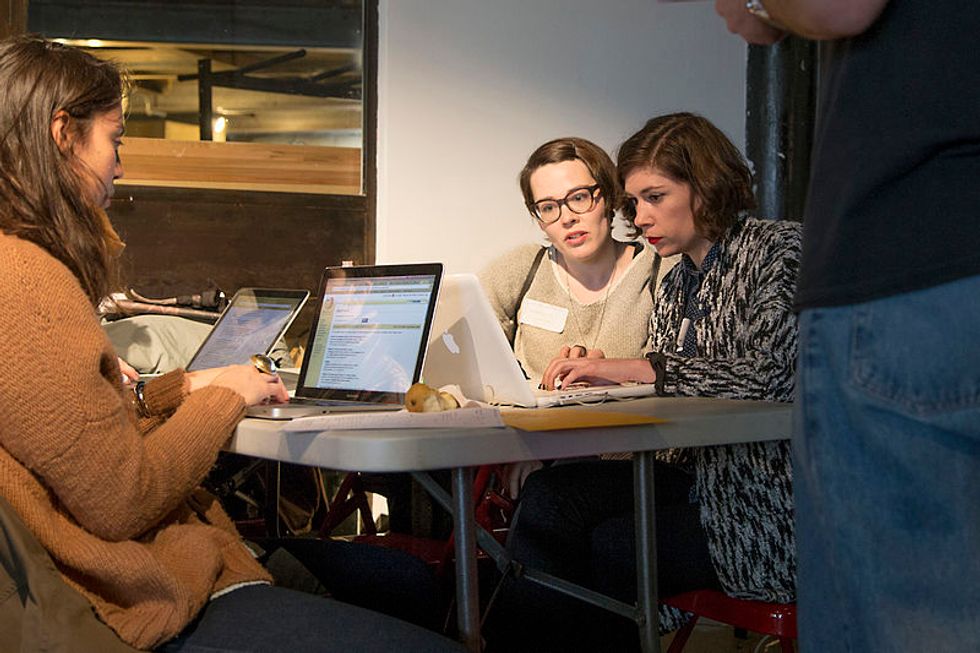 This Saturday, one tech-savvy group is hoping to correct a major gender imbalance on the internet. After the recent, much publicized GamerGate controversy, in which several female developers and cultural critics were victims of a “sustained campaign of misogynistic attacks” and advanced trolling, this help is certainly needed. The Art+Feminism Wikipedia Edit-a-thon, currently in its second year, is an all-day mass update of Wikipedia entries pertaining to art and women, meant to increase female involvement with, and coverage on, the predominantly male website. Wikipedia’s problems with gender distribution are legendary, and a 2011 survey by the Wikimedia Foundation found that less than 8.5% of contributors were female. This has led (by default) to a paucity of entries on seminal women—especially in the arts. To help rectify this, on March 7th, the Museum of Modern Art (MoMA) will turn the Dorothy and Lewis B. Cullman Education and Research Building into mission control for a vast international effort to help promote, create, and edit articles on female artists and movements. At last year’s event, participants at 31 locations created more than 100 new articles and added content to another 90. This year’s Edit-a-thon, falling conveniently on International Women’s Day weekend (March 7-8, 2015), will incorporate 55+ satellite events internationally, taking place simultaneously at the Stedelijk Museum in the Netherlands, the Dowse Art Museum in New Zealand, the National Museum of Women in the Arts, Washington, DC. and many others.

The project was first conceived of in October 2013, when Siân Evans, coordinator of the Women and Art Special Interest group for Art Libraries Society of North America, and writer and curator Jacqueline Mabey first discussed potential art and feminism projects in homage to the Ada Lovelace Day edit-a-thons. Mabey brought the idea to NYU professor Michael Mandiberg, known for his use of Wikipedia in his teaching, who quickly joined up, offering his new media expertise. Mandiberg then recruited curator Laurel Ptak, a cyberfeminism fellow at Eyebeam, the center for art and technology in New York City. Later, Dorothy Howard, METRO’s Wikipedian-in-Residence and Open Data Fellow joined as well, and Richard Knipel of Wikimedia NYC rounded out the team.

Two editors hard at work at the Wikipedia Art+Feminism Edit-a-thon, at Eyebeam in New York City.

As Mabey mentioned recently, “This project also came on the heels of a very public debate about structural sexism in Wikipedia. [This] began when writer Amanda Filipacchi wrote a New York Times op-ed on a problematic editorial practice being implemented by a number of Wikipedia editors: women were being removed from the ‘American Novelists’ category and moved into a subcategory for ‘American Women Novelists.’” Filipacchi’s piece set the internet on fire, sparking a mass call for reform. “At the same time,” continues Mabey. “Wikipedians were having an entirely separate conversation on Wikipedia about whether to change this practice of sub categorization. These conversations were worlds apart. We wanted to help give people the training to shape the conversation directly on Wikipedia.”

The Edit-a-thons so far have proven extremely successful, capturing the attention of women in tech as well as the Wikipedia Foundation itself, which recently awarded a grant to the group to create +Feminism, an infrastructure permitting the event to be replicated by others.“The response has been overwhelmingly positive,” says Mabey. “A few trollish sub-reddits here and a confused Guardian article there, sure, but ultimately, what we’re doing isn’t that radical: we’re editing articles on Baroque painters and adding citations to entries on important dada artists.” Simple enough, yet the project is not just radical, but urgently needed.

In the 21st century, when women have unprecedented freedoms, they are still marginalized, not just in the art world, but also on the digital plane, often relegated to a footnote or brief citation. While we’re still a distance from common-sense realities like equal pay for women, comprehensive childcare, and a reproductive rights bill, at least the digital world will be a slightly more female-friendly place after this weekend.

A discussion of strategy at the Wikipedia Art+Feminism Edit-a-thon, at Eyebeam in New York City