Mattel adds two Barbies with disabilities to its new line of dolls.

Mattel adds two Barbies with disabilities to its new line of dolls. 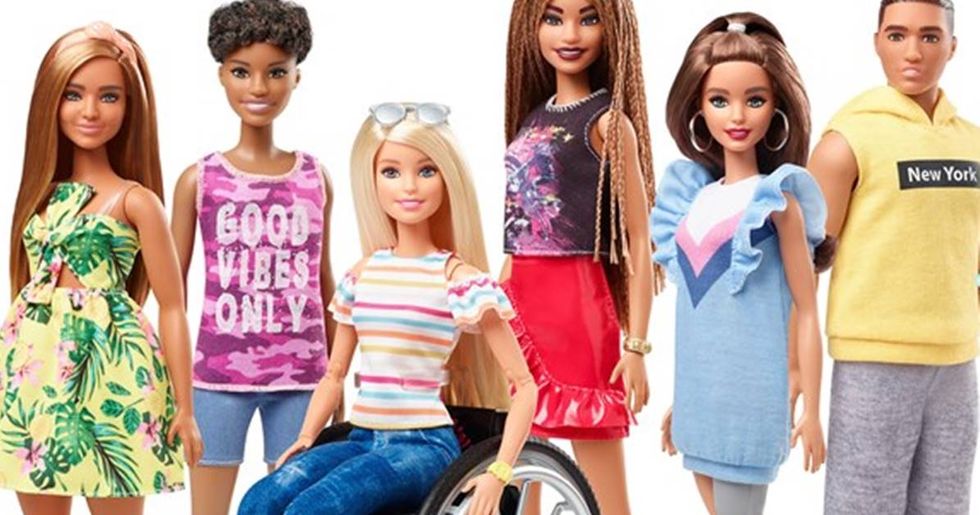 Mattel’s Barbie dolls have long been a point of contention for advocates who don’t feel she represents real women. On Monday, the company announced it will take another step forward to rectify this with a new line of Fashionista Barbies, which will include different body sizes and dolls with disabilities.

Among the new line of Barbies are dolls with darker skin tones, textured hair and a “curvier” body size in addition to two dolls with disabilities — a wheelchair user and Barbie with a removable prosthetic leg. According to Kim Culmone, Mattel’s vice president of Barbie Design, these dolls are another step toward a more inclusive toy that represents the diversity of its customers.

“A wheelchair or doll in a wheelchair was one of the most requested items through our consumer … hotline,” Culmone told Teen Vogue. “It’s important to us to listen to our consumers.”

Its just an update on an old idea! Fantastic to see it's avaliable again though. 'Share a smile Becky' was so important for me growing up, she made me realise I am 'normal'. pic.twitter.com/VFvTytiJ0t

This isn’t Barbie’s first foray into trying to make more inclusive dolls. In 1997, Mattel introduced its first wheelchair-using doll, initially branded “Share-a-Smile Becky.” Becky was a friend of Barbie’s who used a pink wheelchair with purple-accented wheels. According to the Chicago Tribune, Becky was a hit, selling an estimated 6,000 units in her first week.

However, Mattel didn’t consider making the rest of the Barbie world accessible to Becky. Before long, young women discovered the Barbie Dream House door wasn’t changed to fit her wheelchair. The toy elevator was the same story. At the time, Mattel said they would investigate updating the Barbie world to be more accessible, but 20 years later, the popular accessories hadn’t been updated.

Becky then transformed into “I’m the school photographer Becky” followed by “Sign Language ‘I Love You’ Becky” and “Paralympic Becky,” according to Studio 360. But in 2017, Becky was discontinued, along with Barbie’s efforts to be inclusive. Mighty contributor Amy Keys expressed how disappointing it was when Mattel chose to discontinue Becky as opposed to make its toys truly accessible in her article, “When I Heard Why ‘Share a Smile Becky’ Was Discontinued.” Keys wrote:

Instead of fixing the problem, Mattel just decided to do away with Share a Smile Becky. What kind of message does that send to those of us who use a wheelchair? It’s easier to get rid of the person with the disability than fix things to make it work. No, I’m not hurt and I’m not offended. I’m just annoyed and frustrated. It seems this huge company has no problem making it clear that deleting the person with the “issue” is easier than including us.

It seems with the newest line of inclusive Fashionista Barbies, Mattel is looking to rectify its lack of representation of people with disabilities. The Barbie who uses a wheelchair uses a chair with a short back and realistic design, and both dolls with disabilities are fashionable versions of the classic Barbie, which was originally introduced in 1959.

According to Teen Vogue, Culmone worked with disabled people to design a Barbie doll that would be a more accurate presentation. Barbie’s team worked with UCLA to design her wheelchair, which will fit any Barbie in the “Made to Move” collection. Culmone did not say if the new wheelchair will fit inside the Barbie Dream House or other accessories.

Mattel also worked with Jordan Reeves, a 12-year-old who has a prosthetic arm. It was Reeves’ suggestion that Barbie’s prosthetic leg be removable for a more realistic doll.

According to Culmone, the newest Fashionista Barbies are just another step in the brand’s mission to better represent and empower young women.

“The feedback we got about the doll and the brand was not in line with what our intentions were. We took that really seriously,” Culmone said. “It is a continuation of our mission to really show all girls they have limitless potential, that it’s not the end. This is just a continuing commitment that’s about the present and the future.”

The new Fashionista Barbies will be available in Fall 2019.