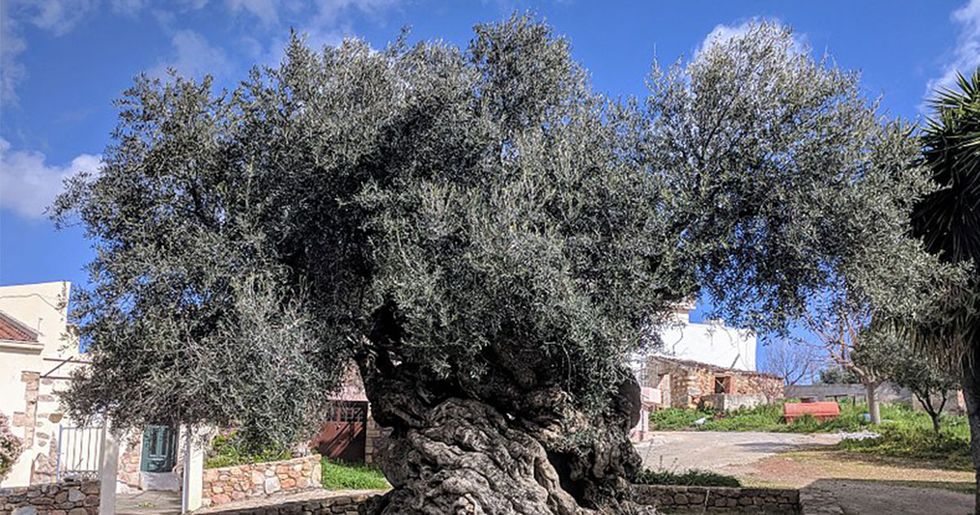 Olive trees have been considered a symbol of immortality dating back to ancient times, but one olive tree might actually be immortal.

The Olive Tree of Vouves, located in Ano Vouves on the island of Crete in Greece, is over 3,000 years old and shows no signs of heading into retirement anytime soon. The ancient plant still produces olives. And yes, you can get olive oil made from the fruit of this tree.

It's hard to say exactly when the tree's birthday is. The heartwood of the tree has rotted away, but a tree-ring analysis of the remaining layers found that it's at least 2,000 years old. Scientists from the University of Crete think the tree might be closer to 4,000 years old, but the official sign in front of the tree says the plant is 3,000. What's a thousand years when you're that old?

Two cemeteries from the Geometric Art period (back when geometric motifs in vases were all the rage) were found not too far from the tree, and might give us some clues as to how old the tree is. The Geometric Art period lasted from 1100 to 800 B.C., which means the tree was likely planted between those years. It is theorized that the tree was a “centerpiece" for the cemeteries.

It's not unusual that this tree has been basically immortal. Olive trees are very resilient. Not only are they drought, disease, and fire resistant, they also constantly renew their wood. It is for these reasons that so many olive trees were planted in the region.

If you want to see the tree for yourself, you're more than welcome. The tree became a protected natural monument in 1997, and a museum containing traditional tools of olive cultivation was set up in 2009. Over 20,000 people visit the tree each and every year.

We doubt eating the olives from the tree will grant you everlasting life, so if you're looking for actual immortality, you might want to search elsewhere.