Meet the All-Women Bike Crew Running Gentrifiers Out Of Town

The group is the subject of a new documentary. 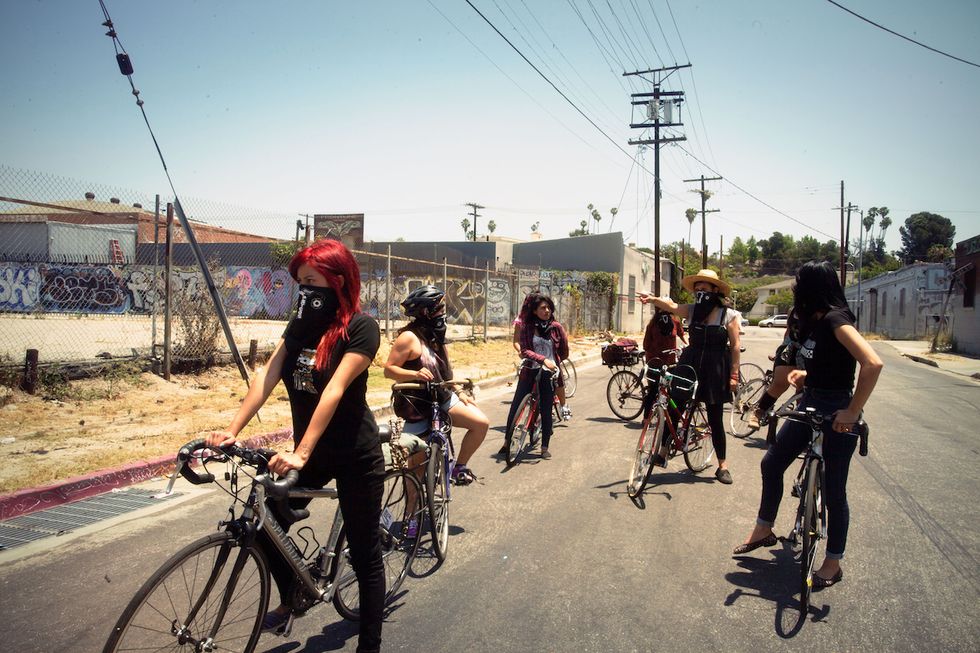 Almost six years ago, Xela de la X, a local Los Angeles community activist and musician, organized the first Luna Ride, a nighttime bicycling event that takes place beneath the full moon. This event marked the founding of the Ovarian Psycos, a collective of brown and black women who are reclaiming the night, the streets, and cycling, as their own in a city that is famously hostile to both cyclists and women of color. The Ovarian Psycos are no novelty, however—they’re representative of a new shift in the world of cycling, which has a reputation for being excessively white and male-dominated.

Since that first Luna Ride, the Ovarian Psycos have been staging cycling events across the pothole-ridden streets of Los Angeles; one of the more notorious rides, Clitoral Mass, has become a national event, taking place in six cities around the country. This kind of provocative branding has garnered them plenty of attention from the local cycling community, and not all of it has been favorable. But founder De la X (her name, a pseudonym, is an homage to Malcolm X) and her comrades are unperturbed by these criticisms, concerned only with the health of their collective. Their struggles to helm a cycling community for women in the neighborhood of Boyle Heights is depicted in a new documentary by directors Kate Trumbull-LaValle and Joanna Sokolowski, called Ovarian Psycos, which premiered this past weekend in Austin at SXSW. GOOD spoke to De la X about the Psycos, the film, and the fight for mobility and access (this article contains spoilers of the documentary).

How would you describe the Ovarian Psycos to people who aren’t familiar with what you do?

It’s a collective of knuckleheaded women, women of color, brown women, black women, who give a fuck about their community and who give a fuck about the next generation. We’re placing ourselves within the historical context of our ancestry, of the legacy of the women that came before us, and understanding our place and position currently in our communities. The younger girls coming up, they know that this didn’t start and it didn’t end with Ovarian Psycos. We’re just one in the long lineage of brujas, of knuckleheaded, at-risk, psychotic, radical—whatever, however you want to describe us.

We work a lot with many, many different organizations and different circles in Los Angeles and beyond. There’s mad spaces, mad collectives in L.A. flourishing, really being intentional about linking with each other, and letting it be known to potential gentrifiers that we do not come alone. We will do whatever we need to do to protect our neighborhood and protect our community.

What’s the significance of cycling in that mission? Why bicycles?

Bicycles because, first and foremost, we’re a working-class community, so for a lot of us, that is our mode of transportation. Bicycles are also very key in the sense that we as women, women of color specifically, in those areas—we were brought up with a fear of movement and of the spaces we inhabit, a fear of navigating them. We use the bicycles to say, “We will be fearless! We will inhabit every space, and be mobile, and have access.”

Access and mobility is very important to us, because that’s been taken from us. It’s been a very limited experience for most of us growing up. I don’t want my daughter growing up fearful. I want her to fucking navigate. We run this shit. And we have sisters that will run this shit with us.

How can the mobility of people within cities pose a challenge to gentrification?

We really need to engage in further exploring that conversation. First and foremost, one of the telltale signs of gentrification in our communities is [the appearance of] bike paths. In one sense, here are bike paths that are supposed to be meant for people. Our people are on bicycles. They need their own lane. And the motherfuckers in cars need to respect the fact that we’re here too.

So certain city plans to bring in bike racks or bike lanes can facilitate the process of gentrification?

Exactly. I feel like a lot of mobility folks—it can be like a “Rainbow Coalition” for bikes. Like, “Can’t we all just get along? Look how beautiful it is now.” And it’s like, yes, it’s beautiful, but for who? For whose access? When the price of rent and the price of our homes are going up? When police are still targeting black and brown youth, who the fuck is this beautiful scenery meant for at the end of the day? It’s not for us. Obviously, it’s not for us.

I’m sure there are similar efforts in New York or Brooklyn, or wherever, but I feel that Ovarian Psycos, specifically, is a unique product of L.A. Why do you think that is?

When you’re talking about East L.A., Boyle Heights, there’s a very strong history of social justice movements, where we’re not going to be your stereotypical, docile Mexicans. We come from that. I think that’s what makes it so unique. We’re coming from this legacy of rebellion. Of revolution. Of stand up to a fucking pig and chant down the system and reclaim [our] agency.

How did the film get made? Who approached you and why did you say yes?

[Directors Kate Trumbull-LaValle and Joanna Sokolowski] approached us. They were white. To be honest, we didn’t say yes. We said no from the gate. We want women of color to represent and document other women of color. But the truth of it is that we knew women of color filmmakers, badass fucking filmmakers that came from our hood, [but] they were busy with their own projects.

It was a long process to build our trust with [Kate and Joanna] and even to get me on board. I was like “I don’t trust them. What’s their angle? What’s their agenda? Who sent them?” But after a period of time of building with them and knowing their own backgrounds—like, Kate has a Mexican mom that grew up in Chihuahua, Mexico. She was also working [on] the documentary No Más Bebés, about the forced sterilization of women from East L.A. So I was like, ok, they got some legit credentials. They have an invested and sincere interest in documenting the work that we’re doing—not with their own agenda, not with their own spin on it. Just an honest account. The moment that I felt comfortable with that, then I agreed.

One of the most interesting moments of the documentary is when that guy, who was wearing the CicLAvia shirt, was complaining about Ovarian Psycos. The organization has clearly rubbed some people the wrong way. Is there contention between Ovarian Psycos and other cycling organizations?

We had a lot of pushback. We had a lot of folks talking mad shit about whatever we were doing. Not only talking that shit, but minimizing the work [that we were doing] and ridiculing our efforts. Even saying that we’re not “real cyclists.” And we didn’t give a fuck, at the end of the day. We were not looking for the cycling community’s validation. That was never on our agenda. We want folks to learn, like, survivalist shit. These topics are fucking real. How can we address them? Laugh at us. We don’t care. We’re going to continue to do that work that we know has to get done.

The film’s narrative is centered on your relationship with the Psycos, and it documents your departure from the organization and stepping down as leader. How did it feel to see that depicted on the screen?

Painful. Even through the process, I was reliving a lot of trauma that I wasn’t necessarily ready to revisit. It was a bittersweet type of situation. When I stepped down, it was also painful and bittersweet, in the sense that I stepped down specifically to prioritize my relationship with my daughter. I was really neglecting that. I get choked up just thinking about how I was just neglecting her because of the work that I do. I work a 9-to-5 at a shelter for homeless kids. On top of that, I do my music. And on top of that, I was cycling. So my daughter got the really shitty end of the stick for a couple of years. I had to be honest about the fact that she needs me. She had to be my number-one priority.

What’s your current involvement with the Ovarian Psycos? Are you still organizing with them, since stepping down?

I will organize with them until I die. Once a Psyco, always a Psyco.